Celebrating 50 years of Hobiecat sailing is quite an achievement in this day and age of instant gratification and too many recreational options for the youth. What makes the Hobie sailing class so different from others and how has it stood the test of time? One phrase comes to mind – THE HOBIE WAY OF LIFE.

It all started with a vision. Based in California, Hobart ‘Hobie’ Alter was a surfboard manufacturer who enjoyed the surfing lifestyle and lived simply to have fun. He felt that a small catamaran would add value to both. 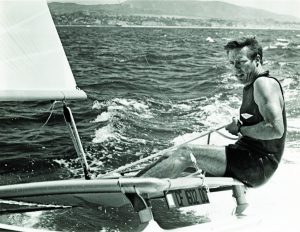 An early lack of advertising dollars in the surfboard business meant having to build and nurture a word-of-mouth reputation, which was paramount to Alter’s eventual success. He started by investing truckloads of energy into fabricating quality products.

‘We went around to all the little sailboat dealers, who wouldn’t give me 14 minutes to show my 8mm movie,’ Alter said. Catamarans had a very negative image. The movie showed the cat jumping waves and crashing into surf sailed by guys having the most fun possible with a bathing suit on.

Meanwhile in Marina Del Rey, two Hobie 14s collected dust at the largest small-boat dealer in Southern California until Alter decided to finance a hustling young salesman who, in three years, became the largest dealer in the US. The surfboard manufacturer Denny Keogh, who Alter met at the World Surfing Championship, decided to build Hobies Down Under where they’re still manufactured today. And Hank Palou, who worked for Alter shaping surfboards in Dana Point, married a French general’s daughter, moved to the south of France, and started pushing the new-concept cats into the deep psyche of French single-handed sailing. John Whitmore, a leading South African surfboard manufacturer, also started producing Hobies.

The Hobie Way of Life

‘What really made it work is we’d put on regattas, buy some guys a couple of beers, and go out and have some fun. We’d talk it up, get friends involved, teach people…’ said Alter. The first Hobie Class Association regatta took place on 4 July 1968 off Poche Beach, Capistrano, California, a local surfing paradise. A total of six Hobie 14s took part, which were all the boats built at the time. Dana Point hosted the first Hobie 14 National Championship in 1970. That year Life magazine ran an article titled ‘The Cat That Flies’, launching the Hobie Way of Life into mainstream consciousness, and Alter went into production with his Hobie 16 masterpiece. By far the world’s most popular and colourful catamaran, the Hobie 16 design philosophy was based on producing a fast, fun, stable, strong, lightweight, one-design, double-trapeze boat for mixed-gender crews that wanted sail-anywhere excitement. Mission accomplished! 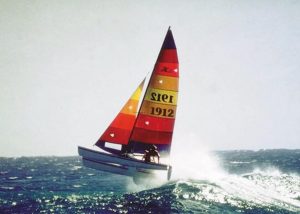 The first Hobie 14 World Championship was held in 1972 in Honolulu, Hawaii. Alter had waited four years before hosting the event. ‘I’ve always tried to avoid regattas with meaningless titles. If we’d held a world championship before then, it would not have been much more than an extension of our nationals with little competition coming from other countries. That was what I was trying to avoid.’ Four years later, at the same location, Dean Froome and John Driscoll became the first Hobie 16 world champions.

The strategy was to host world championships in exotic locations, ideally at a resort, with brand-new boats available for charter by competitors and for sale afterwards to the hosts. That’s why today you’ll still see Hobies at island resorts around the world. Over the years plastic-hulled Hobies were developed primarily for high-traffic wear and tear experienced in those locations. More recently, Hobie world championships have been held in major cities who sponsored the event.

From humble beginnings, the world’s largest one-design sailing class encompassed over 500 fleets in close to 100 countries on every continent. As the numbers grew, so did the class association with volunteer and professional help freely given at every level. In 1989, the Hobie 14, 16, 17 and 18 designs became international classes under the auspices of the International Yacht Racing Union (IYRU). 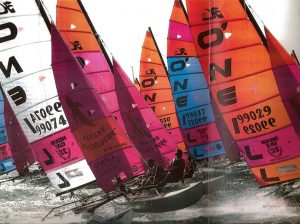 From the beginning, the Hobie class has been innovative and aggressive in its pursuit of better sailing conditions and the rules that govern them. In the early ’70s, they pioneered the use of the 720°-penalty turn (later modified to a 360°-penalty turn), enforced strict one-design (no changes) rules, encouraged multiple-level racing (A, B, C and novice) and, with the help of licensed manufacturers, supplied new boats for world championships and other major events worldwide.

The Future of Hobie Sailing

To keep a sailing class alive, you have to be innovative. Instead of hosting single class regattas, Hobie Europe recently introduced a combined multi-world and European championship that in 2017 saw the Wild Cat, Hobie 14 and Dragoon classes compete for world championship kudos while the balance of the fleet sailed for European titles. This encouraged the Hobie family to converge on one destination and sail either the hi-tech Wild Cat/Tiger or the world-renowned Hobie 16, Hobie 14 or Dragoon (for young sailors). The event was held at Noordwijk, Netherlands, a small coastal holiday town on the North Sea, 30km southwest of Amsterdam. It saw the revival of the Hobie 14 fleet with approximately 57 boats competing, of which eight boats were from SA. The fleet included three former world champions – Blaine Dodds (SA), Arnaud Thieme (FRA) and Thorin Zeilmaker (NED). Dodds finished third with Garth Loudon seventh, Peter Hall ninth and Nicholas Ryall in 12th place.

This year a similar concept of combining different classes in one World Championship was hosted in Sylt, on the the North Sea-coast of Germany. This invitational was called the Hobie World Cat Championships event and featured 10 teams competing on a Hobie 16 in the event.  South African’s Blaine and Roxanne Dodds took another world title. Blaine is SA’s most decorated Hobie Cat World Champion.

To celebrate their 50th birthday, the Hobie Cat Company is hosting a celebration regatta in October at Dana Point where it all began 50 years ago.

Volvo Ocean Race RAW | All or Nothing

Beyond Walls | Unity in Art