AS IT TURNS OUT, SOCCER’S LOSS WAS SAILING’S GAIN.

If fate hadn’t decided otherwise, Marc Lagesse would most likely have continued his teenage years growing up near Johannesburg, happily playing soccer and baseball. But a knee injury brought about an abrupt change in direction.

‘As a teenager, it’s quite a blow to be told to stop playing sport,’ Lagesse recalls. ‘But then the doctor said, “You can always take up sailing.” So it was purely by accident, actually, but I took to it like a duck to water.
It was why I got into it so late; I hadn’t done the whole Optimist/dinghy thing.’

With time logged on the Vaal Dam, fate offered a more helpful hand when the time came for military service. ‘At that time, if you grew up anywhere in SA you went to the army but because of my sailing background I was fortunately earmarked for the navy. Then I got lucky again because our commanding officer at SAS Saldanha was a keen sailor and made sailing part of the basic training, so I ended up as one of the instructors.

Military service completed, Lagesse followed a more typical trajectory in the sailing world. ‘We met the local Cape Town racing elite – people like Geoff Meek – and raced with them.’ What followed was a natural
progression, with Lagesse first working for North Sails in Cape Town; then three years later, he received an offer to race on the now legendary Simonis-designed, South African-built maxi Broomstick across the Atlantic. This phase of the sailor’s life led to work at North Sails UK and match racing with the likes of Andy Beadsworth and Eddie Warden Owen. ‘That was when I became a professional sailor,’ says Lagesse.

Phil Gutsche helped shape Lagesse’s future by giving him the opportunity to run the 60ft Warrior while studying IT, after which he opened his own IT business.

It was the Royal Cape Yacht Club’s Shosholoza America’s Cup campaign that hit the reset button for Lagesse. ‘Paul Standbridge called me up and said, “You can sail, you can turn on a computer; I think you should come and be the navigator.” So we all got on a jet and went to Valencia. 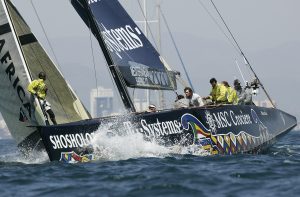 ‘It was obviously a massive opportunity,’ Lagesse acknowledges, ‘which led to a second America’s Cup campaign and my career as it is today. Would I have become a full-time racing sailor without Shosholoza? Probably not, but I would have been doing something with electronics in the marine industry. When Shosholoza came along, electronics were still seen as a black art on yachts but, fortunately, I had my head around it. As I tell anyone who wants to be a navigator, the navigating is the easy part. Keeping the system up and running is the tricky bit. It was true then and it’s still true now.’

Few professional racing sailors make their living from doing exactly the same thing over and over again, and Lagesse is no exception.

Indeed, doing the unexpected can deliver the highlights of a season – providing, of course, the calculated gamble pays off… And so it was on the 2017 Cape2Rio race, with Lagesse helping to call the shots from the navigation station on Stefan Jentzsch’s South African-designed Carkeek 47 Black Pearl. 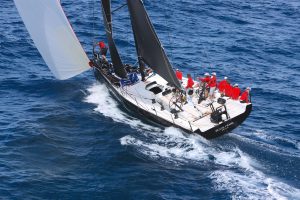 He recalls: ‘It was an interesting race for us. Traditionally you have to go around the St Helena high, which adds a lot of miles, and the forecast was pretty average, so we ended up almost sailing the rhumb line right through the high pressure. The crew were all on board with the decision, though I did get some raised eyebrows when we were going upwind on a race that’s traditionally downwind, at one point even pointing back towards Cape Town. Of course, no decision like that is made on the spur of the moment, and Lagesse had done a lot of work pre-start with weather and routing guru Marcel van Triest, whose analysis suggested the critical call would come at a designated waypoint three days into the race.

‘He is pretty damn good, and he had given me a three-day window and said when you get to this point you’ve got to decide… Nobody has a crystal ball but when we got there and looked at the forecast, we decided to follow our gut and go against tradition.

‘So, yes, it was down to me, but it’s a team sport so we win together and we lose together. It was great to have a part in rewriting the “South Atlantic in January” playbook though. Quite satisfying.’

A couple of other occasions also stood out as highlights in a busy 2017 season – the moments that race navigators live for and crews hope for. One was claiming victory after gybing off a course that had Black Pearl pointing at the finish during the Annapolis to Newport; another saw them seize a race win by 24 hours with a smart move off Corsica during the Palermo-Monte Carlo Regatta. ‘Marcel gives you options,’ insists Lagesse. ‘He should really get the credit. They are all very strategic moves, so therefore very satisfying – but, as I say, it’s the team and a fast, well-sailed boat that make you a tactical genius…’

As mentioned, variety is the spice of life, and some high spots in a season come hard earned over a period of time. One such moment was when Lagesse stepped in for Jules Salter – away on the Volvo Ocean Race – on Tony Langley’s Gladiator in the uber-competitive TP52 Super Series. 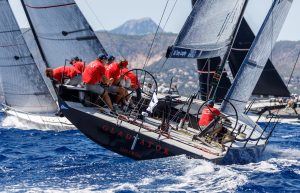 Constant improvements over a series of regattas saw Gladiator in contention for victory at the final event in Menorca, losing only to the overall season winner, Azzurra, on countback.

‘It’s great to build towards something with a good boat and a fantastic crew, and to finish on such a high note was fantastic, especially with Tony winning the owner-driver award for the first time as well,’ says Lagesse.

‘As a sailing highlight in 2017 that’s got to feature for me, it was a great experience and opportunity to sail with Tony and the boys on Gladiator.’

But, as if to emphasise the inherent uncertainty of the yacht-racing life, Gladiator’s crew all stepped off when the boat was handed over to the Ben Ainslie Racing (BAR) syndicate in preparation for the all-new monohull America’s Cup.

Lagesse remains philosophical: ‘It was bitter-sweet, but that’s part and parcel of yacht racing. That chapter is over for now.’

He has been racing on the Black Pearl once again, and Lagesse returned to the 52 Super Series for training and boat testing on Luna Rosa/Prada, racing against the new South African TP52 entry, Phoenix, raced by Hasso Plattner and his daughter Kristina, and an influx of America’s Cup teams aiming to hone their monohull skills. He also juggles a mini-maxi campaign. 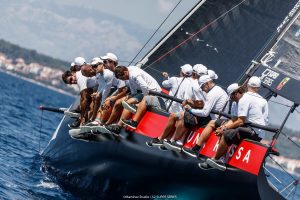 ‘I’ve got plenty on, which is great, but it’s spread all over Europe, the States and the Caribbean – I do maybe 12 regattas a season, which gives me some balance with home life,’ says Lagesse, who will operate from his spot in Mallorca that is ‘populated by a whole bunch of South Africans’.

And he adds in his usual understated way: ‘My role is not overly physical, so I have got a long career path – and long may it last! There are certainly worse ways to make money.’