If you’re a watch fan, and can identify a brand on a wrist at a distance, Panerai must be a top pick. The classic Luminor Marina, with its cushion-shaped case and brushed finish, solid lugs and polished bezel, is unmistakeable. And if you don’t confirm it by size and shape, the safety lock crown protection device (patented in 1956) will do it. Debbie Hathway takes a look at the new addition to the family – the Panerai Luminor Marina Quarantina.

An evolution in design

Today the well-loved Florentine brand continues the evolution of the design, which was first introduced for the Royal Italian Navy in the sixties, with the Luminor Marina Quaranta. What makes it special? The case size. At 40mm it is the smallest in the collection, substituting the 42mm references and adopting a style that achieves a happy medium between sophisticated and nonchalant. The slightly smaller diameter of the Luminor Marina Quaranta creates fresh appeal for the iconic timepiece.

There are three versions available in stainless steel, Panerai’s material of choice for its high resistance to corrosion and hypoallergenic properties. As an aside, the watches Panerai created for the Italian Navy during their 57-year association from 1936 to 1993 were made of austenitic stainless steel, which is an iron alloy comprising at least eight percent nickel and 18 percent chromium. It is recommended when resistance to corrosion, heat and creep is required as well as nonmagnetic properties. The material was the ideal choice for the commandos who wanted a reliable watch that could endure extreme environmental conditions.

The choice is yours

The new Panerai Luminor Marina Quaranta is launching with a white, black or blue dial. The white and black dials are paired with black straps, while the sun-brushed blue dial comes with a navy-blue strap. But that’s not all. Paneristis – as the die-hard fans are known – must have options.

Each watch actually comes with two straps – one in alligator leather and another in calf leather –carefully chosen to coordinate with each respective dial. The matte white dial contrasts beautifully with a black alligator or deep brown calf strap while the matte black dial looks super-stylish fastened with a black alligator or black calf strap. And the sun-brushed blue dial with navy-blue alligator strap and another in tobacco calf is a sure winner.

Of course their inclusion highlights another Panerai innovation – the Quick Release System that enables the proud wearer to change straps and buckles in seconds, without tools. It’s the ultimate accessory soon to be further enhanced when a range of colourful, flexible and lightweight rubber bracelets becomes available. The extension of the strap options simply add even more versatility to the watch, which now takes on a sporty aesthetic.

The small seconds indicator at nine o’clock remains a key differentiator for Panerai watches, particularly the Luminor Marina. The position of the date indicator is also fixed at three o’clock. The Luminor Marina Quaranta is powered by a thin (4.2mm) automatic winding P.900 calibre with three-day power reserve. The movement is invisible behind a closed caseback. 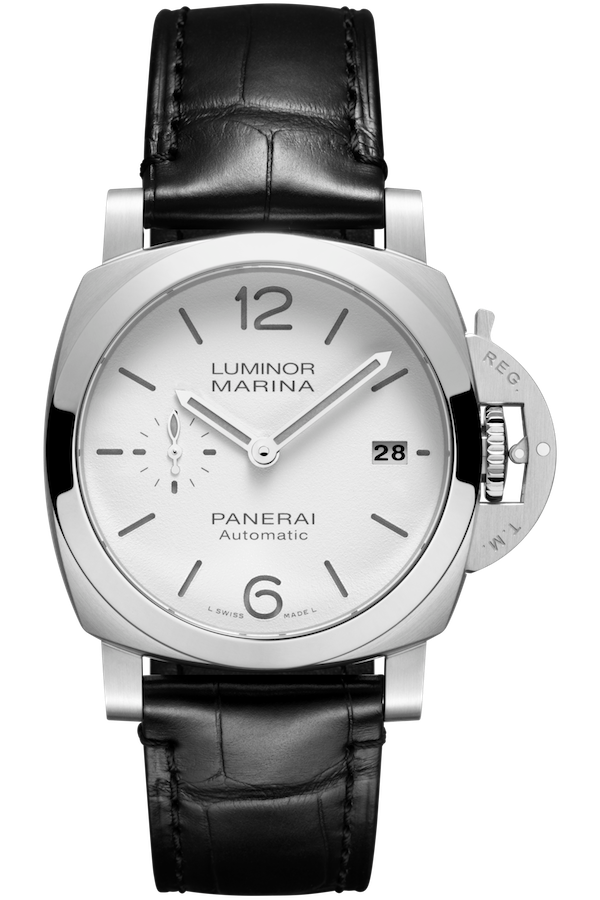 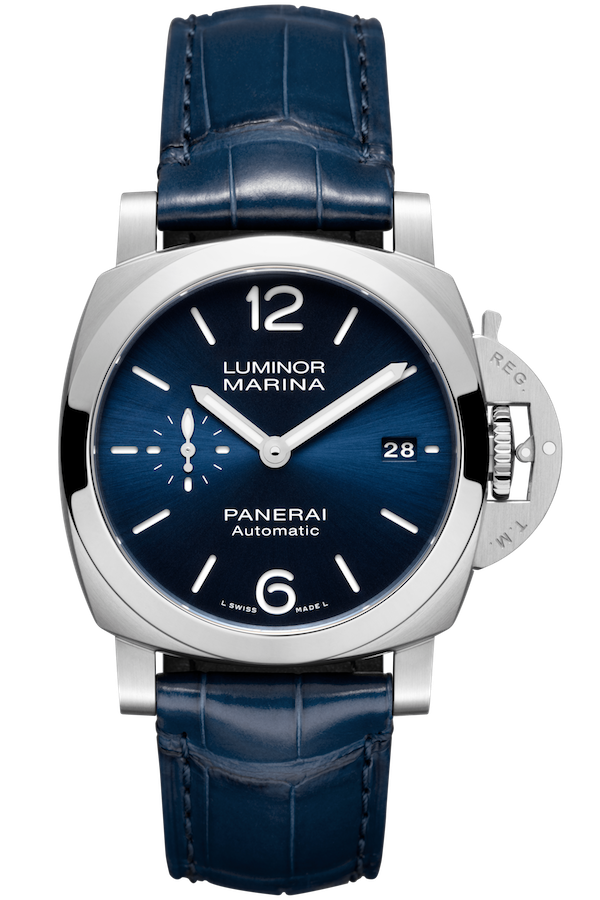 Features common to all three models

Dial: Date at 3 o’clock and small seconds at 9 o’clock 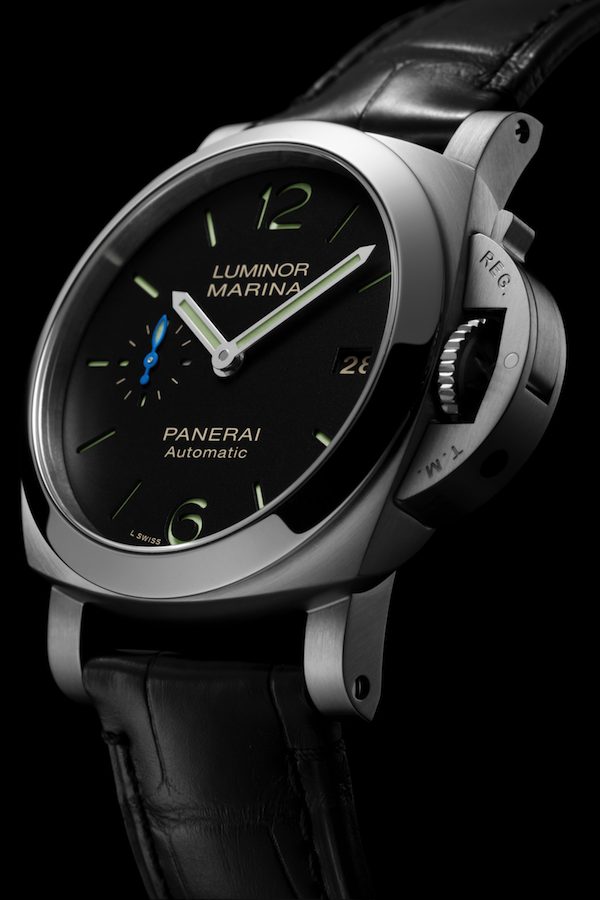 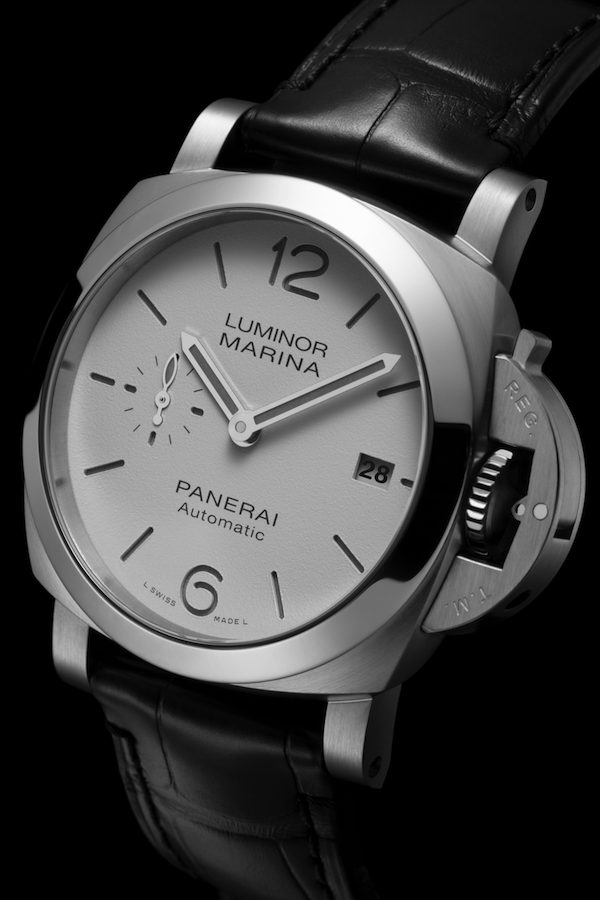 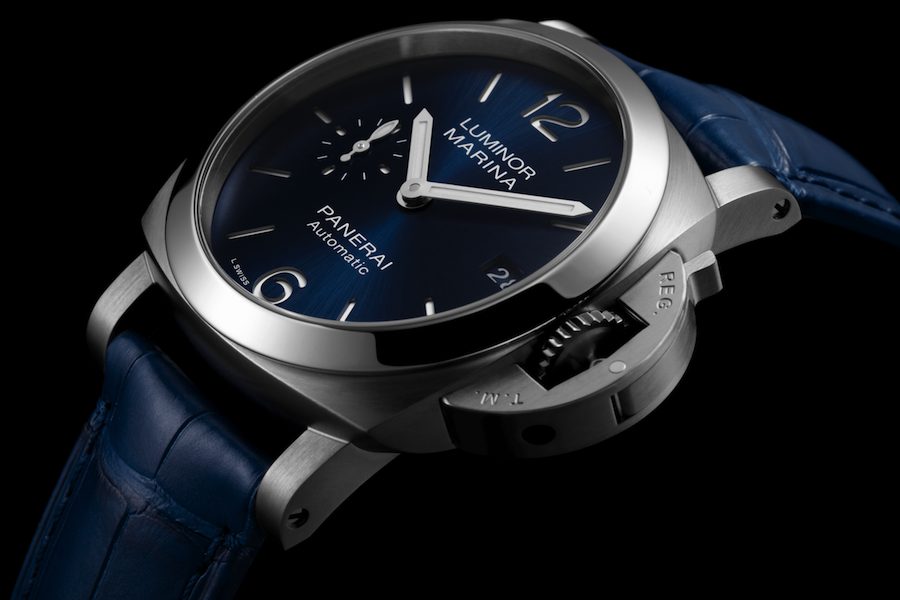 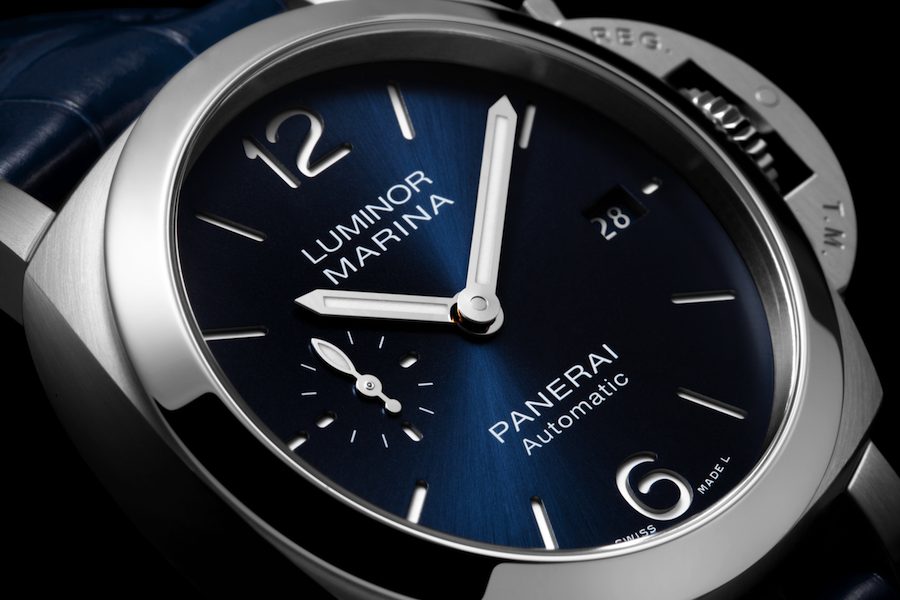 Giovanni Panerai opened his first shop at Ponte alle Grazie in Florence, Italy, in 1860. Additionally, it served as a workshop and the city’s first watchmaking school. It moved to its current location at Piazza San Giovanni in the 1920s under the name “Orologeria Svizzera”, which has been synonymous with top-quality timepieces in the city for more than a century.

Panerai’s commitment to supplying the Italian Navy and its specialist diving corps with precision instruments inspired several innovations. One of them was the radium-based powder developed to highlight dial detail in poor light, which led to the Radiomir patent – one of many to be filed over the years.

The Luminor patent was approved in 1949, the name eventually adopted in reference to the luminescent substances used on these watch dials. Luminor became the Panerai diving timepiece, immediately recognisable by the crown-protection bridge.

In 1972 Officine Panerai became the official brand name. And in 1992, the brand entered the civil watch market with three collections, one of which was the Luminor Marina, thereby shedding responsibility for maintaining military secrecy on these products.

The Richemont Group acquired Officine Panerai in 1997. Today Panerai develops and crafts its movements and watches at its Neuchâtel manufacture. Panerai timepieces are sold worldwide through an exclusive network of distributors and Panerai boutiques.

Read about Panerai’s involvement in the 36th America’s Cup.