Australian solo-sailor Lisa Blair has claimed the world record for the fastest unassisted circumnavigation of Antarctica. She completed the journey in 92 days, 10 days faster than the previous record holder.

The Sydney sailor set out on the journey from the Western Australian coastal city of Albany in February, aiming to break the world record for the fastest unassisted voyage around Antarctica.

The previous record was held by Fedor Konyukhov, who completed the journey in 102 days, 56 minutes, and 50 seconds back in 2008.

Lisa first attempted to break that record in 2017 but was forced to abandon her goal when her yacht’s mast snapped in rough seas near South Africa. Blair said it was a tough pill to swallow, but it fuelled her motivation to try again.

Five years on, Lisa has succeeded in claiming the title, beating the previous record by 10 days, finishing the voyage in just 92 days, 18 hours, 21 minutes, and 20 seconds.

“I’ve done it, and I’ve shaved ten days off the record! This is a pretty big deal for me,” she said.

“I first committed to the goal of trying to set this world record in 2014, so it’s actually been an eight-year journey.”

Waves the size of a five-storey building

Lisa experienced a mix bag of weather, with some calm days between what felt like endless storms.

“This time around it was actually more aggressive conditions than I experienced last time. I had a lot of blizzards, snow storms, waves the size of a five-storey building. The boat got picked up and tossed down several times. I really wasn’t sure if I was going to take substantial structural damage to the boat.”

The record attempt was not only an achievement for Lisa, it was an opportunity to spread awareness of climate change, in the hope of inspiring individuals to take positive environmental actions.

Her vessel, named Climate Action Now, is decorated with positive climate action acitivies submitted by the community. Throughout her journey she collected micro-plastic samples and meteorological data to assist with global weather monitoring.

“When I talk to people about our environment, and the crisis we’re in, most people feel like it’s such a big problem that they’re individual effort isn’t going to make a difference. For me, the power of the campaign is to show people that as  individuals we have the power to make change. It’s about empowering people to take that positive step in the right direction.”

“It was just an incredible adventure, and I think I want more of it.” 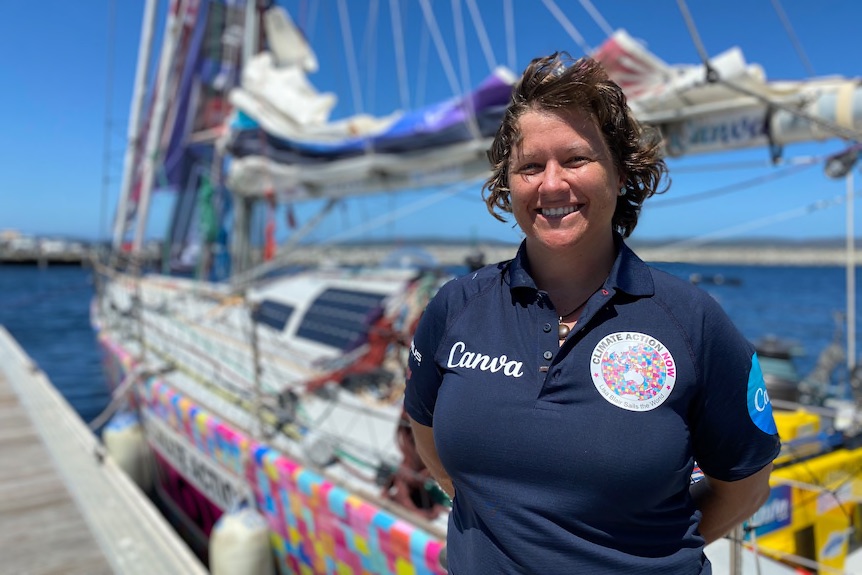 As reported by ABC Great Southern.