The first regatta they sailed was the 29er EuroCup during Kiel Week in Kiel, Germany. This was their first ever international competition, after only sailing the 29er together for 6 months. Their goal was to get an idea of where they stood in the international fleet.
After 6 qualifying races with 3 podium finishes, they made it into the gold fleet (top 30 out of 127) for the finals. After sailing another 6 tough races they achieved a final position of 27th overall.
They went on to Denmark to compete in the 29er European Championships. Competing against 164 other boats, they were expecting a tougher, bigger fleet, and they were not disappointed. Racing was gruelling with very strong competitors and tricky wind and ocean currents but they still managed multiple top 10 positions. Even though they had a few bad results in some races, they qualified for the silver fleet, finishing 71st over all (out of 165) and 15th in the u/17 age group.
Kiel Week

“What a regatta, this was our first ever overseas regatta and our goal was to get a picture of where we are positioned in the international fleet after only sailing this boat together for 6 months. I would say that the event was one of the most organised regattas that Sean and I have ever experienced. Each class of boat had a specific boat park and flag pole for dedicated signals to that specific class. The rules were strict but they made everything flow very well. The race committee was always a step ahead and the race courses were laid very quickly. Start procedures were always on time.

Lining up on the start line before the start of the first race you could just feel the pressure and tension between all the boats. There was a great hustle and bustle and people screaming and shouting out rules and protests everywhere, but as soon as you sail over the start line all the shouting calms down and everyone is focused on trying to make their boat go as fast as possible. Throughout the regatta we managed to achieve a few top 10 places. Some of those were even top 5s! This obviously gave us quite a confidence boost. After 2 days of qualifying races we managed to make it into the gold fleet, which we were so happy about”. 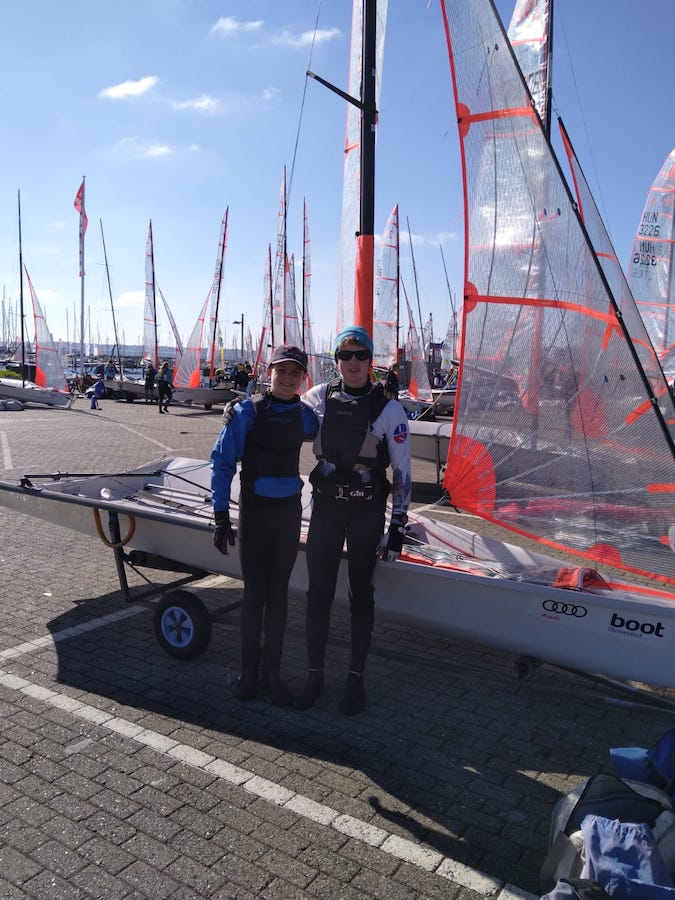 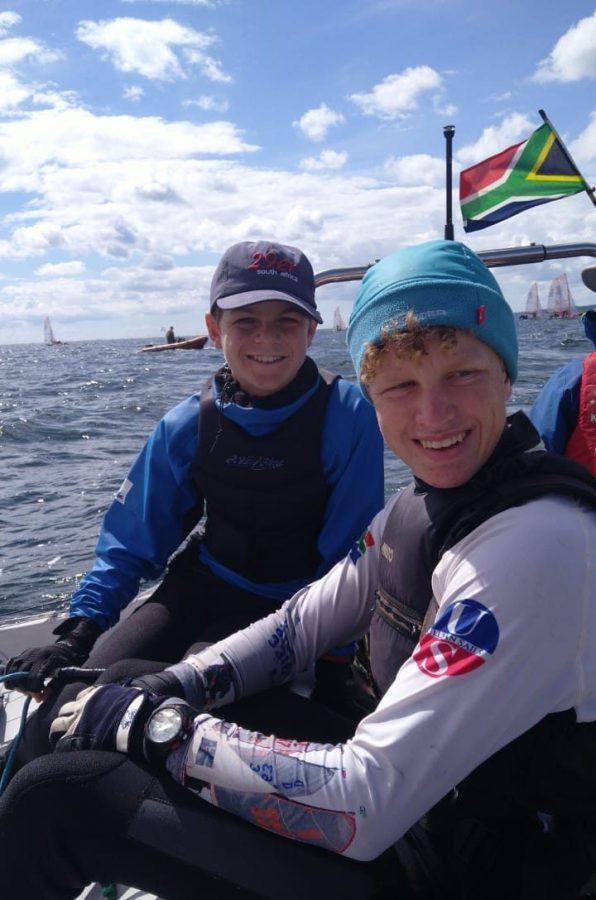 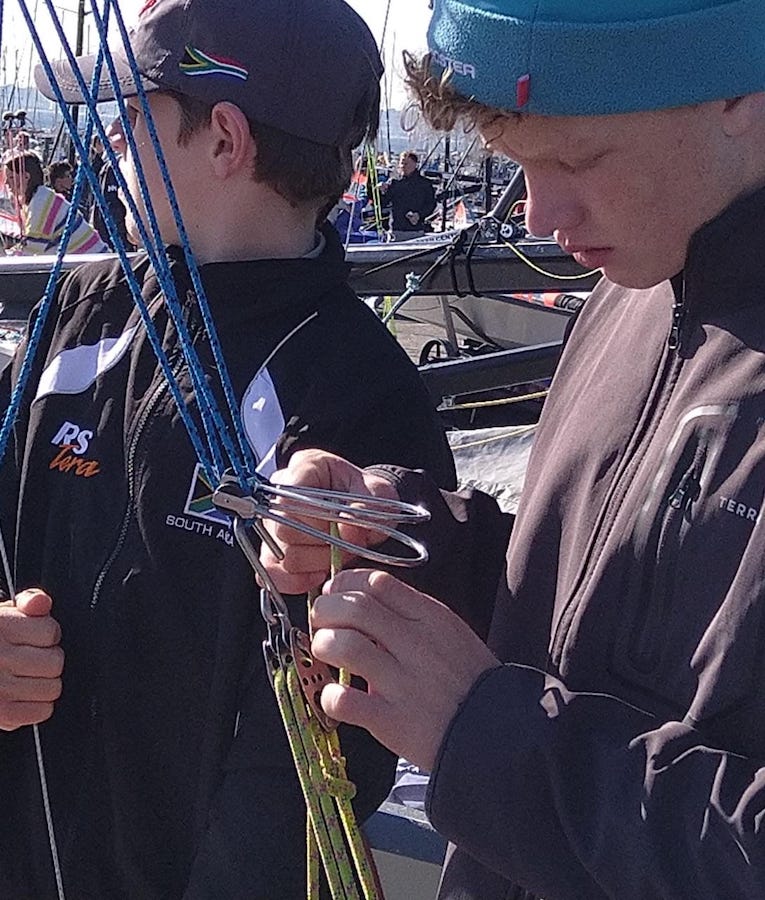 “We expected the level of competition in the gold fleet to be a lot tougher and way more competitive. Throughout the finals races we discovered that we were competitive with the other boats, but we have plenty of things to work on like silly mistakes here and there. As we raced in the gold fleet the results at the end of each day showed us that we were getting better and better after each race. Stealing with our eyes and ears, soaking in as much up as possible, we were learning very quickly. On the last and final day in the gold fleet we were able to acquire a 6th place and very nearly a potential top 10, but unfortunately we capsized at the leeward gate on the way to the finish. All in all, we made 27th position in the gold fleet, which was insane. Keep in mind that some of these guys we were competing against have been sailing this boat for 2 or 3 years, and are nearly 18 years or above. So that was an amazing achievement for us, but we’ve still got a long way to go”.

“We went into the Europeans expecting a bigger and more competitive fleet with more experienced, older sailors. We had a week of training before the regatta started to get our head in the game where we trained with various overseas teams, mainly the Hong Kong team. The winds ranged from light to strong with a 1 to 2 knot current throughout the regatta. Very little chop and no swell. These were champagne sailing conditions. On race day one we found out how much more competitive these sailors were, and we had just touched the surface of it. We had a few bad races and a few really good ones. We had 3 days of qualifying races where we qualified for the silver fleet.

Sean and I were happy with this result because it meant that we were in the top half of the fleet, which was our goal. We tackled the finals races with the mindset to do as well as we can and try to aquire a few top 10 results. Even though we had a few bad results, it was a very good outcome. We ended up positioning 71st over all and 15th in the u/17 age group.

Sean and I are very proud of ourselves. We’ve learnt an incredible amount on this trip and are we willing to get back out there and keep pushing and training as hard as we can to try get to the worlds in 2023”. 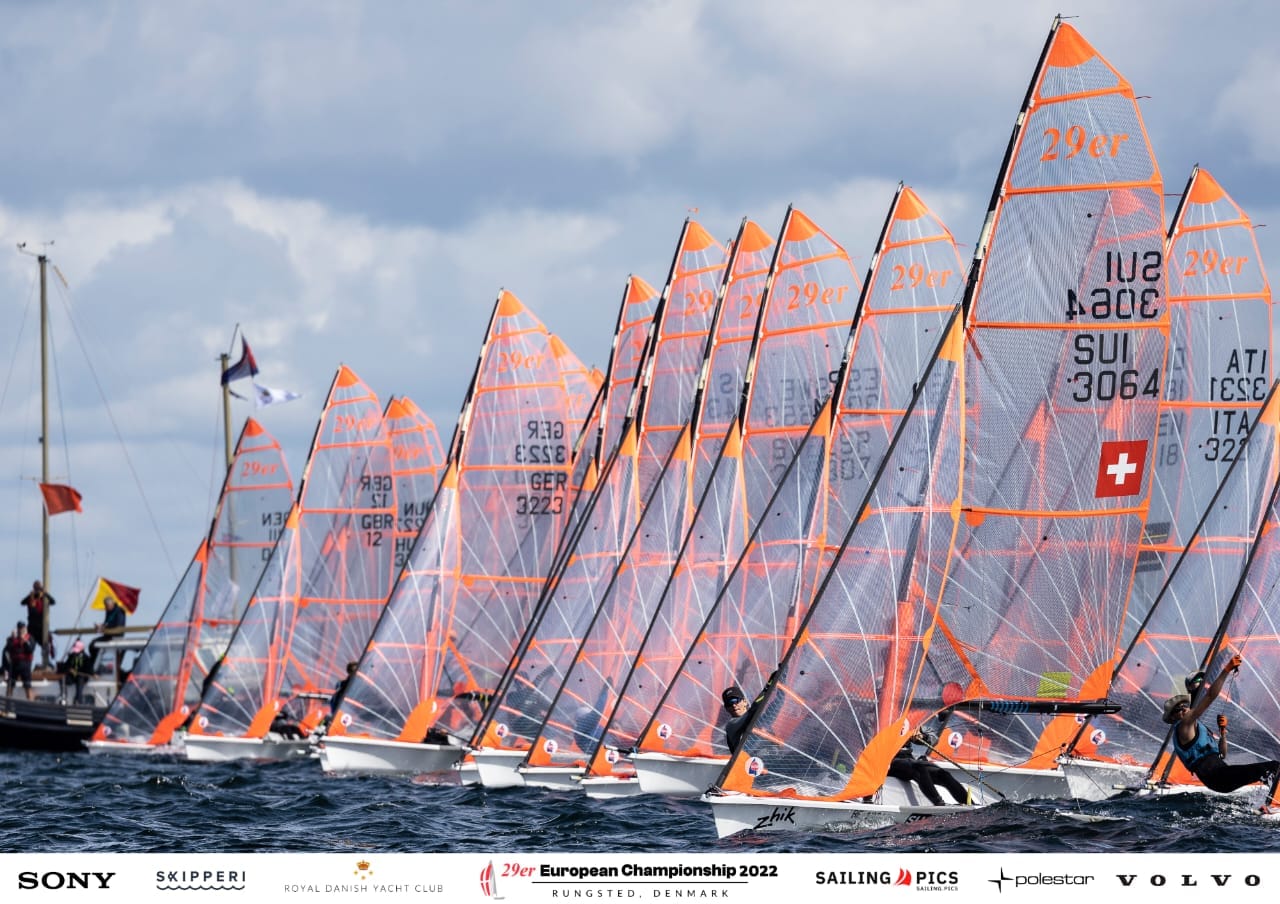 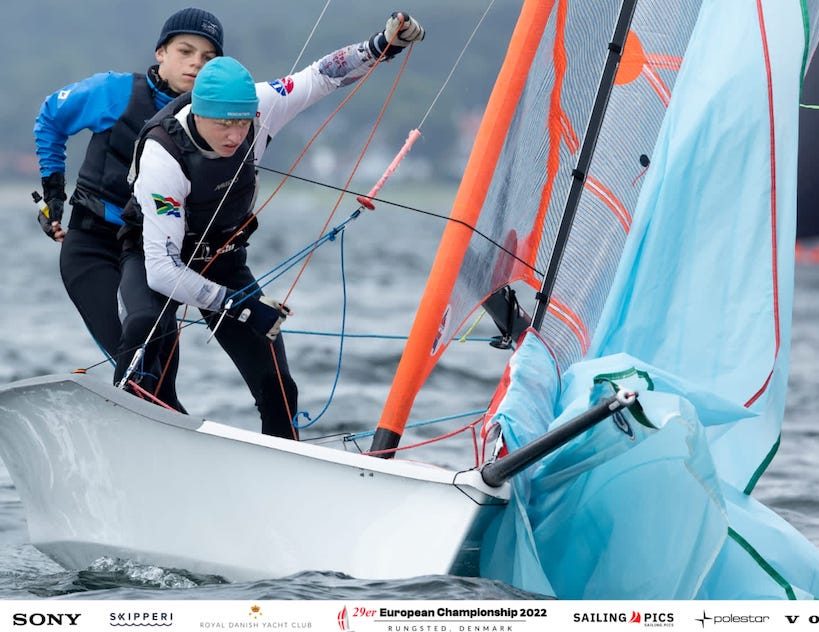