South African sailor Michael Giles has racked up quite a winning résumé in both offshore and inshore sailing during his more than 35-year career on the water. He has also lent his considerable expertise to project-managing boat builds, offering logistical support to racing teams and individuals, and provisioning teams for ocean-crossing ventures. By his own admission, he likes to ‘mix things up’, and by all accounts is extremely good at it.

He learned to sail under the guidance of his father Vaughan at the Swartkops Sailing School in Port Elizabeth. Mike moved up through the junior classes, sailed dabchicks in the latter years of high school, and enjoyed plenty of windsurfing, before doing his National Service at the SAS Saldanha naval base in 1991 and attending the University of Port Elizabeth where he studied a BSc in Construction Project Management from 1992 to 1995. Meanwhile, he sailed lasers for which he had developed an instant affinity, and coached the young South African Optimist team for the World Championships that took place in 1995 in Mariehamn, Finland, and on home waters in Langebaan in 1996.

SA had just been invited back into world sport, resuming attendance at the Olympic Games in 1992. ‘We had come out of an era of no international competing; we had been isolated in terms of the bigger picture,’ he remarks. Doors were opening for the country and for Mike personally. He campaigned for both the 1996 and 2000 Olympic Games in the Men’s Laser event, but as he explains it, ‘the pool of competitors is like a pyramid’. There are enough sailors with the skills set to sail in regattas – and there was fantastic sailing in SA at the time – but only one person is chosen to represent the country, and it was David Hibbert and Gareth Blanckenberg respectively who got to go. ‘But the upshot of this was that I had six years of brilliant high-level sailing,’ he adds.

A Hand in Design

Before undertaking another major sea venture, which was campaigning for the 2007 America’s Cup, Mike was asked by Peter Johnston, based in Newport, Rhode Island, to project manage the first two hulls for a new boat for himself and Clint Clemens, with building earmarked to take place in Cape Town. Mike was flown over to join them to discuss and draw up specs for what was destined to be something unique, a boat designed and built for speed, efficiency and high-performance cruising. It was a Morrelli & Melvin design, with Harvey Yachts, Cape Town, commissioned for the first two builds. The 62-footer was light, fast and exciting to sail, covering up to 350 miles a day. ‘It was four years of high-tech cat building,’ Mike recalls. So the timing for the start of SA’s inaugural America’s Cup campaign – and with it the opportunity to immerse himself in sailing again – couldn’t have been better. He moved to Valencia, Spain, in mid-2004, to join sailing manager Paul Standbridge and the Shosholoza crew.

The Challenge of the Americas Cup

While Mike acknowledges that the crew had its challenges, not least of which was their David-like status facing the well-established Goliaths of sailing – Team New Zealand, and yachts of the likes of Prada and BMW Oracle – the world match-racing tour events in the run-up to the America’s Cup saw Team Shosholoza produce high-level sailing all the time. ‘Paul was a fantastic teacher who was very good at bringing out the best in everyone. He brought good calibre people in to mentor us. It really was one of the nicest sailing times from a South African perspective,’ Mike explains. Team Shosholoza completed her America’s Cup campaign with a win over France’s Areva Challenge in the Louis Vuitton Cup to finish as the most successful first-timers in the history of the event. This victory ensured a seventh place finish.

A General View on the World of Sailing

Mike concedes he is a sailor at heart, but he possesses the unique ability to morph into a variety of roles because of his experience of day-to-day life on the water, his understanding of boat builds from design stage to building and onto sea-trial testing, performance evaluation, provisioning, his ability to choose, lead and manage crews, and his complete and utter appreciation and respect for boat owners and sponsors for what they invest by way of time and money in their sailing. He sees the broader picture, the importance of the shore teams that perform vital PR functions, that source the finance and sponsors, what he calls the ‘wider rings’ that surround and support the ocean-going crew. These insights allowed him to easily interface with Team Brunel sponsor Robeco and its VIP members during several Volvo Ocean Race stopovers, sharing his considerable knowledge to keep them informed and updated. ‘Teams survive because the boats are out there sailing,’ Mike says. ‘When the boats are sailing, the sponsors get the returns they can then put back into sailing.’ 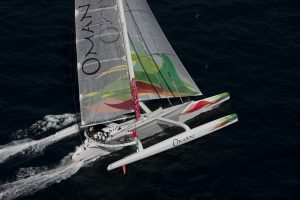 Mike’s career has been peppered with those moments when he has been called up out of the blue to join a crew or project. Moments when you just say ‘yes’. One such call came from Paul Standbridge, ‘a wonderful guy to sail with’, who is involved with Oman Sails. The project: sailing the 105ft trimaran Majan for the Indian Ocean 5 Capes Race. Starting in Oman, the crew sailed to the Maldives, and on to Perth, where Marc Lagesse replaced Mike for the finishing legs to Hong Kong and back to Oman. ‘The Sultan of Oman felt the country had lost its sailing heritage and had started a programme to re-establish the sport. We were one small aspect of that, mentoring the Omanians onboard, getting them up to a good level of sailing.’

A Call to the Classics

Another was a call from Matt Brooks asking him to join the crew of the 53ft classic yacht Dorade as sailing master for the 2015 Trans-Atlantic Race. Dorade was designed by Olin Stephens of Sparkman & Stephens in 1929 and built by the following year. She enjoyed a steady stream of wins in the 1930s including the 1930 Trans-Atlantic Race. Matt and his wife Pam Rorke Levy, who bought her in 2010 and had her restored to her original racing form (with the addition of modern safety and navigational equipment), hoped to repeat her success in 2015. She finished second in the IRC Class 4 and Classic division. ‘Matt and Pam are not boat owners; they are custodians of history,’ Mike explains. And they take her story wherever they go. 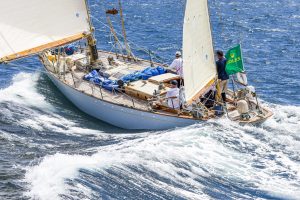 More recently, there was a call from Erle William a seasoned New Zealand sailor to join the J Class Ranger. ‘The Ranger campaign has always been filled with sailors whose lengthy résumés are very impressive. It was a great privilege to sail with the team in the J Class World Championships in Newport, RI. Sadly the owner John Williams passed away in 2018,’ Mike says. 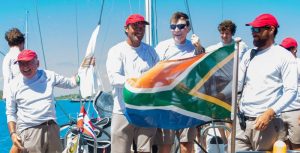 2015 produced a great year of sailing for Mike, especially with James Blakemore and his all-South African crew of the Swan 53 Music. After making some technical adjustments which improved the boat’s handicap, she had a clean sweep of firsts in the Spinnaker 3 Division to win the class in the Les Voiles de Saint-Barth and enjoyed a win in the Rolex Swan Cup Caribbean. Music has been enjoying a winning streak for a number of years, because James has surrounded himself with the right people, Mike notes. It really is a case of when a plan comes together – the right project, the right people, the right leadership produce richly rewarding results in sailing.

Supporting Irvine Laidlaw’s Cape 31 one-design project was another highlight for Mike, and part of a shared vision for putting Cape Town and SA on the calendar in terms of international sailing. ‘The Cape 31 represents a fast, physical sailing experience, perfect for young sportsmen who want to get out there and enjoy two or three races in a day, and feel exhausted afterwards,’ he explains. ‘At design stage, we took out the bits and pieces that make sailing technical, so we went back to the basics, and those elements that make sailing fun and accessible, like Hobie sailing,’ Mike adds.  Cape Town is one of the nicest places to visit and sail. International sailing ends in the Med with the Rolex Middle Sea Race in October, and starts again in the Caribbean in February. Unless owners want to head to Australia for the Rolex Sydney to Hobart Race, there is a gap in the calendar. ‘This was the thinking behind organising invitational regattas, where everyone who loves sailing can participate, not just professionals. ‘It’s part and parcel of growing the sport in SA,’ says Mike. ‘Part of a bigger picture.’ 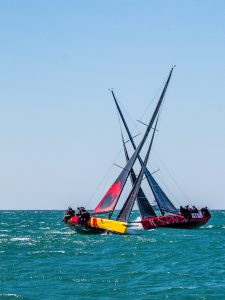 Michael Giles had a hand in the development and marketing of the Cape 31.

Mike plans to continue to mix things up over the course of the next two years, and looks forward to the 2020 Cape2Rio campaign among others. ‘We need to continue doing projects that not only expose South Africa internationally, but grow sailing at local and club level. The talent is there, we just need a platform to showcase it – whether it be the Olympics, the Volvo Ocean Race, the America’s Cup. With the right guidance, South Africa can shine,’ he says.

SA’s best to compete in the Lipton Challenge Cup