Long-distance swimmer Ben Lecomte is trying to raise awareness around the overuse of plastics by swimming through the worlds most polluted stretch of water known as the Great Pacific Garbage Patch. Lecomte set off from Hawaii on World Oceans Day, 8 June, to swim the 555 kilometer stretch to California.

The patch, also known as the Pacific Trash Vortex, is a section of ocean that lies roughly halfway between Hawaii and California. About 1.6 million square kilometers in size, it is estimated that the plastic waste weighs 87 000 tonnes and contains more than 1.8 trillion pieces of plastic. Its full size is larger than the whole of South Africa. Single use plastic is the most obvious culprit contributing to this mass, but a major offender is not one at the forefront of our mind: our clothing.

Over 35% of the projected 1.5 million metric tonnes of microplastic in the ocean comes from synthetic textiles. The most concerning part of this is that the microfibres coming off of clothing cannot be seen by the naked eye, thus is ingested by marine life, therefore eventually us. A single load of washing can release 700 000 synthetic microfibres into our waterways, which is why Lecomte chose to partner with the New Zealand brand Icebreaker, a sustainable clothing company focused on ethical and natural business practices. “People need to understand that the problem is there because of our habits on land. The solution is in our hands, but we need to change how we use plastic,” said Lecomte. 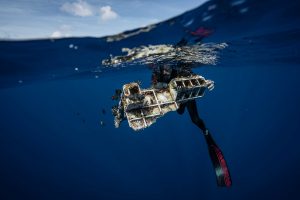 Ben with a crate found during his swim. Credits: @thevortexswim

“I’ve been doing open water swimming for a long time – and I’ve seen a big difference in those 30 years in plastics and microfibres that you find in the ocean,” Lecomte said. Alongside him for the journey will be a support team including researchers who will sample the area over the three months. The crew will live on a 67 ft steel-hulled yacht for the duration of the trip while Lecomte swims up to eight hours a day. Taking water and plastic samples every 30-50 nautical miles, the crew will be the first to provide an extensive, unified high-definition sampling of the plastic pollution across the Pacific ocean.

On a previous journey called “The Swim”, which took them nearly six months to complete, the team also collected samples to which this set will add. Struck by the amount of debris and microplastics found during the trip, Lecomte and his crew were inspired to do more for the cause. “We’ve been complacent for so many years – this is important, we can change something,” he said. “We don’t have to wait for a miracle to happen and for technology to evolve and enable us to take all the plastic out of the ocean, because that won’t happen.” 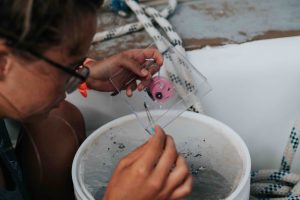 Along with the samples, the research team will also place trackers on large pieces of debris to follow their movements in ocean currents and observe how marine life interacts with the plastic. They will also be filtering water for microplastics and microfibres.

Follow the team by their logbook, and on Instagram (@thevortexswim) for daily updates. For more information on Ben and Icebreaker’s efforts, head over to movetonatural.com. 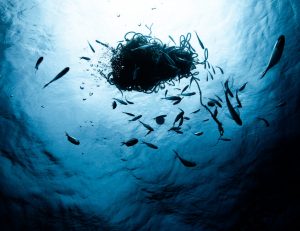 A ghost fishing net trailed by a group of pelagic fish. Credits: @thevortexswim

With this new month brings a new challenge (and don’t we all love a challenge). It’s Plastic Free July, so we at Sail + Leisure will be refusing products using single-use plastics as well as continue our efforts to recycle any discarded plastics. We invite you to join us and do the same. “It’s true when people say, we don’t need one person to do it perfectly, we need millions to do it imperfectly.”

SA’s best to compete in the Lipton Challenge Cup