South African sailor, Mark Sadler was in Cape Town recently to compete in the Cape 31 Invitational Regatta with Team Orion from Hong Kong sailing, and Sail + Leisure caught up with him. He revealed why he’s been hooked on sailing for 36 years and how he manages his career with one foot on the ground and the other on a boat.

Midmar dam in Kwazulu-Natal is a pretty special place for professional SA sailor Mark Sadler (43). Located near his grandparents’ Howick home, it became a favourite family holiday destination and a secondary training ground to Murray Park Yacht Club, their home club near Benoni. He remembers being caught in a buster hiding under the (capsized) boat on Midmar a long time ago. ‘I probably was scared by it, but I used to quite like capsizing when I was younger because it was fun, and I got quite used to that,’ he says.

Sadler started sailing Gypsy dinghies with his dad when he was about seven years old, and was given his first Optimist soon afterwards. He completed his first junior nationals at Midmar in 1984 and at the end of 2017 he relived that experience when his two eldest kids competed in the same event at the same venue. ‘That was pretty cool. They’re quite young, but Nicola’s doing pretty well in Oppies now,’ he says. Sadler says he was ‘pretty obsessed’ with his Optimist as a young sailor but ‘wasn’t that good’.

Once Sadler started sailing in the Dabchick class, things changed. Dabbies suited him and he won two nationals in 1992 and 1993 at Saldanha Bay and Midmar. ‘The Dabbie class was more relaxed, I was a bit bigger, and I had a lot of fun on those boats. They got me interested in trying to get better each time I went sailing. It all fell into place,’ says Sadler. Sadler went on to compete in two world youth championships in a 420 dinghy (‘we didn’t do very well; SA had just been allowed back into the international sports arena’), and then began sailing Lasers and Fireballs. By the time he made the team for the Laser World Championships in 1996, he had left school and was working at Hyde Sails in Joburg. That event, held in Cape Town, made him realise that he needed to be at the coast if he wanted to take his sailing career more seriously. North Sails Cape Town got wind of that intention and offered Sadler a job building dinghy sails. He moved to the Mother City the following year, where he was introduced to the world of small keelboat racing.

Sadler sailed with Alex Simonis and Phil Harvey on the Mount Gay 30, which did very well from 1996 to 1999. He then met Robertson and Caine director Ellian Perch, who had an ILC 40 called Orion Express that had just come off the race circuit. ‘He wanted to give some young guys a chance, so he formed a team, and handed the boat over to me to steer,’ he says. The team sailed in local regattas here, and raced the L26 Orion Challenger and Dalys Insurance (with Sadler steering) to victory in the Lipton Challenge Cup in 2000 and 2003 respectively.

Getting involved in the Shosholoza America’s Cup campaign from 2004 to 2007 was a game changer, and effectively launched Sadler’s international sailing career. He started as a downwind trimmer, moved up to strategist and then skipper. ‘That was a good step in the sailing world. We entered a lot of regattas in parallel, competing in the former Swedish Match Tour from 2004 to 2006 to build experience before the Cup.’ 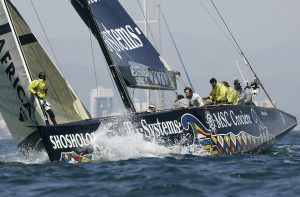 Shozoloza was a game changer for many South African sailors, launching them onto the world stage of yachting. Mark Sadler, Shaun Pammenter and Chris Nankin to name a few.

Back to reality in Cape Town, and still on the North Sails payroll, he moved from building to selling sails. On the water he worked with owner Eddie de Villiers on his Welbourne 46 Hi Fidelity as well as Nicholas Mace on his racing yacht, Gumption, for about three years sailing locally most of the time. Sadler fitted in a Cape2Rio before heading to France to participate in a superyacht regatta in 2009, and also joined Perch in China to win the China Cup International Regatta in the Beneteau First 40.7 class in 2009 and 2010. One of the owners of North Sails Palma was on board the same superyacht at the French regatta and Sadler’s mention that he was keen to extend his horizons led to a job offer a year later.

Sadler and wife Robyn (née Keen), who competed under Protea sailing colours in her Laser Radial at the ISAF Youth Sailing World Championship in 1996, have three children: Nicola, 10, Sean, 8, and two-and-a-half year old Gareth so life is ‘pretty busy’. While Sadler is hoping that Robyn will sail more often (she only manages one regatta a year currently), he knows that without her understanding of the sport ‘this would never happen’. He’s referring to his ability to pursue opportunities to progress his sailing career, which now has him and the family based in Spain while he juggles a sales position at North Sails Palma with working as a tactician on superyachts. ‘The whole family has to buy in to what I’m doing, why I’m going away and what I’m trying to achieve by doing that,’ he says. “Palma is a lovely place to live, we have a nice house there, the kids have got in to sailing, and they’re doing very well.’ 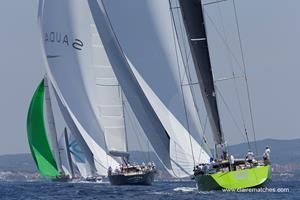 Sadler has done extensive superyacht sailing as well as international inshore and offshore racing ever since. He won the 2012 Rolex Middle Sea Race with De Villiers on the SA-flagged Hi Fidelity. Over the past few years he has also won the St Barths Bucket Regatta, Palma Superyacht Cup and Maxi Yacht Rolex Cup on the performance superyacht WinWin and sailed with Irvine Laidlaw on Highland Fling. He sailed on the Soto 40 Black Pearl for the 2013 season, moving onto the Carkeek 47 Black Pearl for many offshore events that included taking top honours in the Cape2Rio as well as the IRC 1 in the Annapolis to Newport Race in 2017. He has been an integral part of many other projects along the way. Ever humble, when pressed, Sadler says winning the Eikos J22 World Championships, the Cape2Rio, the Rolex Middle Sea Race, the Annapolis to Newport Race, the Palma Superyacht Cup and the Maxi Yacht Rolex Cup as well as competing in the America’s Cup rank among his greatest career successes. 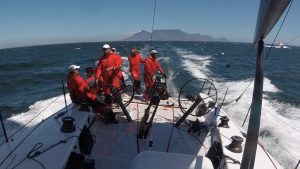 Mark Sadler and the crew on Black Pearl leave Table Mountain behind at the start of the 2017 Cape 2 Rio race. Black Pearl went on to win the race overall.

His latest connection to South Africans in international sailing was working as tactician on Tina Plattner’s TP52 Phoenix in the lead up to the campaign in the 52 Super Series in 2018.

Sadler is generally away from home sailing for 10-15 days a month. ‘I find with these regattas, there’s a very high expectation of performance. I have to be very focused on getting the job done and doing the best I can. There’s no time for relaxing and having a good time. I do that when I get home.’

With Sadler spending so much time offshore, you would think that ocean sailing would be his preference but he says he enjoys sailing inland as well. ‘Inland has the appeal of the chess game –searching out the puffs of wind and the wind bends around the land. Patience, he explains, is something that develops with experience. ‘Quite often a rushed decision is where things go wrong. Get the information you need, wait until you’re sure of the call, then make it – whether it’s what sail you’re going to use or which side of the course you’re going to sail on,’ he says.

Many of the helmsmen are the owners of the yachts so his role as tactician is to help coach. ‘Sometimes you have to let them make their own mistakes so they can learn. The aim is to coach them in a relaxed way, making them feel comfortable about what we’re trying to achieve, keeping the boat in safe positions around the course but also trying to win the race by making the right decisions.” What still drives his passion for the sport after so many years? ‘The feeling of success,’ says Sadler. ‘The goal is to win. I like winning. Although sometimes winning is not necessarily coming first. It’s achieving what you set out to achieve as a team. You’re only as good as the worst guy on the boat, so you’ve got to build a team to get the best out of them and then work to get the best out of the boat.’

As for staying fit, Sadler advises sailing, sailing and more sailing. As a tactician, his game is placing a yacht in the right place on the race course to get the best out of the prevailing conditions. This is less physically demanding than that of a bowman, whose job may require him to spend hours in the gym, he explains. ‘What’s so good about sailing, is that you’ve never got it all. There’s always something to learn to progress up the ladder, to make improvements. It can be quite rewarding that way.’