It’s that time of the year to be in awe of the incredible heights, jumps and spectacular freeriding by kiteboarders pushing the limits in ever-crazier conditions at the Red Bull King of the Air competition. Sail + Leisure caught up with world-renowned Dutch kiteboarder Ruben Lenten at the 2018 event. 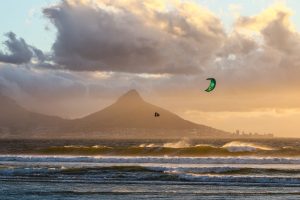 For kiting legend Ruben Lenten, the gustier and more gale-force the conditions, the better. It’s this quest for wild winds that takes him all over the world – far from the shores of Noordwijk near Amsterdam where he grew up. ‘When I was 10 years old my friends and I started playing with power kites on the beach, which was fun and addictive. Two years later we looked up the beach and saw this massive inflatable kite out on the water. We ran closer and I immediately knew what I wanted to do,’ he laughs. Since those seminal moments in the ’90s, Lenten has continued to push himself and his limits. In his 17 years of immersing himself in his sport (joining the Kiteboarding Freestyle Tour at just 16), Lenten has not only grown an enormous fan base around the world, he’s also gained huge respect for his mettle in facing conditions and extremes that few sane people would consider. ‘I haven’t really found a wind I couldn’t ride. I’ve had 74 knots before,’ he says. ‘At the moment I’m aiming to break the 30 metre jump barrier so I’m excited about that.’ Of course there are so many disciplines within kiteboarding, from setting speed records to freestyle riding and even snow kiting, but it was an unfortunate injury in 2006 that forced Lenten’s hand into the freeriding arena.

‘Just two weeks before the 2006 season kicked off I injured my ankle, which made me shift my focus from riding contests to freeriding, pushing my own limits outside the contest field and specialising in big airs and really strong winds. This is what people know me for and what I love doing most. Going huge!’ he grins. ‘After the megaloop, I started working on more variations with flips, spins and grabs. It’s pretty endless, and every jump feels as unique as the wind and waves; I never get bored,’ he says. ‘Pushing my limits would mean me nailing an S-loop – a megaloop where halfway through, you steer the kite back down and then twist the other way, creating a scary moment of freefall.’ Living a life in search of monster winds means Lenten is on the road for nine months of the year and Cape Town is one of his most important and favourite destinations not least because of the Red Bull King of the Air held annually in the southeaster filled summer months. ‘The Red Bull King of the Air is always that one event the whole kiteboarding scene looks forward to in the year, as the competition really showcases the extreme big-air side of the sport. Seeing someone fly high across the sky hucking some epic moves is breathtaking. ‘2017/18 was my 12th season in Cape Town. I just love it here, especially at Misty Cliffs near Kommetjie where the wind and waves get really big and strong – that place makes me feel alive,’ he says.

Despite his seemingly insatiable appetite for finding bigger, higher, faster winds (‘riding a blizzard in Iceland was pretty hectic’) and a dedication to improving equipment and technology in the sport together with wetsuit and harness manufacturers and designers Mystic as well as Dutch board developers Lieuwe Boards, Lenten’s biggest battle to date came late in 2015 when he was diagnosed with an aggressive form of cancer. After chemotherapy, it took Lenten six exhausting months to get back to fitness, but he remains philosophical that the experience has helped shape him as a sportsman and person. ‘Your biggest challenges make you grow the most so if something doesn’t go your way, look at the benefits and focus on what you have and what you can do,’ he says. Perhaps it’s the fact that he has already faced the scariest ride of his life that continues to push him or maybe it’s because Lenten has an enviable can-do attitude to everything he sets his mind to – either way his peers and plenty of would-be kitesurfers around the globe have him up on a wind-borne pedestal – and rightfully so.