Transat Classique | Time on The Side

Crossing the line in front of Christophe Harbour on Saturday January 26 at 3h30’31” (07h30’31” UTC), the 50-metre three-masted schooner Xarifa won line honours at the Panerai Transat Classique 2019, ahead of Stiren, Coch Y Bondhu and Hilaria.

XARIFA CROSSES THE LINE FIRST IN THE PANERAI TRANSAT CLASSIQUE 2019

On Sunday morning at 08h43’49’’ (13h43’49’’ UTC+1), Panerai yacht ambassador Eilean, a superb ketch design by the Fife’s shipyard in 1936, crossed the finish line and won fifth place on real time. Under the rising sun and 20 knots of wind, the last miles were sailed under mainsail with two reefs and a staysail. In the marina, Eilean and the other competitors received a warm welcome, with many hands offering help to pull on the mooring ropes, showing a sign of strong respect, conviviality and solidarity among sailors. In the afternoon, the race committee announced the finish of Lys, owned by Philippe Monnet and sailed with his highlander crew. 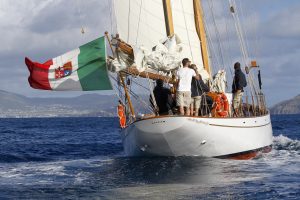 EILEAN CROSSES THE FINISH LINE IN FIFTH PLACE OF THE PANERAI TRANSAT CLASSIQUE. THIS BEAUTIFUL EXAMPLE OF CRAFTMANSHIP WILL BE ON SHOW IN THE CARIBBEAN.

Eilean will spend the next few weeks in the Caribbean where she will be available for visits by appointment to showcase the stunning work carried out by the shipwrights aboard this marvellous example of maritime craftsmanship, and to provide a unique glimpse into the Panerai universe.

To celebrate the most extreme classic race in the world, Panerai has created the Luminor Regatta Transat Classique (PAM00956), an exclusive special edition of 150 examples of the chronograph with a reverse countdown mechanism for indicating the moments preceding the start of a race with the greatest accuracy.

Other functions and features enhance this precision instrument, making it the perfect companion for life at sea: the classic Panerai device that protects the winding crown, which helps to ensure the watch’s water-resistance to 10 bar; the flyback chronograph with two counters, for measuring two partial times in quick succession; the tachymeter scale in knots on the flange, for calculating the speed of the boat; the power reserve of three days, ideal for covering the requirements of a long weekend at sea; and the device for zeroing the seconds hand to achieve perfect synchronisation. This powerful concentration of design and technology, available exclusively in Panerai boutiques throughout the world, is the result of Panerai’s exceptional expertise in high-quality sports watchmaking.

Originally founded in Florence in 1860 as a workshop, shop and school of watchmaking, Panerai supplied the Italian Navy, particularly its specialist diving corps, with precision instruments. The designs developed by Panerai at that time, including the Luminor and Radiomir, were covered by the Military Secrets Act for many years, and were launched on the international market only after the brand was acquired by the Richemont Group in 1997. Today Panerai develops and crafts its movements and watches at its Neuchâtel manufacture. The timepieces are a seamless combination of Italian design flair and history with Swiss horological expertise. Panerai watches are sold across the world through an exclusive network of distributors and Panerai boutiques.