The Cape 31 is a South African-produced speedster – developed for a fast, one-design racing circuit in strong winds, utilising a small crew. The C31 is the brainchild of Irvine Laidlaw, who wanted to develop a boat that would be built and assembled in Cape Town to support the local boat building industry. Designed by Mark Mills, this boat has taken the one-design 30 footer class by storm, leading to sales in the UK, United States and Australia.

The Cape 31 Class association was established to manage the class rules, build the class, and to run regattas. The ever popular C31 Invitational made the boats available to overseas sailors to race in Table Bay in the infamous South Easter. This led to sales in overseas markets.

One-design racing at its best

With the Cape 31 being a fun, exciting class, the future of the fleet looks strong. Pro’s and amateurs alike sail in one of the best, if not the best, one design fleet in the country. The boats are so closely matched, which leads to some intense sailing. On any given race you can have up to five lead changes from the first beat, with the boats at the back and the front swapping all the time. 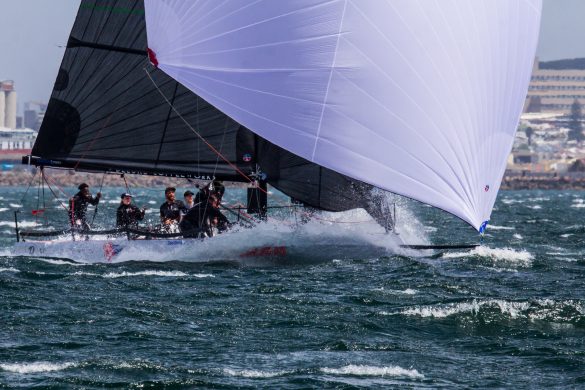 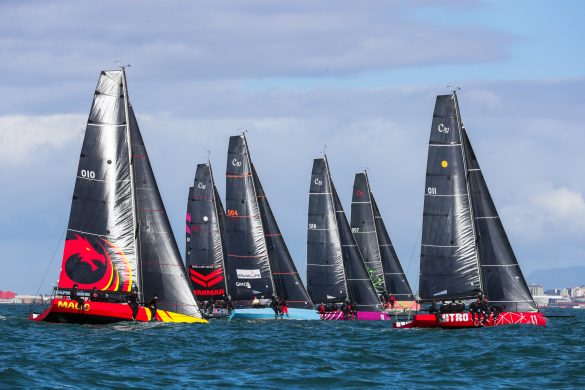 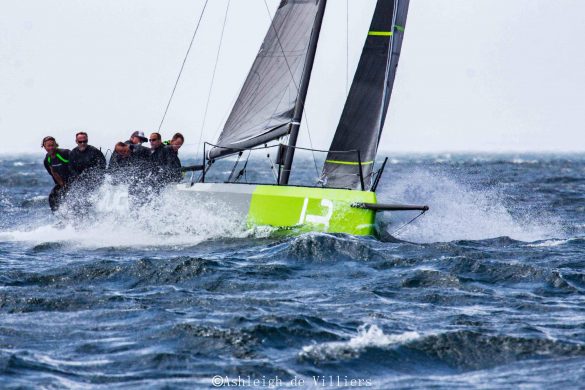 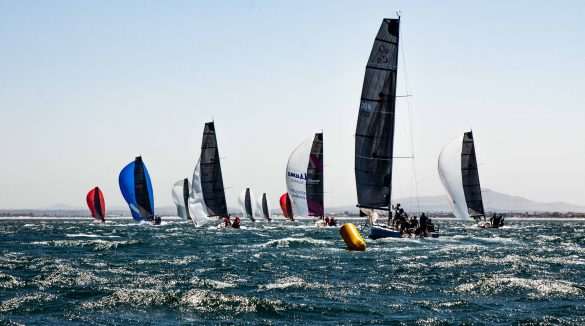 Heading to the bottom mark in the Cape 31 Invitational 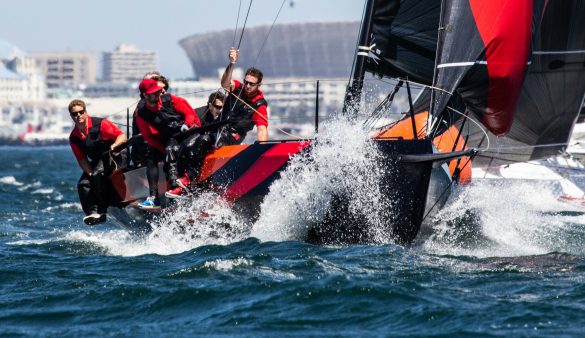 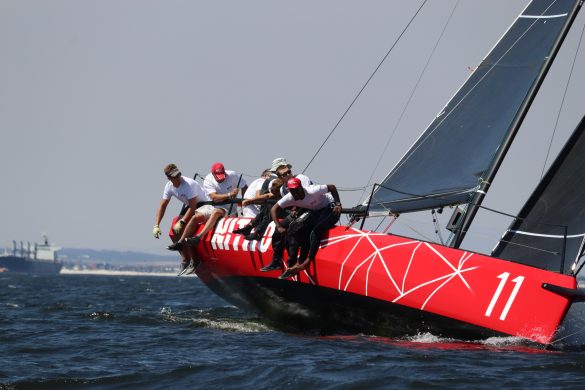 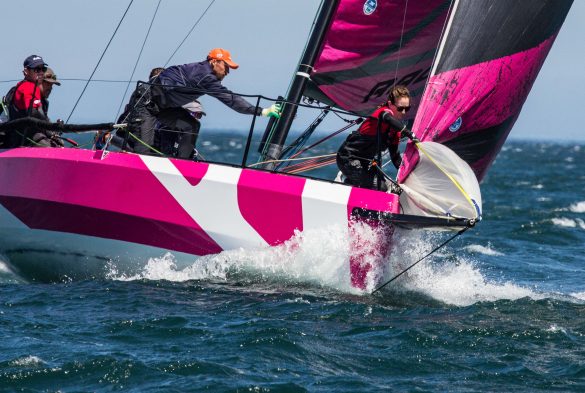 What makes this class successful is the excellent quality of the build established by the late Uwe Jaspersen and his team at CarboTech. With the untimely death of Uwe, the build has now gone to experienced boat builder Stephen du Toit of Cape Performance Sailing. Another aspect of success was down to the specification of hardware and the sail inventories. Two sail manufacturers, North Sails and Ullman Sails were selected to provide the sail inventory according to the specifications set out by Mark Mills.

Initially most boats elected to go with North Sails, but more recently a few boats have chosen to go with Ullman Sails.

The next generation of Cape 31 sails

The Ullman Sails/Cape 31 collaboration started around two years ago with Ullman Sails’ Tyran Kerford sailing the 2019 Lipton Challenge Cup onboard the Cape 31, SKI. The first set of Cape 31 sails from Ullman were developed on SKI, however we knew right from the beginning that we had some catching up to do, and quickly, if we hoped to compete with the majority of the fleet.

Ullman Sails began as a one-design racing loft in Newport Beach, California in 1967 when David Ullman started building Lido 14 sails that won him the U.S National Sailing Championships in 1969. So the development of one design sails is something that the group takes very seriously.

After the 2019 Lipton Challenge Cup, Gerry Hegie, co-skipper of Seascape powered by Yanmar Racing, approached Ullman Sails with a proposal to switch his inventory, and so began an intense development programme where we set about looking to design and build the fastest Cape 31 sails we could.

To do this we involved all elements of our worldwide design team, led by our head of international design, Bruce Hollis in Sydney. Bruce Hollis has nearly 40 years of experience in sail making, racing, sail design, and boat building. His resume includes work on the America’s Cup, development 18-Footer campaigns, a winning Sydney Hobart campaign, and many successful IRC/ORC race programs. Bruce has also worked on a variety of other Mark Mills’ designs and understands the intricacies of what goes into designing racing sails for fast, planing boats.

By using the superb feedback from Gerry and his team, the Ullman’s Sails South Africa team and Bruce Hollis in Australia refined the shape, luff curves and hardware to develop a set of sails that proved to be super-fast out on the water. 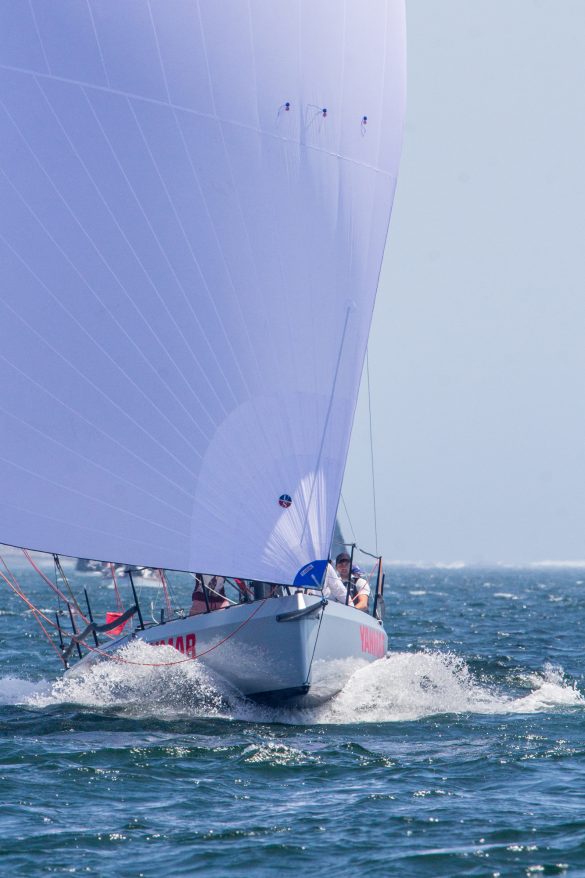 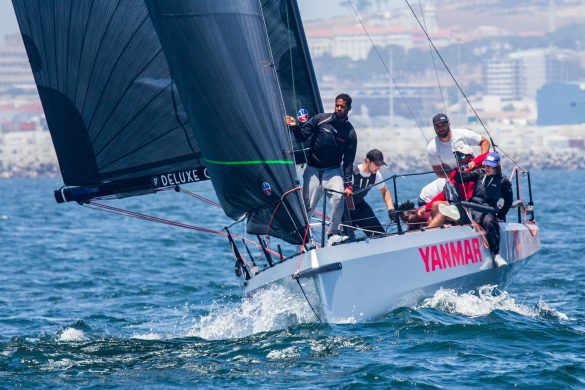 The Ullman Sails downwind spinnakers are still in development, with three sails currently sailing in the fleet. These sails have been developed using cloth which has proved very fast in light conditions with good projection in certain parts of the sail to increase the boat speed.

All sails have been developed within the strict Cape 31 rules, which have limited the use of three dimensional sails and sails produced within narrow measurement bands to ensure that all competitors sail on an equal footing.

Ullman Sails prides itself on an ‘always developing’ attitude. While we have now developed a class-winning set of sails that stick within the strict standards of the Cape 31 rules, we like to work with our customers to develop sails that work for their way of sailing. With the sails getting a fair amount of abuse on the water, it is recommended that to stay up at the top of the fleet, sails should be replaced every season or second season.