We’ve no sooner recovered from the excitement of the America’s Cup, and now we have more grand prix racing to look forward to. SailGP Season 2 kicks off on 25th April with an expanded calendar, which crosses the globe.

Where it all begins

The opening events are set for the island of Bermuda and the southern Italian city of Taranto. From there the league will stay in Europe with events in Great Britain in mid-July, Denmark in August and France in September with the final event of the European leg set for Cádiz in Andalusia, Spain, in October.

SailGP will also make its first visit to Christchurch for New Zealand’s maiden Grand Prix on January 29-30, 2022. The season will culminate with the Grand Final in San Francisco on March 26 and27, 2022, where the champion will be determined in a single $1 million winner-takes-all final. 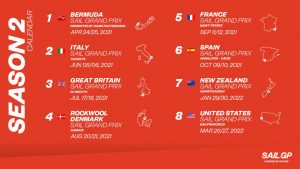 A top SailGP line up

Denmark and Spain will be embarking on their first full SailGP seasons after the 2020 campaign was suspended, while New Zealand will be making its league debut led by America’s Cup and Olympic champions Peter Burling and Blair Tuke. In addition, Sir Ben Ainslie will be racing his first full season at the helm of the British entry, while Jimmy Spithill will be piloting a new-look U.S. team for the first time.

Initially scheduled for 2020, SailGP Season 2 events were postponed due the COVID-19 pandemic. The results of the first event in Sydney in 2020, which was held before the season’s suspension and won by four-time Olympic gold medalist Sir Ben Ainslie’s Great Britain SailGP Team, are null and void.

The eSailGP Championship event is back bigger and better

With less than three weeks before the eight international teams meet on the water in Bermuda for the league’s return to racing, SailGP has launched the 2021 eSailGP Championship.

Building on the success of the inaugural season, which saw more than 146,000 unique players take part across 55,783 individual races, fans will have a chance to test their skills piloting one of the most innovative race boats in the world in a virtual environment on new courses and with new look boats. The Championship winner will be rewarded with an all-inclusive package to a SailGP event in 2022 and a place in the 2021 eSailing World Championship Final.

The road to SailGP victory

In partnership with Virtual Regatta and World Sailing, the championship will feature six qualification events over the course of the first half of the season, with a spot in the eSailGP Grand Final on October 15 up for grabs for the winners. The eSailGP Grand Final will see the two gamers with the highest points after three fleet races face-off in a single winner-takes-all match race

Two wildcard berths will also be available at the final for a female player and a youth player, who will be selected by a panel of judges. This initiative is in line with SailGP’s immediate focus on the advancement of gender equity and its program to fast-track the training and development of female athletes for participation. 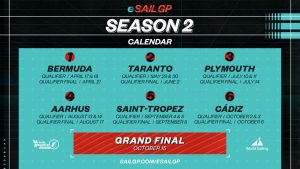 eSailGP Season 1 amassed 753,000 views on SailGP’s social platforms and the league has been working to further bring the live shows to life for players and followers, including enhanced graphics, explainer videos and a reinforced expert commentary team. Shay Thompson will return for her first full season as host and she is no stranger to the world of gaming. She is currently the host of McClaren’s Shadowcast, she streams for Xbox Interactive, presents panels and podcasts for the British Academy of Film and Television Arts, and she is the founder of Level Up Link Up, an event aimed to make the games industry a more diverse place.

She’ll be joined by Olympic champion and Japan SailGP Team helm Nathan Outteridge, who will transfer his expertise from the racecourse to the eSailGP commentary team for the first time, alongside his teammate and flight controller Leo Takahashi.

Ahead of the pack

British eSailor Mike O’Donovan won the inaugural season after seven months of hard-fought virtual battles. To launch the 2021 eSailGP Championship, he joined some of the games top players including French player Pepito from the MCES esport team and Andrea Emone who was a participant in the Spain SailGP Team women’s invitational camp earlier this year, for the ultimate invitational event.

eSailGP races are 5-6 minutes long and feature up to 10 players per game. The championship is integrated into the Virtual Regatta Inshore platform, the largest sailing community in the world with more than 1.6 million players.

Training opens for each eSailGP qualification event a few days before the real-life racing kicks off, and the courses mimic the iconic venues where the global championship is hosting races at the respective time. The first event of the season kicks off with the Bermuda eSailGP, April 17-18.

eSailGP can be played on Desktop, iOS and Android.