South African-born Alon Finkelstein is senior designer for the America’s Cup Stars & Stripes Team USA – A far cry from his early dinghy sailing days in Gauteng. We caught up with Alon in Holland, Michigan, where the Team USA boat build was underway.

The Countdown for the America’s Cup 2021 is on, and teams across the globe are busy preparing for their single-design AC75 foiling monohulls to leave their yards and hit the water. These magnificent beasts will be a first for the America’s Cup since they will be identical in their design, honed by each team’s engineer and crew, and perfected by the endless tweaking that takes place to secure an optimal edge on the water and in the racing environment.

Johannesburg-born Alon Finkelstein is a senior engineer for stars and stripes Team USA and, undeniably, a key member of the team. Alon has lived in the US for the past 20 years and joined Team USA in December 2018 after 15 years with Farr Yacht Design, working on many of their Volvo Ocean Race campaign boats. But how does a boy from Johannesburg who grew up racing Oppies at the Pretoria Sailing Club get to become one of the best boat engineers and designers in the world?

‘I was first introduced to sailing when I was seven when my dad bought me my first Optimist. My initial instruction was courtesy of a great member of the club, Sjoerd Joustra, who gave very generously of his time to teach kids the basics of sailing. I really enjoyed it and started racing at club level on a regular basis. There were some other hotshot kids at Pretoria Sailing Club (PSC) whom I looked up to, so I started going to regattas and watching closely what they did,’ says Alon.

‘Almost every weekend, my parents would schlepp me either to PSC or regional, provisional or national regattas. Eventually I progressed through the ranks of the Optimist class, culminating in two third-place finishes at Nationals, qualifying to represent South Africa at three international events, and winning the 1992 European Optimist championship, which I still consider the greatest achievement in my sailing career.’ He adds, ‘ I enjoyed the level of competition, the opportunity to strive for higher positions and, most of all, the friendships I made. Some of my closest friends to this day, such as Roger and Dale Hudson, Mark and Robyn Sadler and Charles Nankin, are people I grew up competing against in the Optimist Class.’ 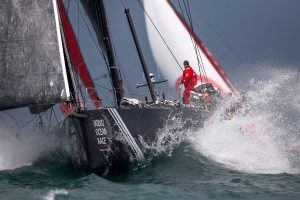 While sailing has been an integral part of Alon’s life from a young age, it became clear that he had the mindset and academic ability for a long-term plan to stay in the game too. After matriculating, Alon headed to Johannesburg’s Wits University where he began his study path towards marine engineering and yacht design.

But yacht design isn’t something that South African students are necessarily exposed to as undergrads and Alon settled for the next best thing, ‘I chose aeronautical engineering as my undergrad degree because this was the closest thing to marine engineering or yacht design available. Wits was an easy choice for me. The programme was well regarded and my mom worked at the University so my tuition was free! I was then accepted to the Naval Architecture and Marine Engineering programme at the University of Michigan. I was adequately educated in the key engineering disciplines and principles needed for marine engineering, such as fluids, structures and materials.’

With his eye on the prize ( a career in yacht design), Alon settled into life at Michigan University. ‘Naval architecture and marine engineering are pretty niche fields, even in the US, with most graduates going on to work for the Navy or military contractors. This was never an option for me, being an SA citizen, so I really wanted to find a position in yacht design after I graduated.’

‘I really started to follow the America’s Cup after moving to the States. The 1999 Cup match was fully televised, so my university friends and I would stay up late to watch. The 1999 Cup had some classic matches between One America and Prada in the Louis Vuitton finals, and then Prada and Team New Zealand in the Cup Match itself. This event really stoked my passion and interest. Shortly after I graduated, I was extremely fortunate to receive a job offer from the Oracle Racing America’s cup team. It was the culmination of a lot of hard work for me and a dream come true to be able to work in my chosen field, right after college.’ 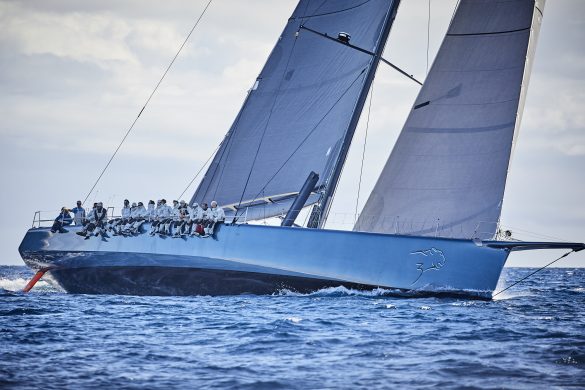 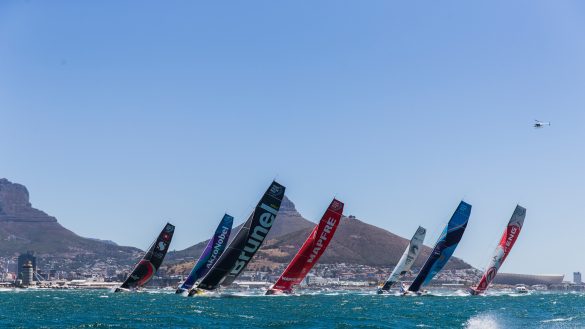 For the 36th America’s Cup presented by Prada in Auckland next January and February, defenders Emirates Team New Zealand as well as all the other participating boats will be AC75 class monohulls, featuring foils and soft-wing mainsails. The reasoning behind this new development, say the defenders, is to attract more teams to the event and to help reduce cost outputs. In principle, the one-design, 75ft, 11-member rig will create a uniformity in racing structure, and thanks to the shorter mast and soft sail rig, it is a much lighter design that its multihull sibling, the AC72, and subsequently requires less manpower.

‘The Class Rule as well at the type of yacht selected for the next America’s Cup are something pretty unique. They are conceptually similar to a foiling Moth dinghy, but capable of speeds and loads like the large catamarans used in the last few Cup cycles,’ explains Alon. With the design strictures in place, the boat build will be a different experience for Alon too. ‘My initial role within the team is actually quite different to other design roles I have played before. I have to gather all the design information from the defenders Emirates Team New Zealand, to communicate and collaborate all this information in a way that makes sense to our construction team at the build factory. It’s basically an on-site manufacturing engineering role at the construction facility. Once the boat construction is complete, I will then transition into a more traditional ‘designer’ role working to optimise the yacht and improve her performance in the build-up to the Cup.’ 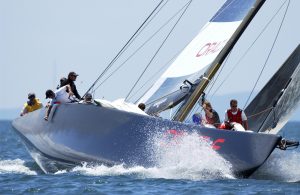 “Oracle BMW” (USA-76) during the Final, Race 5, Louis Vuitton Cup 2002/2003, Auckland, New Zealand. ^^^This was another wonderful match between “Alinghi” and “Oracle” with a very close finish, side by side. “Alinghi” won its fourth victory and came another step closer to the America’s Cup.

The aspect of working with some of the best designers, builders and yachtsmen in the world is certainly one that inspires and drives Alon as he makes his way from his Family’s home base in Chicago to Holland, Michigan, where Team USA currently has their hands full with their America’s Cup 2021 build. ‘I’m always amazed at the knowledge displayed by the senior boat builders on projects like this. Most of them have decades of prior experience under their belts so when faced with a tricky project ad a myriad different ways to build a certain component, they always have valuable input to share from their experience about what has and hasn’t worked well in the past.’

The Campaign has not been without its trials. ‘Our biggest challenge has been a late start. It’s also been challenging competing with the other more established teams that are able to access assets and skills’, says Alon. But the beauty of bringing in multiple engineering minds means that the combined focus on problem-solving is heightened. There’s no denying that the singular focus on the job at hand and the never-ending attempts to hone each and every element of the boat’s handling on the water make it an exhilarating experience. ‘Every department is always looking for ways, big and small, to improve their functional area. The sailors will figure out ways to move the boat to optimise the manoeuvres; the boatbuilders will continue to find ways to build lighter and stronger components; the shore crew will continue to maintain the equipment to avoid downtime and lost sailing opportunities; and, of course, designers will continue their research and development efforts in an attempt to get every last 10th of a knot of speed out of the platform,’ he says.

For the next America’s Cup, given the one-design component, it will no doubt be the tiniest tweaks that will make all the difference and for any engineer in the sailing world this really is the exciting part of the experience. ‘Obviously the foils are the eye-catching development that are the future of the sport and that most people will notice. However, the actuation systems used to control the foils are where a lot of develo

pment is happening at the moment. The team that can master the mechatronics will be able to maintain superior control of their yacht, which will result in the greatest speeds. It’s a really exciting time to be in the sailing world. The technology that used to belong exclusively on aircrafts or Formula 1 cars is now prevalent on racing yachts.’ With just two years to go, Alon and Team USA are full steam ahead with their endeavours.

Much has changed since the young South African student was glued to the television matches back in 1999, but the thrill of watching his own efforts executed on the water will do doubt be a career highlight and something to look back on with enormous pride. 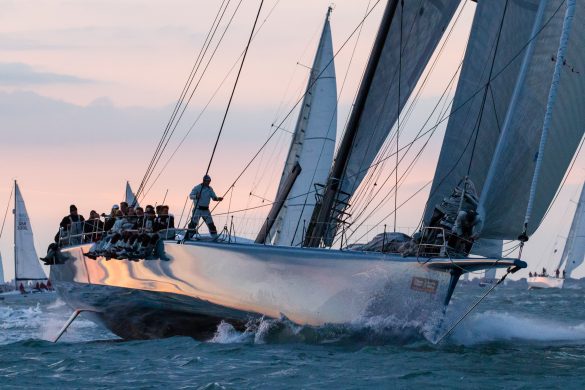 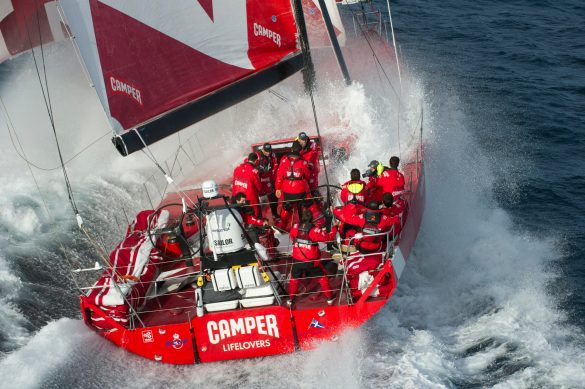 CAMPER with Emirates Team New Zealand. On the final leg of their 2000 mile qualifier approach Auckland. 15/05/11