The Rolex TP52 World Championship tested some of the world’s best sailors in an epic one-design regatta.

The Bay of Palma has a reputation for consistent, steady sea-breeze, but this weeks sailing kept teams on their toes as conditions worked to upset that notion. Shifting wind directions, sometimes up to 25 degrees, and pocketed winds throughout the week complicated some stretches of racing. However, whenever the breeze filled in teams were prepared and certainly put on a good show of talent and skill as they flew through the course.

It was an exciting and nail biting day as the event kicked off with a bang. South Africa was on the edge of their seats as Phoenix 12 and Phoenix 11 showed off the level of experience coming from our homeland. Quantum Racing took 1st place in race 1 and Sled claimed 1st place in race 2. Phoenix 12 pulled through with two marvellous 3rd placings resulted in them sitting at the top of the leader board.

It was a disaster day on the water for Provezza as their mast crumbled during the first race – at this point their race was purely to get a replacement mast flown in to Mallorca in time for the next day’s racing. 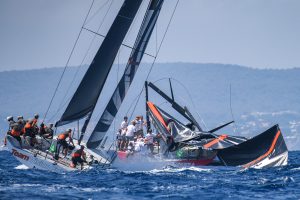 A challenging one out on the water, with the wind dropping off as the day progressed. Sled took 1st in race 3 bumping them to the top of the leader board. Race 4 was anyone’s game as teams bounced around the leader board with the shifting winds throwing some teams a few curve balls. Alegre held strong to finish 1st putting them at 3rd overall.

Some unfortunate penalties for our South African team Phoenix 12 in the first race set them back in the fleet but they fought hard to keep their placings. Unfortunately they lost their position at the top of the fleet. Results were extremely close with Alegre, Quantum Racing, Azzurra and Phoenix 12 tied for 3rd place but Phoenix 12′s results pushed them to 6th place. Phoenix 11 got stuck in the middle of the fleet scoring two 9th places today.

A series of thunderstorms and strong winds put a dampener on the day’s racing. Race Officer Maria Torrijo made the call to cancel racing for the day and said that she would aim to run three heats on Wednesday if the weather allowed. “We knew that today would be a difficult day to find a period of stable wind conditions. Tomorrow will be a long day because the weather will not be stable before lunch time,” she said.

Harm Müller-Spreer’s Platoon showed an incredible effort, winning the 2019 Rolex TP52 World Championship title, however they did not make it easy for themselves. The team, led by the Hamburg-based owner-driver, had to contend with two additional penalty points that they were given for twice making contact with rival boats as well as two penalties for different infringements during a tense, nervy showdown with Azzurra. 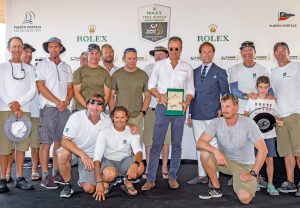 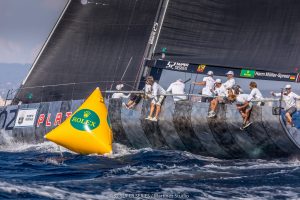 An epic display of skill and nerve was shown by both South African teams in the last day’s racing as they fought hard to climb up the leaderboard. Phoenix 11 coming in at 8th over all and Phoenix 12 only a few points ahead in 7th.

This year the Phoenix team ran two boats, both racing at Mahón and at the Rolex TP52 World Championship Puerto Portals. The teams trained hard through the early pre-season, including events in South Africa where they race smaller Cape 31 boats together, sharpening their skills further. This year Ado Stead was tactician on Phoenix 11 with Michele Ivaldi as strategist and Shane Elliot navigator, while Phoenix 12 had Cameron Dunn as tactician and Marc Lagesse as navigator. A shout out to all our South African reps in the international circuit – keep flying that flag high! Saffas on board include Paul Willcox, Tony Norris, Shane Elliot, Marc Lagesse, Mark Sadler, Matthew Whitehead, Tim Marsh, James Largier, Raymond van de Linde, and Siya Vato.

You can find full results here, and all highlights on the 52 Super Series Youtube channel. Up next is the AUDI SUPER SERIES in Puerto Cervo, Italy.

The Amazon Is Burning | What You Need To Know