The Amazon Is Burning | What You Need To Know

The legal fires ripping through the Amazon have received a lot of media attention recently, and most of the news tends to breed fake news alongside with it. So we decided to do some digging. Why are these fires burning? And why is it such a big deal?

Tens of thousands of fires are raging across the Amazon, destroying large swathes of forest in Brazil, Peru and Bolivia. This outbreak has caused nearly an 80% increase in fires in Brazil compared to last year. Brazilian president Jair Bolsonaro with his recent election brought a set of policies into power that weakened environmental protection in the region, cut an environmental protection budget by 95% and encouraged the clearing of land for agri-businesses. These fires are intentional for the purpose of clearing land, most likely to be used as pastures for cattle as Brazil is the world’s top beef exporter, according to the US Department of Agriculture.

The amount of virgin forest (regions which have not been exposed to logging and fire) burning is unknown at the moment, as these types of fires tend to keep close to the ground due to the damp environment. The most worrying fires are those in the dead regions which have been cut down and left to dry; dead organic matter is strong fuel and fires are hard to control.

“There is no doubt that this rise in fire activity is associated with a sharp rise in deforestation,” Paulo Artaxo, an atmospheric physicist at the University of São Paulo, told Science Magazine. 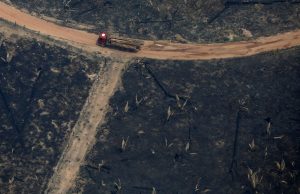 There have been a lot of diversion tactics on the Brazilian administration’s part, claiming heat and wind to be the cause, despite burning not being a natural phenomenon in tropical rainforests.

Why is it a big deal?

While most of the outrage associated with this news has been focused on the Amazon’s oxygen contribution to our atmosphere, one of its major services is actually the forest’s ability to store carbon. Stretches of forest like the Amazon are no doubt responsible for a large portion of our breathable air, but the dense diversity plays an even larger role in pulling planet-warming gases from the atmosphere, acting as an essential buffer. With excessive logging and burning, the forest is nearing a tipping point, after which it could act as a savanna. These regions have been storing carbon for decades, thus this process would release all of this back into the atmosphere.

Aside from the obvious effects on our environment, the land clearing is making changes in many people’s lives. The indigenous communities, such as the Tenharim people, will be hugely effected by the burnings. They have called the Amazon “Mother” for centuries, but fear for the future of their home with the rampant deforestation of this year. Marcio Tenharim, the president of the people’s association, speaks darkly of the future generation’s foreseen struggle. Their efforts to control the tangent fires tearing through unmonitored areas feel somewhat futile. At the centre of their world is a gathering of huts, modern pop music oddly blaring from its centre; this place is far away from the businessmen in Brazil’s bustling capitals, who are happy to invest in the forest.

Bolsonaro’s policies have been popular amongst industry and agricultural interests in Brazil, despite being condemned by environmentalists and opposition lawmakers. Hundreds of indigenous women stormed the capital in protest on 13 August, and the hashtag #PrayforAmazonia blew up on twitter. Not surprisingly, the situation has drawn international attention with French president Emmanuel Macron calling for action by pushing an emergency talk on the Amazon at the G7 Summit. On August 26th, the world’s seven largest economies offered Brazil more than $22 million in aid to help get the fires under control, which was immediately refused by the “insulted” president.

Donald Trump congratulated Bolsonaro for how he has handled the fires. The two presidents are currently working towards a free-trade agreement between Brazil and the U.S., specifically with Brazil pushing U.S. authorities to lift a 2017 ban on fresh Brazilian beef exports. The states are the highest consumers of beef internationally, and so this agreement could have huge effects on the wild spaces of Brazil, which hosts 60% of the Amazon rainforest. 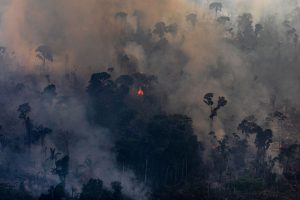 PORTO VELHO, RONDONIA, BRAZIL – AUGUST 25: In this aerial image, a fire burns in a section of the Amazon rain forest on August 25, 2019 in the Candeias do Jamari region near Porto Velho, Brazil.  (Photo by Victor Moriyama/Getty Images)

After weeks of international and internal pressure, the military were deployed to help fight the rampant and uncontrolled regions. Governmental and localised teams are working hard to keep the fires under control, but putting them out all together is a monumental and expensive task. The fires that were deliberately started are the hardest to control, as they are designed to be destructive.

On 29 August, Bolsonaro announced a 60-day ban on forest fires in response to the media’s heat. He has repeatedly insisted that the Amazon should be open to development and defunded the agencies working on ending illegal activity.  According to CNN, the best way to protest these fires is to stop supporting the industries that are fuelling them. One of the first major corporate responses to the fires was VFC – which owns brands including Timberland, Vans and The North Face – has stopped using all leather products coming from South America. Movements around the world are still hot with passion and voices, keeping this issue alive and under many governments’ eyes. South American countries will be meeting in Colombia to discuss how to respond to the burning Amazon.

How can we help?

It can be defeating reading about issues that feel so far away from us or out of our control. But small things compound to make a massive difference – sharing that article on Facebook is more important than you think! The list of ways to help below has been adapted from The Conversation.