Clarisse Cremer crossed the finish line of the Vendée Globe at 15:44:25 hrs UTC taking 12th place on Banque Populaire X. She is the first female skipper to cross the line in this 9th edition of the race, breaking Ellen Mc Arthur’s 21 year-old record.

With an elapsed time of 87 d 02 hrs 24 mins, Clarisse breaks Ellen MacArthur’s 21 year monohull solo, non-stop record for a female skipper. Ellen set a record of 94 days 4 hours when she took second in the 2000-2001 Vendée Globe.

But Cremer played down her ranking as the first female to finish, “For me, yes we know that being a woman in ocean racing becomes a differentiator on land. But this is a mixed race and a mixed sport and it’s about the breadth of ocean racing together. There is no female classification. At sea, I am a sailor and I don’t tell myself that the sailor in front is a man or a woman, I don’t think about that at all.”

She received a huge, warm welcome in Les Sables d’Olonne’s channel as thousands of well wishers turned out to see the return of the sailor who only sailed her IMOCA 15 months ago for the first time.

“I’m so happy to be here. It’s a big relief, we were stressed until the end. I’m happy to have succeeded and to be back with my team. This welcome is incredible, I feel like I am dreaming.” She grinned. 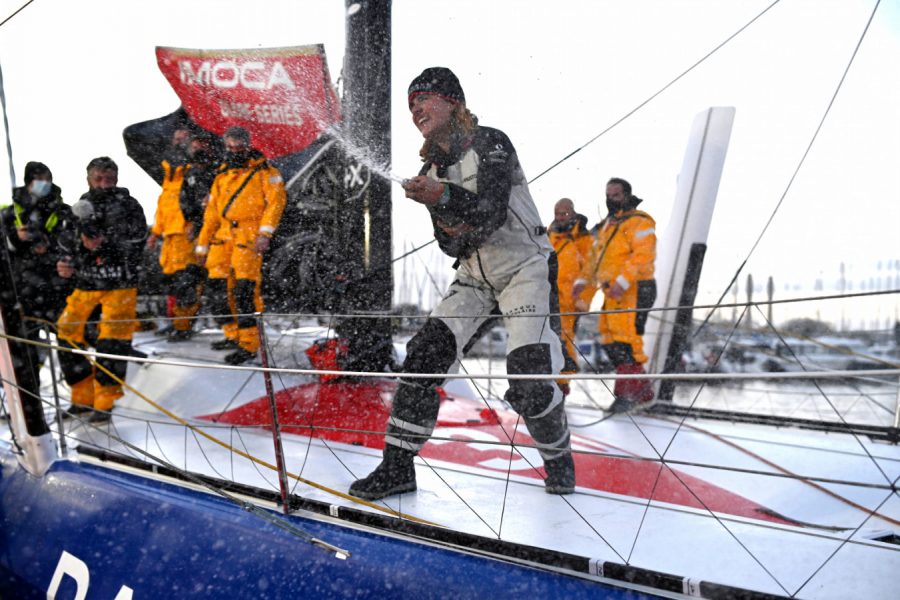 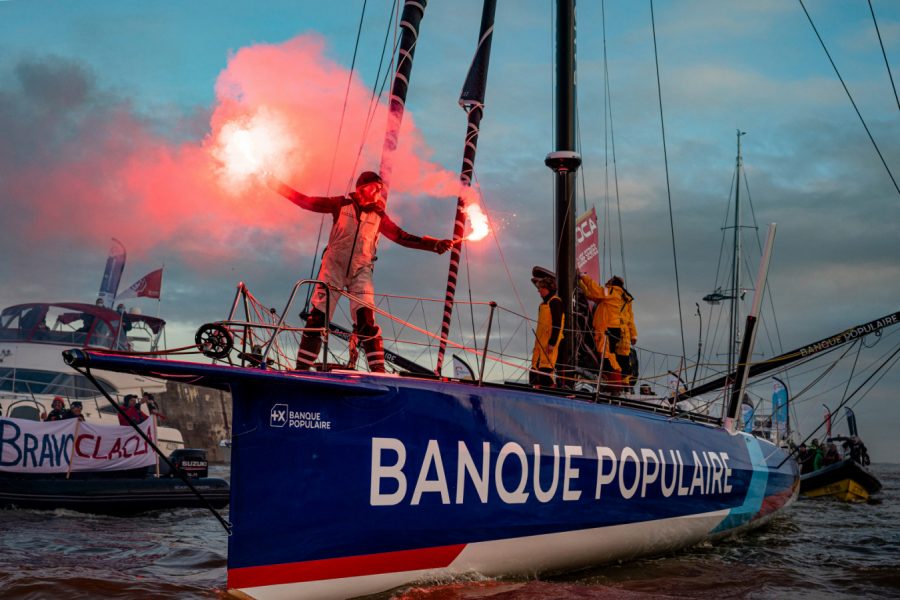 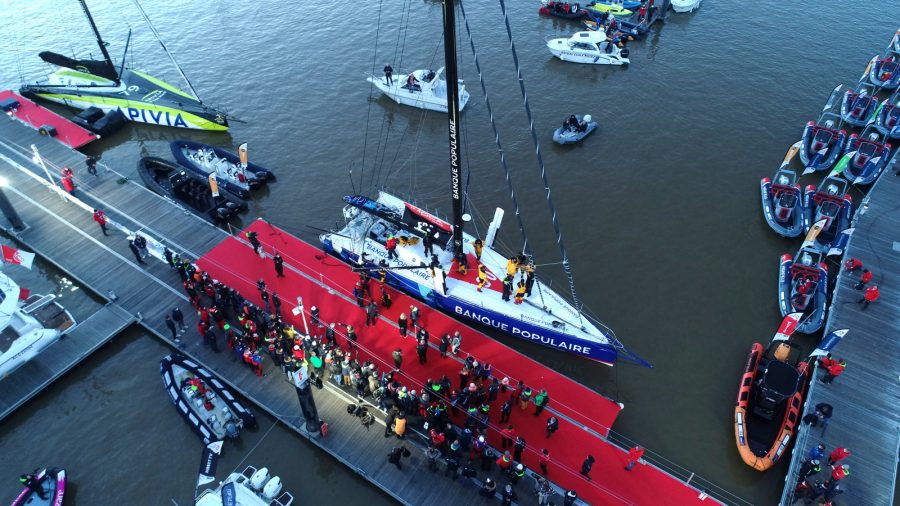 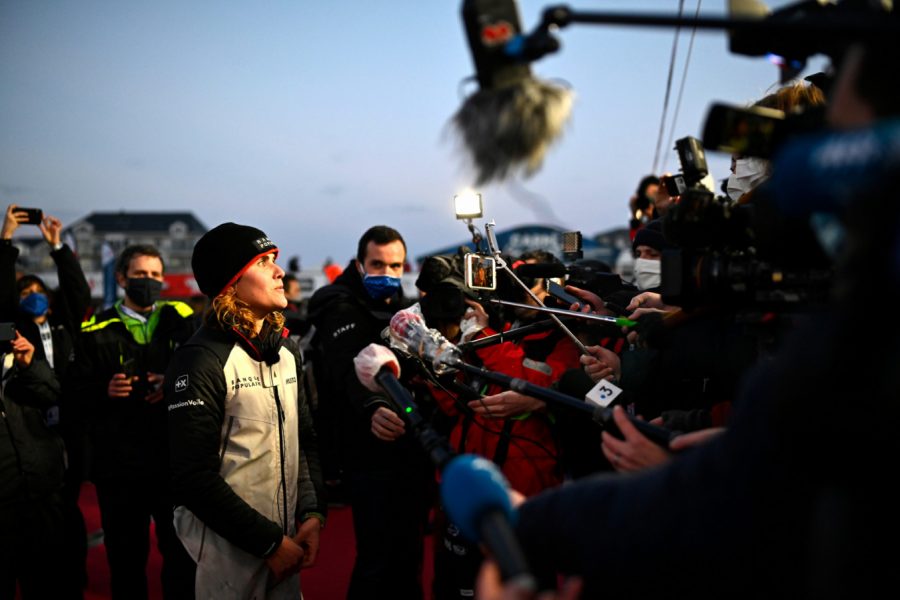 Learning the boat while racing

“ I really learned during this race, it almost makes you want to take the boat away, now that I’ve learned a lot about it, and go and do it again. I realise that at the start of the Vendée Globe I didn’t know how to use the boat so well and I discovered ‘the beast’ as the race went on. It’s nice to be more comfortable on your machine. The preparation time was a bit short, I felt it in the first week – I was a little intimidated about everything there was to do.”

She continued, “I think I had less problems in terms of technical issues. I’m lucky to have a great team and a very well prepared boat. It was my real priority from the start to be very careful with my boat. There were times when I wished I had pushed harder on the machine, but the goal was to finish. So I had a hard time, especially from the point of view of fatigue and the feeling of constantly having the sword of Damocles over my head, wondering when the next bad thing was going to happen. The moment I stopped thinking about it, it really got better and betterr. ”

From graduate to ocean racer

A relative latecomer to ocean racing 31 year old Cremer’s bubbly, charismatic personality and big smile masks a steely resolve and an appetite to learn and consume information that merits comparison with the English skipper. This Vendée Globe is just her second ever solo race in an IMOCA.

But while MacArthur dreamed of racing round the world since she was young, Cremer – a graduate of Paris’ elite HEC business school with a postgraduate business diploma from Kelley College, Indiana USA – turned her back on a business career to go ocean racing.

MacArthur sent a message of congratulations to Cremer,“Hi Clarisse, just a little message to say a big bravo for your race around the world. It’s great to see you at the finish line. It’s truly an exceptional lap. Well done for everything you have done! “

After early success in the Mini class in November 2018 – before she had sailed an IMOCA in earnest – she was chosen by the Banque Populaire team to skipper their Banque Populaire X IMOCA.  She had the benefit of a well prepared, straight-daggerboard boat, which had a great track record. The boat won the 2012-13 race as MACIF in the hands of Francois Gabart, and more recently as SMA winner of the Route du Rhum sailed by Paul Meilhat.

Dreaming of crossing an ocean

Clarisse gave up her business to join her boyfriend and future husband, Tanguy Le Turquais, and moved from Paris to live in Brittany.  He gave her the taste for ocean racing, and she began dreaming of crossing the Atlantic after working with him and supporting him on his Mini programme

She competed solo for the first time on the 2017 Mini Transat finishing second in the ‘series’ division and enjoyed herself so much that she moved to the Figaro class. Banque Populaire then offered her the chance to skipper their IMOCA project.

This she saw as a golden opportunity, but realised she had to prove herself. “I knew that there were other skippers who could have taken up this role. Having this chance comes with responsibilities.”

She set about learning all about IMOCAs, firstly alongside Banque Populaire’s 2016-17 Vendée Globe race winning skipper Armel Le Cléac’h. They finished sixth in the 2019 Transat Jacques Vabre, and then she sailed on a delivery trip back before her first solo race – June’s Vendée Arctique Les Sables where she finished 12th.

Next up – the Vendée Globe

The race was not kind to her in the early days. A series of fronts, as well as tropical storm Thêta caused damages which needed repairs, in particular to her hydro-generator, which had snapped off.

It was just one thing after another and she felt tired, which lead to a lot of self-questioning. “I’m afraid I’m going off my head. I know that each gale seriously affects the condition of my boat.” She openly talked about the times when things were getting her down.

However, Cremer – who celebrated her 31st birthday in the Pacific Ocean –  hung on and fought hard, showing the same resources she had managed to find within herself when racing Minis and Figaro boats.

“I never really felt like giving up,” she recently declared. “I learned to switch off my brain, and continue to advance, eat, sleep and look after myself.” In the Southern Ocean, she faced a series of low-pressure systems and sailed along the edge of the Ice Exclusion Zone with waves in excess of 20 feet and winds of more than 40 knots in the Pacific. 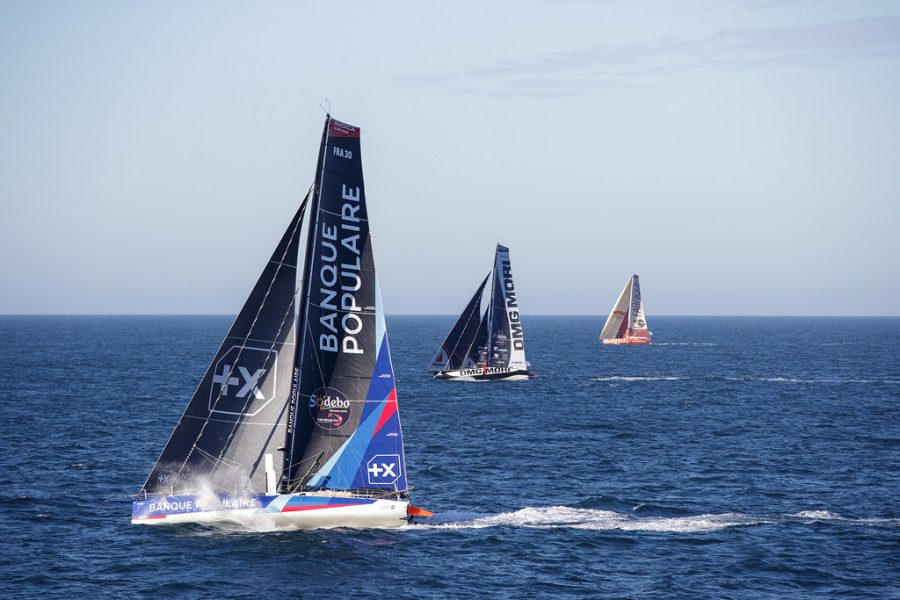 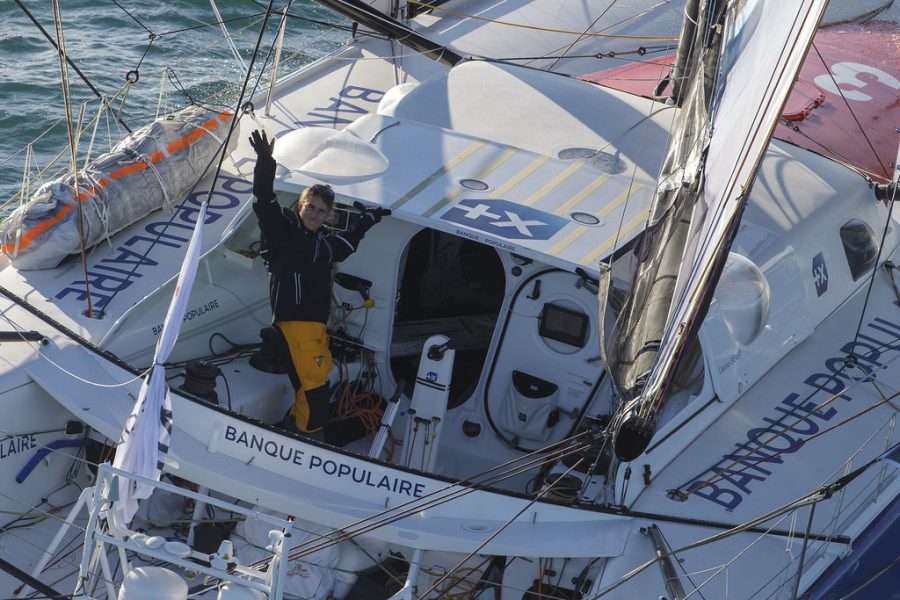 When Banque Populaire X passed Cape Horn, it was “a fantastic sight” and she believed she had finally “obtained her stripes”. She explained she was “relieved  to have got that far without giving up.” She managed to overtake Alan Roura on La Fabrique, and was racing alongside Romain Attanasio on PURE-Best Western Hotels & Resort for a long time. In the final stages she was doing battle with Armel Tripon sailing L’Occcitane en Provence. Heonly managed to get ahead in the final week.

The climb back up the Atlantic was no joyride, as she had to overcome one of her fears, climbing the mast twice to repair her J2. She also had a tricky time in the doldrums, which was contrasted with a final battle with big winds and heavy seas in the Bay of Biscay.

“If I could set off again around the world immediately, I would.” she said in recent days.

Her race in numbers

The Equator (from the start)

The Cape of Good Hope

The Equator (towards the finish)

Banque Populaire X was designed by Verdier VPLP and built at CDK – Mer Agitée. She was launched in March 2011.

The Cape 31 Sails On