The Handstand Project, borne out of a simple idea followed by an even simpler thought has brought about a massive movement of support from local and international crowds. S+L Contributor, Jeff Ayliffe has been taking a stand for what he believes in 365 days a year in 2019. He has dedicated a time every single day since 1 January 2019 to capture himself performing a hand stand. This is his story:

The craziest thing about the ‘Handstand Project’, was the fact that it started by pure coincidence. No plan, no goal, no buildup. It was just a random, split second decision on Jan 1 2019 to do a handstand at a river in Wilderness, and a throwaway comment, that started my daily commitment.

My son Taylan took a photograph of me inverted on some stones on the river, and realising that it was January 1, he said “Why not do handstand every day this year” Less than 30 minutes later, it had a name – (#Handstandproject365) and I had committed, on social media, to doing one every day. In the few weeks that followed, I had questioned the sanity of my decision, but little did I know at that time, that it would evolve into one of my most creatively challenging and satisfying projects I’d ever taken on.

I had set the bar very high right from the start, but when one is full of unbridled enthusiasm and passion for a new project, that is easy to do. Using my GoPro camera and clamp, I looked for visually spectacular locations, along with challenging handstands, and looked forward to raising the bar each day. A few weeks in, and I realised that the standard I had set myself would require huge commitment to carry through for 365 days. So I started to mix it up, if the handstand was not technically challenging, I elected to find a place about which I could share interesting historical facts, and in this, I found a balance. And so it grew. 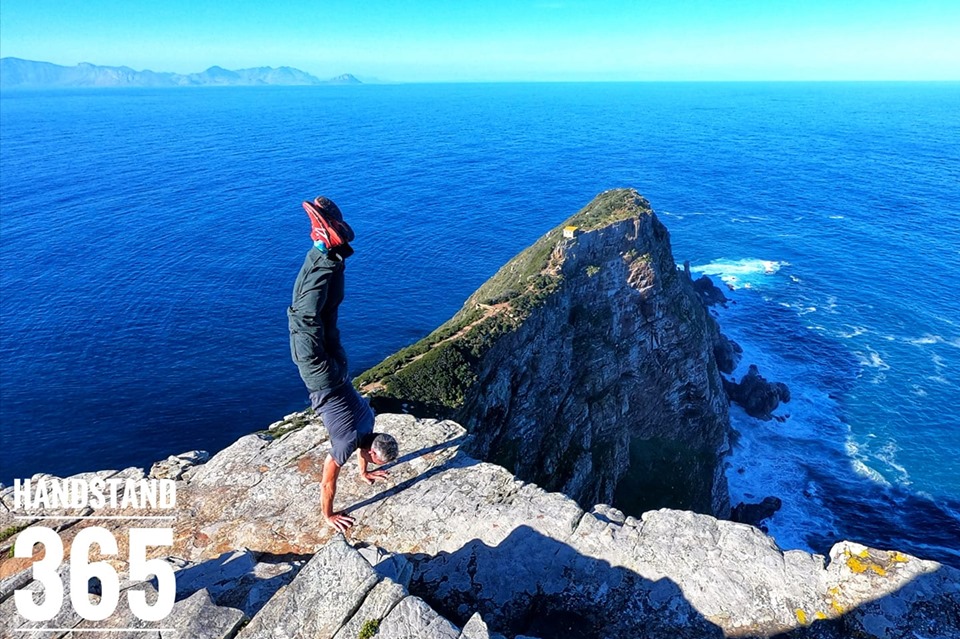 Physically, for the first 3-4 weeks, I could feel niggles in my shoulders and back, just as a result of the volumes of handstands, but as the year progressed, I experienced an incredible transformation. Along with those niggles, came technical challenges in difficult and slightly ‘sketchy’ handstand locations, and this would be, for me, the most interesting fact of the project. What happened after a few months was amazing. I felt my shoulder and core strength improve to the point that I never thought about it again, and I reached a stage that I was doing effortless handstands in places that I had previously walked away from. For me, this was the biggest ‘take home’ lesson.

In just a minute or 2 every day of handstands, I experienced how little practice is required to build strength, and become proficient. Literally, just a few minutes each day. Not hours. Minutes. Imagine if we applied this to all aspects of our lives?

In my first week, I attempted a one-arm handstand for variety, and it was a joke. I managed to lift my left arm 90 degrees, for a half second, and fell over. And my right arm felt the burden. 7 months later, I was doing 1 arm handstands, slowly transferring weight onto my right arm, counter-balancing with my legs, and slowly sweeping my left arm upwards and alongside my body with ease. Practice and repetition. That’s all it had taken.

The early months went by fast, and my handstands started to get a following, much of them as a result of me trying to focus on the overall scenery and history of the places, but it was my 100th that really started a change in terms of both media interest, and what I decided to do with it. In pursuit of something special for #100, I was assisted by KFM’s Ryan O’Conner to meet with the management of the Cape Town Stadium, after my requests had received a firm “NO!”

The 100th was on the glass roof of the CT stadium, and that image was on social media sites everywhere. Suddenly strangers were approaching me and asking “Aren’t you the handstand guy?” As a result, I made a decision to try and do something positive with the project, and began to look into linking it with a charity. I’m happy to say that we have subsequently made the Children’s Hospital Trust our official charity of choice.

Weeks became months, and as the project ran on, it seemingly became easier to maintain a list of what I hoped were locations and images that were engaging and interesting. I received an invite to do a handstand in Provincial Parliament with Beverly Schafer, the deputy speaker of the house, and as it went on, so it became easier to secure permission to do more obscure handstands.

From a safety aspect, whilst I could never let my guard down, I was feeling the advantage of being so current and conditioned, and I was finding myself able to do controlled inversions in areas that I would NEVER have considered a year ago. 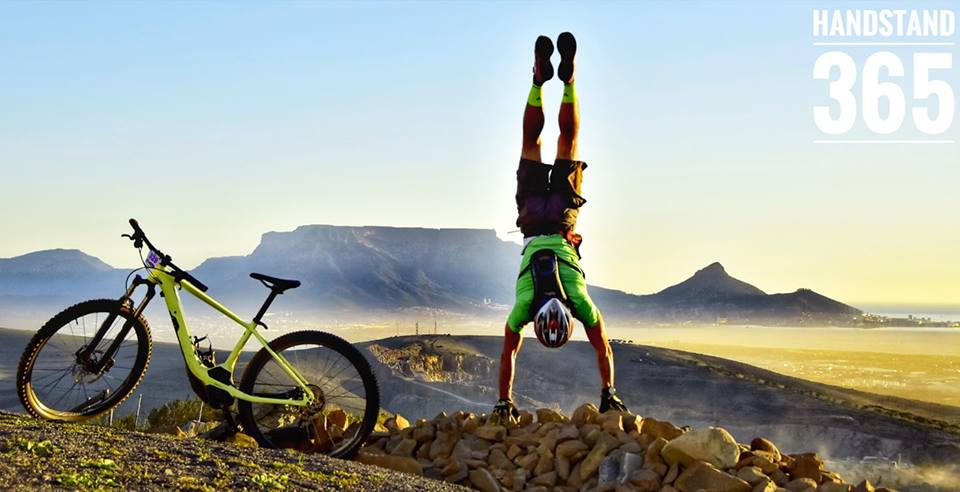 Mentally, the game got more important, as the areas got harder. In my sporting career, I had learned the importance of ‘focus’ and being in the zone. And for some of the very technical handstands, I was increasingly able to ‘block out’ all of the outside noise and interference. To the degree that I was able to go into an absolutely soundless bubble for those few seconds that I did my handstand. There were some spots that, in retrospect, were just bordering on safety, but thankfully, I got away without any drama. In fact my ONLY serious fall of 2019 was in Muizenberg. Doing a handstand on an elevated stance on the famous brightly colored wooden houses, I rushed to do a fast one as the sun gave me a short gap in cloud. I overbalanced, and rolled over forwards with ZERO good landing options. Somehow, and to this day I don’t understand how, I ended up walking away without serious injury. It had been a lucky escape, and good lesson. Most importantly, I gathered myself, realized my mistake, and got straight back up and did a good handstand to get the shot.

Another thoroughly enjoyable aspect of the project has been engaging with people who join me in the handstands. A young gymnast called Kayla has done many of them with me, her infectious joy, energy and enthusiasm just such a pleasure to be around. I met and did a handstand on Lions head with a performer from the Cirque De Soleil, another young gymnast overheard me planning a handstand in Wilderness, and after her parents approached me, we did a handstand together on a restaurant table. 7 time WSL Women’s surfing world champ Steph Gilmore joined me with a handstand in J Bay, along with Sal Masekela, as did WSL #10 Nikki Van Dijk of Australia, in a shopping center at night! Tish Jones, professional athlete and a member of Team GB at the Athletics World Champs, (and former Cape Town Marathon winner) was upside down with me in a Cape Town coffee shop, and so the list goes on.

And so to the holy-grail, the Table Mountain Aerial Cable Car.

I’ve always had a great relationship with Table Mountain, and in fact, her vertical Sandstone walls were the main reason for my move to the Cape. Thanks to an introduction by David Nel of Wilderness Search and Rescue, I was able to meet with Mike Williams and Ruaan Du Preez, and after a feasibility study, I was given the green light to do a handstand on top of the cable car. The conditions included a safety tether, and a windless pre-sunrise morning. When the day came together, we had top action sport photographer Jacque Marais sitting on top of the opposite car.

The controller stopped the 2 cars alongside one another in the gulley heading up to Africa Face, and as the sun popped over the Hottentots Holland mountains, on a windless Thursday morning above a waking city, I did the handstand that would begin a non-stop week of television interviews, radio interviews (Local and foreign) newspaper articles and social media engagements. With falling not really an option with potential of injury despite a roped tether, I had found this the most difficult. I had gone into my soundless bubble of focus, and interestingly, only when I watched the video afterwards did I hear the comments and support of the crew that had been up there.

As 2019 wound down, I ended the year with handstand number 365, at the exact place where it had all began. There were no people, it was just me and the GoPro, a light rain, and a moment of reflection about what the year had meant to me. Despite earlier plans of a mass-handstand event to close, the way I eventually ended it had felt perfect.

There are so many memorable ones, apart from the obvious like the Cable Car and CT stadium. On a SUP (stand up paddleboard) was super difficult, on the Pizza Ovens in Pomodoro restaurant was super sketchy, but now has a pizza named after it. The noon day gun in Cape Town – NEVER again, the concussion knocked me over and I felt as if my ear drums had burst. Interestingly, if I look at the pictures of my 365 handstands, I can remember EVERY one, and exactly what and how I was feeling on each handstand.

I have decided to continue in 2020. Why? Because I don’t see any negatives. It continues to challenge me creatively, and gives me inspiration. Physically it is amazing in what it’s doing for me. And a bigger goal, I have been touched by how this project has inspired a few people, and in turn, I am working on ideas that, through my handstand project, the inspiration can also be shared. 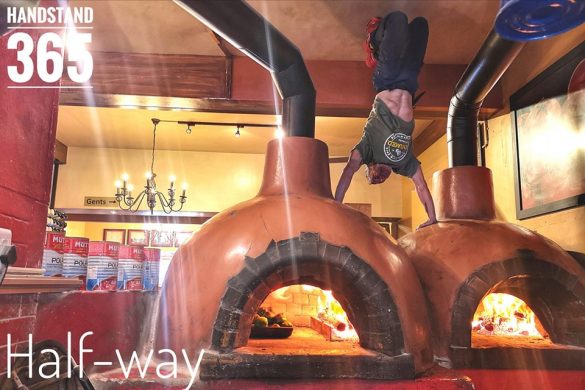 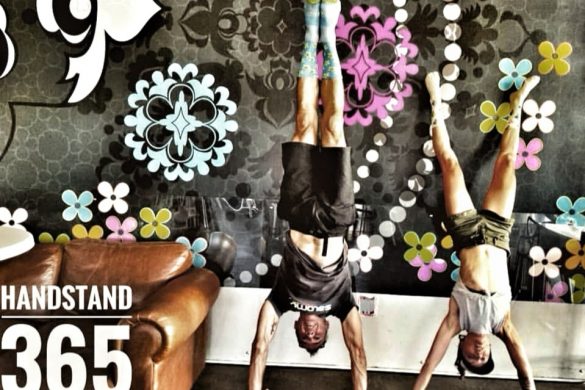 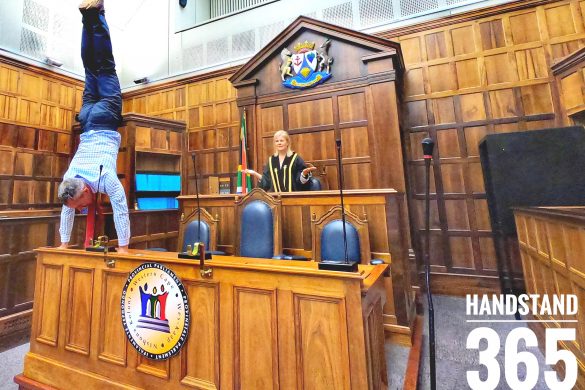 Continue to be amazed by Jeff’s Bravery and dedication by following him on social media to see his latest Handstand Pics as he posts them.