Flipflopi a dhow sailboat made entirely from plastic waste sailed 500km down the East African coast to create awareness of the longterm consequences of single-use plastic.

It was a crisp, still day and the thin thread of the horizon drew a circle around us, separating the ocean and the sky. I couldn’t help but marvel at how utterly privileged we as sailors are to experience life saturated with a million shades of blue is some kind of magic. You almost forget about the boat that is the one thing keeping you afloat, except that the boat itself is a riot of colour – a celebrity among sailing vessels and a warrior for the ocean we revere.

I glanced down at the deck of The Flipflopi, marvelling once again that here I was in the middle of the ocean on a boat made entirely from garbage that had washed up on the shores of Kenya. The concept never ceased to amaze during our 500km Indian Ocean voyage from Lamu, Kenya, to Stone Town, Zanzibar. Some say it was a crazy undertaking to build a boat from plastic trash, but the cause cemented the resolve of the 20 crew members: plastic is killing the ocean, and we need to do something drastic to inspire a call to action. 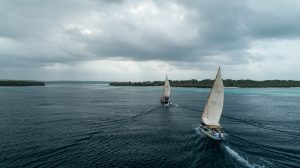 THE BIRTH OF A #PLASTICREVOLUTION

And so commenced the huge undertaking of designing and building a dhow entirely from plastic waste and sailing it down the East African coast. More importantly, this journey would educate local communities of the effects that plastic has on their own lives, and teach them how they could make a difference on home ground. The Flipflopi Project founders, Ben Morison and Dipesh Pabari, approached the legendary local Lamu wood wizard, Ali Skanda, to build this auspicious boat. Ali was immediately intrigued – being involved in several conservation projects already.  ‘The dhow is one of the world’s oldest forms of communication,’ he says. This exceptional dhow would be carrying one of the most important messages of our time across the Indian Ocean.

But first he had to build it…

In light of Kenya’s ban on single-use plastic bags this boat was sure to bring more media attention. When Nairobi product design engineer Leonard Schürg read about the build, he wanted in. Utilising the knowledge of the traditional boat builders, the team decided to use the keel design of the original 20-metre dhow to build a 10-metre prototype, and Leonard perfected the process of sorting, shredding, melting and moulding the plastic waste for the keel, ribs and other parts of the boat. The methods used were low key, local, and quite miraculous. Through a gruelling process of trial and error, and with a healthy dose of blood, sweat and tears, they proved it possible to build a boat constructed entirely from plastic and that the process is a viable solution to recycling existing plastic waste from the ocean.

The project made so many headlines that UN Environment decided to back the Lamu-Zanzibar expedition through its Clean Seas initiative. The massive global problem of plastic waste and its effect on the ocean can no longer be ignored, with eight million metric tons of plastic entering the sea every year ‘on top of the estimated 150 metric tons that currently circulate our marine environments’, according to oceanconservancy.org.

The main goal of The Flipflopi Project: to create awareness. Although the expedition would naturally influence local communities along the route, the main aim was to engage governments, the general public and the private sector in the fight against marine plastic pollution. The partnership with the UN Environment Clean Seas campaign was a perfect fit and would help in creating global awareness during the sail.

With the sounds of the swoosh of the water and the groan of a tightly spun rope, our plastic dhow set sail. Our team of 20 crew was separated into three groups initially. Ali would captain The Flipflopi for the first stretch with our best Swahili dhow sailors. The rookie sailors, scientists and film crew were stationed on Lamu Dhow, Ali’s magnificent wooden dhow and the expedition support boat, while our communications team remained on land to ensure that events and partners were adequately activated for our first few arrivals. We anchored at Malindi, where we celebrated our very first expedition sail success with beers and dinner at Che Shale beach retreat before our early morning departure to Watamu. We were enthralled by the beauty of this bay.

We could never have imagined the positive response we would receive with each mooring along our route. People were very taken by this iconic and colourful boat, which seemed to give a dire situation a positive outlook. At every stop we were welcomed by cheering crowds and we kept hearing how our journey gave people hope about the future of single-use plastic, rather than spreading doom and gloom about a lost cause. Our workshops and message seemed to inspire resolve and the promise of lifestyle changes in individuals as opposed to an attitude of despair and finger-pointing, which is a common response to an anti-plastic campaign.

On arrival at Kilifi Creek we had a particularly special encounter. We were all exhausted yet elated after a long day’s sail and our entire crew spontaneously jumped into the water. The two boats dropped anchor side by side, and the crews shared stories while swimming. Ali appeared carrying a tray of oranges above the water and a group of young local boys joined us for a diving competition from the deck of The Flipflopi. This type of camaraderie is priceless; we lived for these moments on our trip. 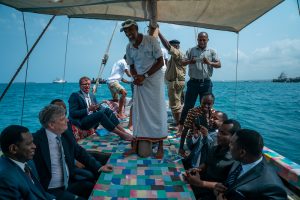 The true sailing adventure commenced when our communications crew finally joined us on the dhows, and we set off for Mombasa, Diani and Shimoni. Dhow life had us cooking our meals on deck over open fires, preparing the same fare under the same stars as ancient Arabian and Swahili sailors had done before us. It emphasised the importance of our journey in that it became abundantly clear how different the shores look now compared with how they did when sailors first discovered the East African coastline. We were met with a deluge of plastic at each stop, and the research our scientists collected along the way demonstrated that plastic is everywhere – even where we couldn’t see it.

After our Pemba Channel crossing, we found a haven of pristine beauty. The Manta Resort and its environmental endeavour, The Kwanini Foundation, has demonstrated how a love for the ocean and a passion for ecotourism can result in a successful conservation effort for the future of the Pemba Island community. Waste management is a key pillar of their sustainable and circular tourism conservation philosophy – and the result is a paradise above and below water.

An important event awaited us in Zanzibar as members of The Flipflopi Project would have the chance to discuss safeguarding the ecological future of East African shores with policy makers and officials from the Zanzibar government as well as the president of the UN Environment.

Our boats were dwarfed by the bustle of the Zanzibar harbour, but we were elated at having communicated our message to an audience of over 850 million people via global media networks – our efforts had not been in vain. 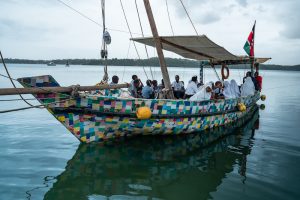 THE PAST AND THE FUTURE

With her successful journey and the media coverage and support she brought, The Flipflopi set in motion a wave of change for the future of the Indian Ocean and beyond with governments, policy makers and businesses all pledging their allegiance to the #PlasticRevolution. The Flipflopi attracted the attention of hundreds of dignitaries and representatives from around the world at the fourth session of the UN Environmental Assembly (UNEA), becoming a beacon of change and a true poster child for its ‘Innovative Solutions for Environmental Challenges and Sustainable Consumption and Production’ theme.

The future of The Flipflopi looks as bright as her hull, with plans and funding drives already underway to build her big sister: a 20-metre plastic dhow that will sail from Lamu to Cape Town and beyond – working towards creating a beautiful, boundless and immaculate ocean for future generations of sailors and sea lovers to enjoy.

A Car You Need or a Car You Desire?