16 November: The sailing season in the southern hemisphere should be well under way by now, producing results non-stop, but the restrictions of Covid have hit the sailing clubs hard, leading to very little or no racing taking place at all. The 18 Footer League did manage to complete their spring championship circuit, and the RCYC managed to host their Carpe Diem race. And luckily for us die-hard fans, the Vendée Globe Race continues to thrill. But the big weekend news is in another sport – Lewis Hamilton has equalled Michael Schumacher’s F1 world title record – with 7 World Champ titles to his name!

Who would have thought that the first week since the start of this non-stop around the world race would produce such an interesting and varied set of circumstances. We’ve seen emergency repairs to L’Occitane en Provence, and damage to the rudder of Charal by an unidentified flying object. Jérémie Beyou and his team are working around the clock to get the rudder repaired. He has to re-start the race within 15 days of the official start, which is by 23rd November. And tropical storm Theta added further challenges when she hit the skippers and the boats this weekend.

THIS NEWS JUST IN:

French skipper Nicolas Troussel, who was lying in seventh place, has dismasted on CORUM L’Épargne this morning. He was racing south in brisk NE’ly trade-wind conditions some 260 nautical miles NW of the Cape Verde islands.

Troussel, 46, was not injured and is in the process of securing the boat before further assessing the situation.

Who would have thought that an older technology boat Yes we Cam, would keep the newer technology, faster boats on their toes, even if it was just for a while? But now Alex Thomson has charged ahead leading the pack after sailing 2768NM. See his day 6 update below.

And in other news: Armel Tripon climbs the mast to make a vital repair

Armel Tripon climbed the fifteen metre mast on board L’Occitane en Provence on Friday to fix his J3 sail, and secure the rig. He is now able to use his mainsail and set the headsails fitted to the top of the mast. 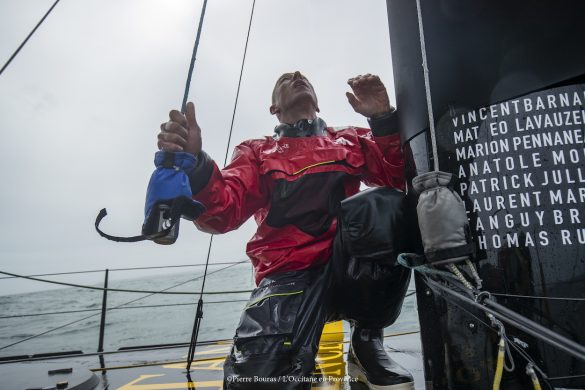 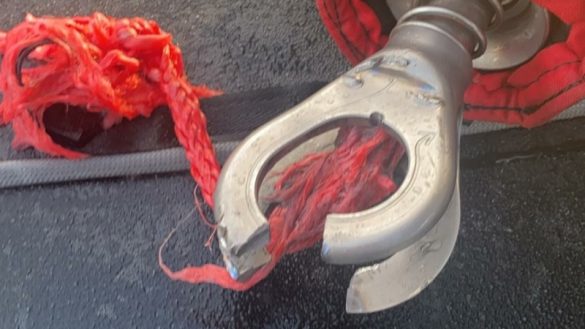 The race goes on
Armel Tripon never lost morale despite the damage, which has meant that he is not fighting it out with the leaders of the race. He has fallen behind them now – they are one weather system ahead.

“I’m expecting to be possibly 1,000 miles behind in the Doldrums, because the boats ahead have had Theta and it will take 24 hours to get out of the area of light winds. But I knew it, it’s the hard law of sport and when I think of Jérémie (Beyou, who has turned back towards Les Sables-d’Olonne) I can’t complain. The road is very long, there will be opportunities… and the race goes on, that’s the main thing!”

Understanding the damage and the repair
The damage: the hook of the J3 gave way as the boats were heading towards the front off Portugal. This sail’s forestay plays a structural role in the rigging and the sail fell to the deck. L’Occitane en Provence could no longer use any of the foresails so as not to risk a dismasting. Armel turned back to preserve the boat and then considered finding an anchorage off Spain to attempt repairs.

On the same day a decision was taken to make the repair at sea. Armel resumed racing and as a precaution, reduced the sail area while continuing at a relatively low speed so as not to risk a dismasting.

A successful first ascent up the mast was completed on Friday. Armel has managed to re-set a sail, which now holds the boat’s mast in place and prevents it from going aft (which is a major function of the broken J3). The main sail and the full spinnaker can now be used in full.

A small fleet took part in the Carpe Diem race run by Royal Cape Yacht Club out of Cape Town. 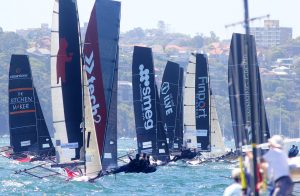 With such a close battle in the leading group, the first rounding was critical as the experienced Smeg team only had to go to the centre mark while most of the other leaders had to sail to the furthest mark.

Smeg quickly grabbed the lead from Andoo and Yandoo, which also gained at the centre mark.

On the following spinnaker run back to the wing mark off the southern end of Shark Island in Rose Bay, Smeg opened up a break over Yandoo with a group led by The Kitchen Maker-Caesarstone (Jordan Girdis), followed by tech2, Andoo, Finport Finance, Winning Group and Ilve (Pedro Vozone).

Smeg’s lead was between 25-30s at the bottom mark and the first four placings remained unchanged as the fleet headed back to the windward marks off the Beashel Buoy for the second time.

The race took on a completely different look this time as Smeg had increased her lead to one minute over Yandoo.

The racing behind the two leaders was close and positions changed often over the next two legs of the course.

The Kitchen Maker-Caesarstone, Andoo and tech2 were having a wonderful battle on the spinnaker run down the centre of Sydney Harbour while a mini race was taking place between three teams, Finport Finance, Shaw & Partners and Winning Group which had been disadvantaged by having to sail each lap to the longest mark.

After a lengthy retirement from the 18s, Anthony Young made a return to the class as skipper of Rag & Famish Hotel and showed he still had the skills as he brought home in fourth place after being well back in the fleet in the early stage of the race.

After strong southerly winds and a light wind race day last week, the conditions were a good guide to the upcoming NSW Championship, which begins on Sydney Harbour next Sunday, November 22nd. This event gave the new teams an opportunity to check their pace against the more experienced teams ahead of the NSW Champs.

It’s official: Lewis Hamilton is a seven-time Formula 1 World Champion. And he sealed title #7 with a truly brilliant drive to victory in the Turkish Grand Prix.

With a commanding lead over team mate Valtteri Bottas in the championship coming into this race, Hamilton only needed to finish ahead of the Finn to ensure the crown would be his again. But such caution is simply not Hamilton’s style, and after starting sixth, he drove a superbly managed race in very tricky conditions to take the win and the championship.

The win alone was enough to claim championship #7, but it was even more assured after a disastrous race for Valtteri Bottas – the only man who could have stopped Hamilton winning the title today – who spun six times en route to a P14 finish. Lance Stroll was in command of the early stages of the race after sealing his maiden pole position on Saturday with a fantastic performance in qualifying.  But after the Racing Point driver stopped for tyres mid-way through the race, he dropped down the order, leaving the field clear for Hamilton to storm to victory on a day when the changeable conditions and the slippery track surface made almost every lap something of a lottery for the drivers. 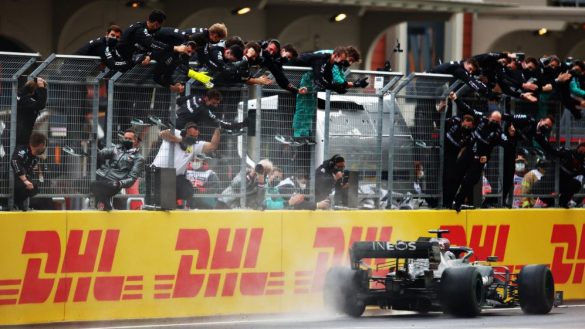 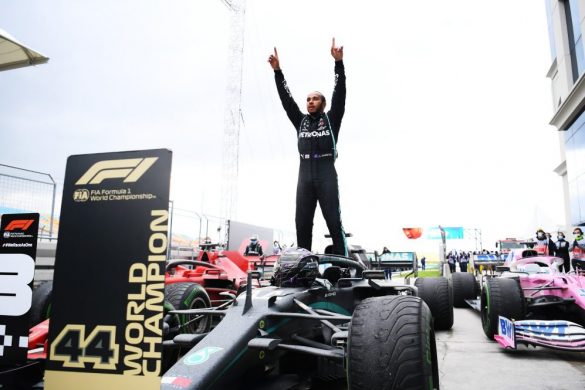 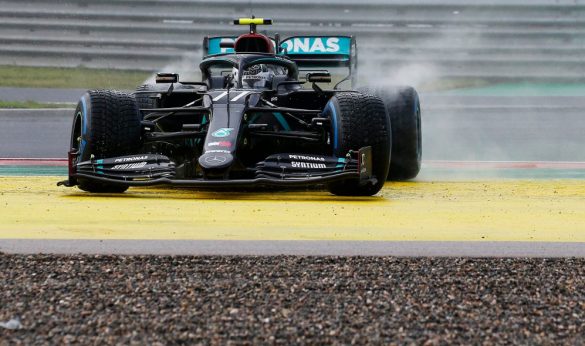 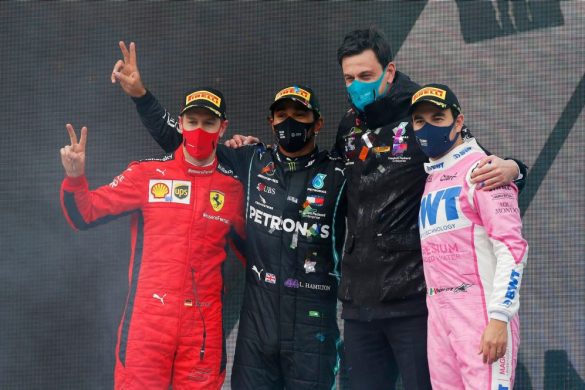 “I definitely am a bit lost for words. I think naturally I have to always start with saying such a huge thank you to all the guys that are here and all the guys back at the factory, both our factories, and all our partners for enabling us and giving us this opportunity.

“You know, I wouldn’t be able to do this if I didn’t join this team and the journey we’ve been on has been monumental. And I’m so proud of them. I also want to say a big, big thank you to team LH for sticking with me all these years and then to my family, you know.

“We dreamed of this when we were young and when I was young, when we were watching the Grand Prix, and this is way, way beyond our dreams. I think it’s so important for kids out there to hopefully see this and know don’t listen to anyway who says you can’t achieve something. Dream the impossible and speak it into insistence. You have to work for it, you have to chase it and never give up, and never doubt yourself” – Lewis Hamilton, Mercedes

How To Not Crash At 50knots In SailGP