Sharktober | A Month To Celebrate Sharks

The Two Oceans Aquarium has named October month Sharktober. Sharks are often portrayed as vicious hunters, scary stalkers or single-minded predators in the media, but what really makes these misunderstood animals tick?

Renée Leeuwner says, “The Two Oceans Aquarium is doubly excited about Sharktober – not only do we get to promote one of our favourite animal families, but we also get to welcome our new partner in conservation awareness, the Save Our Seas Foundation. Together, we hope to promote education and conservation around these often endangered sea animals. We can think of no better way to launch Sharktober than to announce that we’ve officially renamed our largest exhibit, the Save Our Seas Foundation Shark Exhibit, in honour of this new partnership”.

Since 2003, the Save Our Seas Foundation has been dedicated to protecting life in our oceans, especially sharks and rays. “We support passionate and innovative researchers, conservationists and educators around the globe by funding their projects and helping them to tell important scientific and environmental stories. Our centres in South Africa, Seychelles and the USA are dedicated to learning about sharks and rays and sharing that knowledge”.

South Africa is home to 117 known species of shark – more than a quarter of the world’s shark species swim in our waters! You might think that you’d recognise most of them, but trust us, the list is longer and stranger than you think.

The Two Oceans Aquarium will showcase a few shark species on their website every week. Here are the first few species we can learn about.

The striped pyjama shark may be the “villain” of the critically acclaimed My Octopus Teacher, but there is more to these little catsharks than meets the eye. Take a look at what life is like for a catshark. 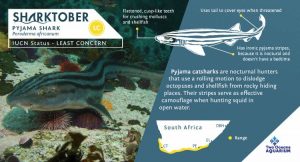 Known for their ability to survive freshwater, and for having the strongest bite force of any shark, Zambezi sharks equip their young with some of the best evolutionary advantages of any shark species. However, their reliance on freshwater ecosystems puts them at unique risks of habitat destruction and pollution, and they are listed as Near Threatened by the IUCN. 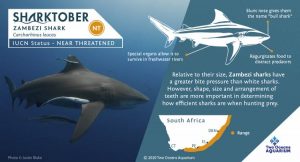 Shortfin Mako sharks are found throughout South Africa’s offshore waters. They are known for being the fastest swimming shark species in the world, able to approach 100km/h in short bursts, and use a combination of excellent vision and metallic blue countershading camouflage to ambush dangerous prey, such as swordfish and other large sharks. Due to pressure from targeted commercial and sport fishing, as well as the pelagic longline fishing industry’s by-catch, Shortfin Mako sharks are endangered.