A few different species are seen on our shores. This variety of species was reflected in the turtles released. They included 21 Loggerheads (Luis, Annie & 19 hatchlings), 1 Hawksbill turtle (Olaf) and 1 Green turtle – Roo.

The turtles were rescued, rehabilitated and in the care of the Aquarium Foundation for the past year or so.

Turtles rescued from far and wide

Sea turtles that are brought into the turtle rehabilitation programme at the Two Oceans Aquarium have been rescued from beaches around the Western Cape. The NSRI works closely with the Aquarium Foundation in terms of rescue and transport of our shelly friends.

Most of the turtles that are rescued are Loggerhead hatchlings that have hatched on the northern beaches of KwaZulu-Natal, which have caught the warm Agulhas current down the South African coastline. Once they reach the south coast and the slow currents, the turtles can end up in the surrounding colder waters, which can cause the turtles to suffer from cold shock, injury and dehydration. Once the turtles are compromised, strong winds and currents expel them onto our beaches. This occurs between March and July every year.

A road to recovery

Once these hatchlings arrive at the Aquarium Foundation’s turtle rehabilitation programme they are admitted as individual patients. Over the following 6-9 months they receive regular medical care, cleaning, daily feeding (twice a day) and lots of love.

As the end of the year approaches and the turtles are healthy, have gained good weight and they are behaving like strong turtles, the vet clears them for release. They receive a microchip and are then released off Cape Point (about 20-30 nautical miles) back into the warmer waters (this is usually between November and March).

Throughout the year (there is no specific season) the NSRI and members of the public also rescue other turtles of varying species and size – Green turtles, Hawksbills, Olive Ridleys and Loggerheads, which are then taken to the Aquarium Foundation’s turtle rehabilitation programme for further care. 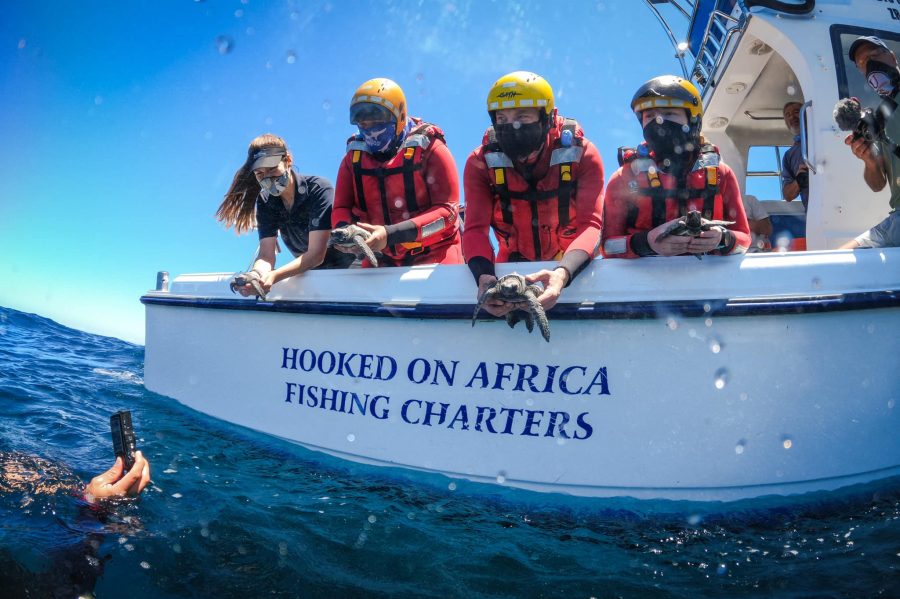 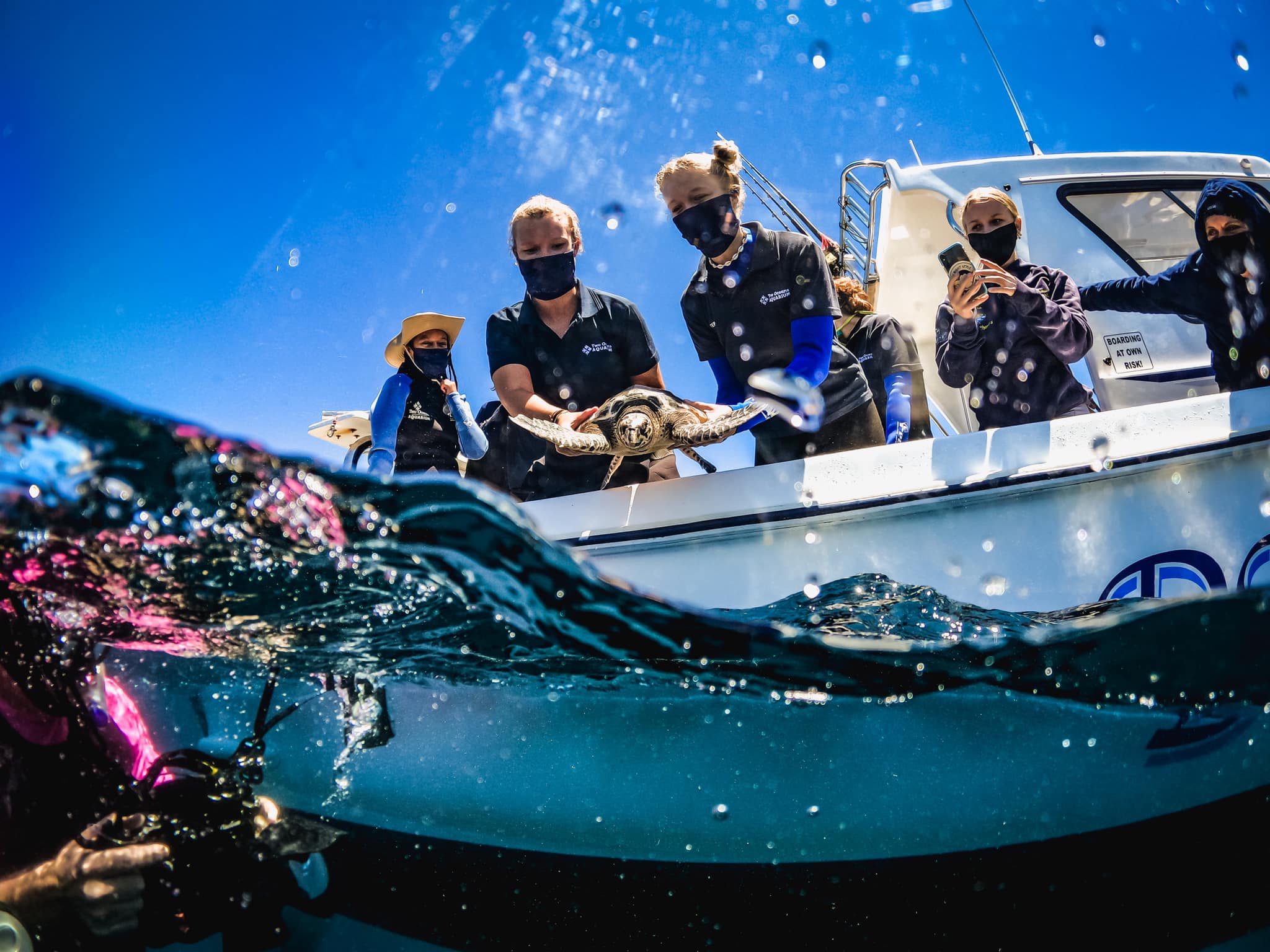 Reasons for strandings are often quite different, ranging from infection to bite injuries, plastic ingestion, a boat strike injury and ghost fishing gear, as was the case with Annette back in July 2019. Due to the reasons for stranding being so varied, the duration of rehabilitation can also range from just a few months to many years.

Annette (Annie), fondly named by the NSRI because she was stranded in a net, was rescued by NSRI Station 26 Kommetjie on Noordhoek. She was caught in fishing gear along with a seal. The seal was successfully released, but Annie’s injuries were severe so she was brought to the Aquarium Foundation’s rehabilitation programme.

Annie underwent intensive critical care in the months that followed as she was incredibly weak, evident by her floating with her tail-end up, and she was not willing to eat.  The turtle-care staff used all available diagnostic tools to determine what was wrong with her. This included 2 x CT scans, ultrasounds, endoscopes and x-ray studies. Alongside this diagnostic work Annie was fed regularly and was provided with inter-coelomic fluids.

Annie was then moved into the I&J Ocean Exhibit in November 2019 with the hope that she would do well with extra space and depth to swim. This proved to be the case as Annie quickly adapted to her new home and started eating a month later (it took her 5 months to start eating).

In the last year Annie has been a powerful ambassador for the Two Oceans Aquarium, teaching visitors about the dangers of fishing gear and plastic in the ocean. By visiting Annie, many people have fallen in love with marine life and have been inspired to help protect the oceans.

Despite recovering really well, Annie is still floating at a 45-degree angle, with her bottom up when she rests on the sand. The Aquarium Foundation staff fondly refer to this unique pose as ‘bubble butt’. While it looks a bit awkward, Annie is able to do all the things a healthy turtle needs to be able to do.  She can swim, dive, feed, breathe, chase and rest, which is why she was cleared for release by the Aquarium Foundation vet. It is hoped that having an ocean of space and loads more depth will help sort out her bubble butt.  Staff are also excited to have satellite-tagged her in collaboration with the Department of Environment, Forestry and Fisheries. They will be able to track her movements and ensure that all is in order, and see where she ventures to.

‘Releasing these recovered, and now healthy and strong sea turtles back into the ocean is always such a treat and really incredibly special. All turtle species are endangered so for these rescued turtles to get a second chance is just magic. What inspires me every year too is the fact that each and every one of these turtles survived because they were rescued by a caring person. People still do good. The NSRI, our friends and ocean partners, has more than a thousand volunteers doing good by saving lives – both humans and animals. And thanks to them, Annie, and many of the little hatchlings were rescued and brought to us. This is a good start to 2021, and we are very excited to follow the oceanic journeys of Annie and Luis who are both satellite-tagged in collaboration with the Department of Environment, Forestry and Fisheries’, said Maryke Musson, CEO of the Two Oceans Aquarium Education Foundation.

Turtles are incredible creatures and natural survivors, from the moment they hatch they are on their own and their knowledge and understanding of how to do things is instinctual. This means that even if they spend years in a rehabilitation environment, they will never unlearn how to hunt, swim, forage and fend for themselves. 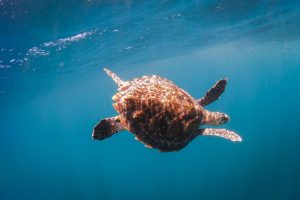 ‘Totally awesome today to put our turtles back into the ocean after their rehab at the Two Oceans Aquarium. Our marine animal rescue programmes are the visible expression of our consciousness of the very real threats facing our marine ecosystem. Our volunteers are totally ‘stoked’ being involved with turtle rescues and now directly in their release back into their home’ said Dr Cleeve Robertson, NSRI CEO.

Read more about each turtles awesome story of rescue and rehabilitation.

What to do if you find a stranded turtle. There are certain do’s and don’ts. Read our tips here on what to do.