As the VOR fleet heads to Newport, Rhode Island on Leg 8 of the Volvo Ocean Race, having the right food, at the right time, is much less of a luxury than a fact of survival for the sailors. Life on board is no picnic and the Volvo Ocean Race menus have to ensure that the sailors get the fuel they need to keep the muscles strong, to keep the mind sharp, morale high, and weight-loss low.

Dr Stefan Branth, who has been studying the impact of nutrition on the Volvo Ocean Race for nearly 20 years, found that in the earliest editions of the race some 40 years ago, where the larders were brimming with boxes of roast beef, baked beans, and beer, that approach to nutrition served up severe consequences, with the lack of adequate food intake affecting performance considerably.

When the Volvo Ocean Race started out in 1973 as the Whitbread Round The World Race, crews brought huge quantities of food and drinks on board. They dined well, and some crews even dressed for dinner every evening. Today, it’s a totally different story. 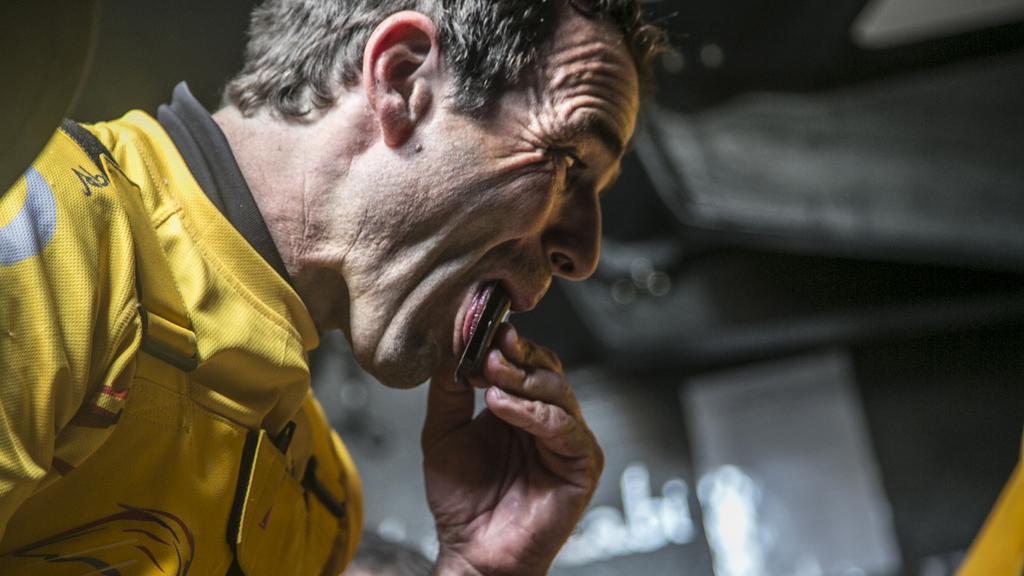 Our modern-day crews would do anything for just a sniff of that, as they face the unenviable prospect of nine long months of freeze-dried but highly nutritious fare.

Indeed, Dr Branth noted that in a study of the 1993/1994 edition that a sustenance shortfall ‘caused a state of negative energy balance during all three legs, as weight loss occurred in almost all crew members’.

In 2001/2002, Dr Branth returned to the race – studying sailors for five months and noted that the long-term metabolic and mental stress they were under had major implications on their health.

Because each sailor in the Volvo Ocean Race burns around 5,000 calories per day, (that’s nearly three times the amount of you or me), which is the equivalent of about a dozen rump steaks, 35 jacket potatoes, or 78 hard-boiled eggs. However, it’s not about packing in the calories, it’s all about weight… the weight of the boat which is affected by the weight of the crew, and of course teams can cleverly and strategically use the weight of food stocks to their advantage.

Making them lighter by sucking the moisture out and freeze-drying, or stacking them heavy at certain points of the boat for better balance, can save a crew valuable seconds and inches – seconds and inches which could make all the difference when it comes to the endgame.

Although the views and ambience may be spectacular, very few people would rush to make a reservation at this restaurant. Freeze-dried dishes such as Spaghetti Bolognese, Chili Con Carne and Chicken Curry have all featured on the Volvo Ocean Race menus, re-activated using desalinated sea water, of course – and they are backed up with protein shakes and power bars to keep pangs at bay. Now, the crews go an entire leg – up to 20 more days – without eating any fresh food. Even with this weight reduction, it takes 12.5kg of freeze-dried food to feed 10 people for one day. 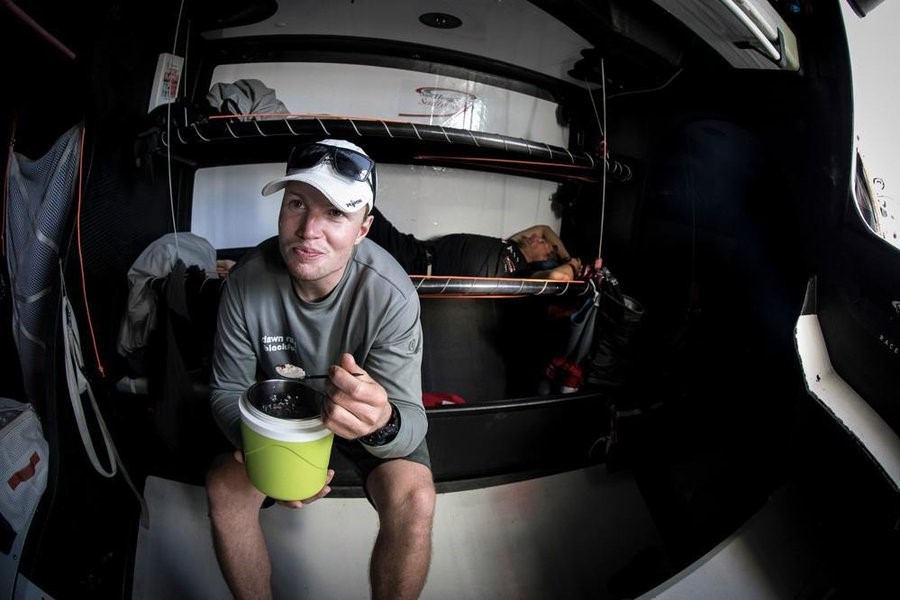 Breakfast and bedroom rolled into one © KONRAD FROST/VOLVO OCEAN RACE

The other two meals are made in an individual thermos pot. “You pack the meal into the pot, boil the kettle, which is filled with desalinated water made with a water maker, and pour the water into the pot.” Easy, right? 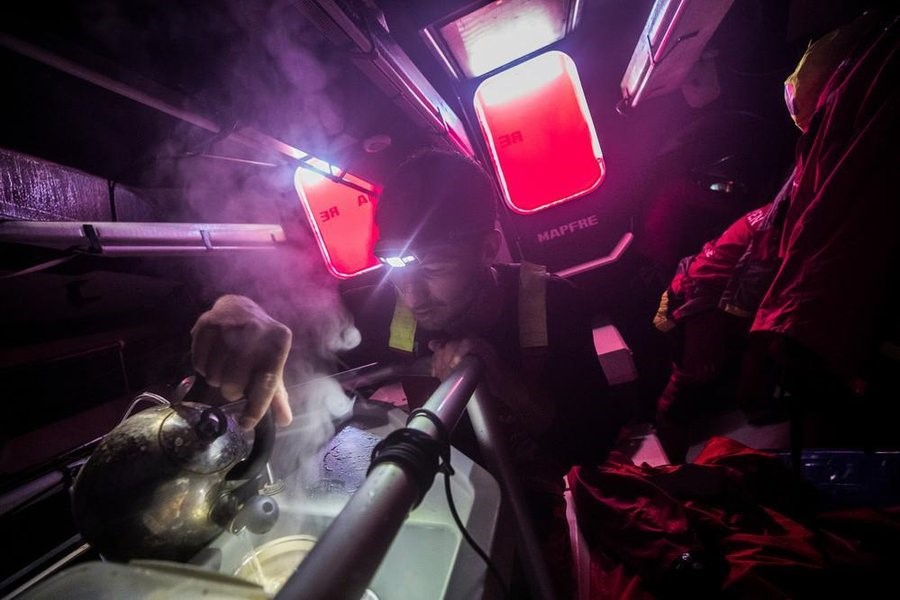 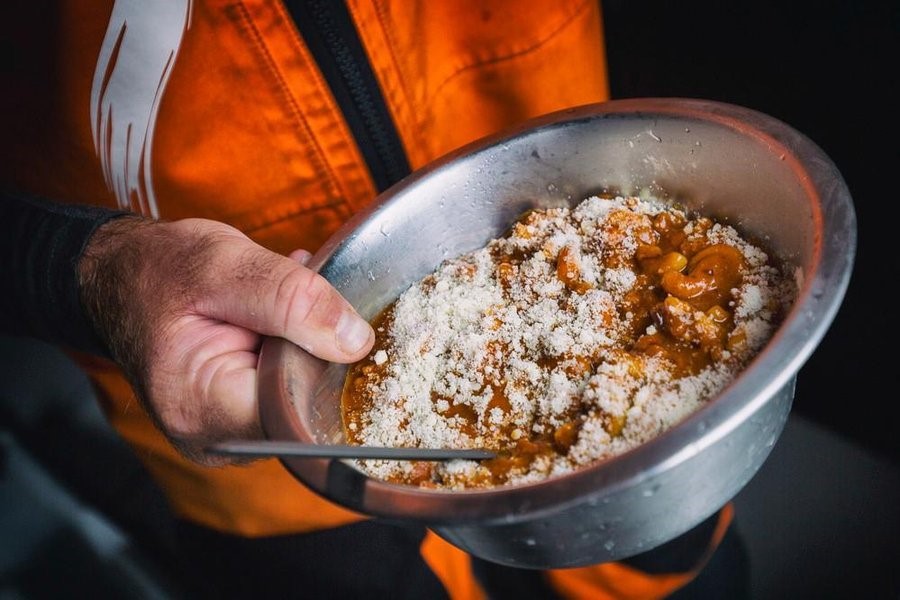 Each of the crew has a spork – a combined spoon and fork. Meals are supplemented with snacks like biltong/beef jerky, nuts, dried fruit, protein bars and flapjacks. One of the most important pieces of Volvo Ocean Race knowledge, which Daryl Wislang, (watch captain on Dongfeng Race Team) learnt from fellow crew member Stu Bannatyne, is how to turn a freeze-dried cottage pie into the perfect meal.

SailGP Racing On The Edge Episode 6 and...