Travel Tuesday: The Seychelles – An Eco-Sanctuary

As sailing regions and eco-destinations go, the Seychelles Islands deliver spectacularly on every level. This group of islands, contoured by glistening white beaches and cerulean waters, is an apex travel experience and nothing short of paradisal. Allison Foat gives us a tour.

It was the late novelist and travel writer Lawrence Durrell who once commented, ‘There are people who find islands somehow irresistible. The mere knowledge that they are on an island, a little world surrounded by the sea, fills them with an indescribable intoxication.’ He was on point. Tropical-island getaways are the thing of dreams and, for myriad reasons, Seychelles is coveted as one of the most desirable of them all.

Vasco da Gama is credited with the first sighting of the Seychelles in 1503. The territory, however, remained uninhabited for centuries until the French laid claim to it in 1772 and, in 1810, transferred possession to the British. Independence from the Crown was only gained in 1976. The Seychelles is the smallest republic in Africa, with less than 100 000 inhabitants and an exclusive economic zone the size of Germany, France and the UK combined. 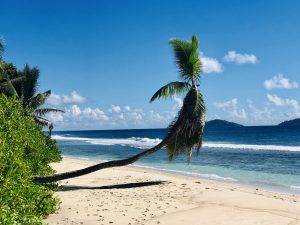 Glittering in the Western Indian Ocean are the 115 islands, raised atolls and islets that make up the Seychelles archipelago. There are 43 granitic inner islands that are clustered around the principal islands of Mahé, Praslin and La Digue, while further south and closer to Madagascar lie the five groups of lower-lying outer coralline islands.

Mahé is the Seychelles’ trade hub, its largest island and home to 90% of the population. It’s also the starting point for most tourists flying in for their dream holiday. The capital, Victoria, is a microcosm of the ethnic diversity and inclusivity that defines the republic. Named after Queen Victoria, the colourful, pint-sized city is framed by the Morne Seychellois mountain, its slopes draped in a sprawling rainforest and nature park crisscrossed by incredible hiking trails. Travellers often overlook Victoria in their haste to cast off to the islands and resorts, missing much of what it has to offer. It’s a classic primer to Creole life, opening a window into Seychellois society and a multicultural heritage peppered with French, British and East African ancestry.

Downtown Victoria’s main attractions are in close proximity to one another and can be enjoyed in the morning. Take in the Arul Mihu Navasakthi Vinayagar Hindu temple, the Old Town, Market Street with its hole-in-the-wall bakeries, shops and cafés, the Natural History Museum and the Sir Selwyn Selwyn-Clarke Market. Don’t miss Jivan’s Imports in Albert Street, a family-owned business established in 1925 by the legendary Kantilal Jivan Shah, regarded as Seychelles’ conservation pioneer. Victoria Clocktower, aka ‘Lorloz’, has stood as the town’s most prominent feature since 1903. Further up the hill, La Misère viewpoint throws a panoramic perspective over the bay towards Île aux Cerfs, Sainte Anne Marine National Park and Eden Island. With 65 beaches on Mahé alone, blue-chip options like Beau Vallon and L’Anse des Anglais are in abundance, and just as gorgeous as those that beckon from across the water. 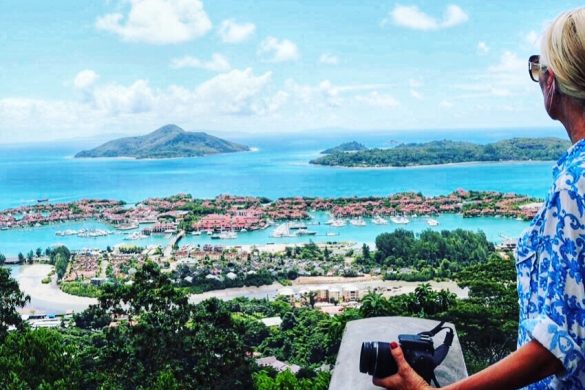 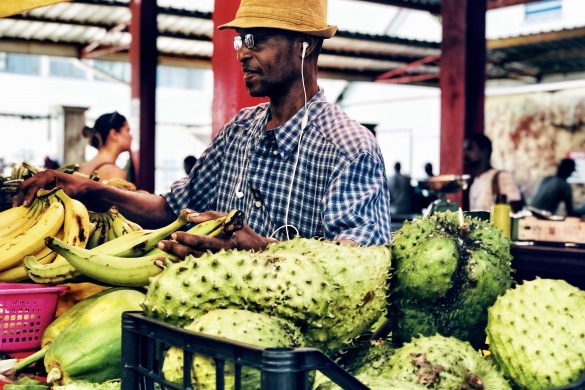 Land marvels aside, one of the most glorious ways to explore this alluring destination is under sail. We chartered a skippered 44-foot catamaran through Sunsail, which by design is optimised for smooth sailing and benefits from a shallow draft that enabled us to drop anchor very close to shore in idyllic conditions. Inside, the salon-come-galley is enclosed with large windows creating a light and airy feel, and four full-height cabins are positioned port and starboard for maximum privacy. Life onboard was laid-back and our travel pace unhurried. Days that dawned to dazzling coastal views morphed between eating, reading, catnapping, swimming and island hopping, and ended on the bow as we sipped rum cocktails and ogled bewitching sunsets, the silence interrupted only by the soft sounds of wavelets lapping against the boat. 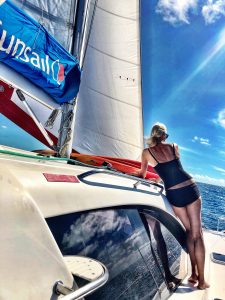 Most of the time the sail distances between islands were short, the longest being from Mahé to Praslin, about four hours under full sail across the open water, spinnaker billowing above and dolphins bow-riding alongside. It was such a thrill! At the helm was Mervyn Cafrine, a sailor with 20 years’ experience, who doubled as our travel concierge. In step with our passion for nature and aqua sports like kayaking, stand-up paddling, diving and snorkelling (we hired all that equipment at the boat base), he curated our itinerary with great consideration and accuracy. Cafrine was also quite the fisherman and many evenings saw us feasting on freshly caught red snapper and barracuda cooked in his grandmother’s ginger, garlic, onion and chilli sauce, a traditional Creole speciality.

Praslin is Seychelles’ second-biggest island with 7 000 inhabitants. Known for its luxuriant vegetation it’s also the island where you’ll find Anse Lazio and Anse Georgette, two beaches that regularly crack the best-in-the-world lists. Anse Volbert is the main tourist beach which, in typical fashion, is surprisingly uncrowded, something we noticed wherever we went. One of the main attractions on Praslin is the Vallée de Mai, a primaeval palm forest embedded within the Praslin National Park and a UNESCO World Heritage Site. Seychellois writer Glynn Burridge once described it as a ‘cathedral of nature’, a perfect description because of the stillness you’ll experience there. The reserve is a sanctuary for the endangered black parrot and is one of only two places in the world – the other being nearby Curieuse – where the Coco de Mer palm grows. Its seed is the largest known to man and can weigh up to 25kg.

Twenty minutes sail northeast of Praslin lies Curieuse, a biosphere reserve that has seen its fair share of drama. In 1771, in an abhorrent act of eco-hooliganism, French settlers razed it to the ground to make way for Coco de Mer palm groves. For more than 100 years thereafter, Curieuse was used as a leper colony. In 2017, the old Doctor’s House, built in 1873 by Dr William MacGregor was reopened after a year of refurbishment and is now a national monument as well as an education and information centre. Around 300 Aldabra tortoises roam freely on Curieuse and there is a nursery that breeds and nurtures juveniles until they are five years old, ensuring the longevity of this prehistoric species.

Visitors can feed the tortoises with leaves provided by their minders who keep a constant eye on their precious geriatric charges, some as old as 160 years. Curieuse is also a crucial breeding ground for hawksbill and green sea turtles. Just beyond the main tortoise feeding area off Baie Laraie is a walking path, part of which is on an elevated boardwalk that leads through eight different varieties of mangrove forests.

The trail, about 4km long, is flanked by towering granite rocks, lofty palms and umbrella-shaped takamaka trees, and the climb, mostly in full sun and high humidity, can be tough for some, so keep well hydrated. Forty-five minutes later you’re wallowing in the cool teal waters of Anse José and all is forgiven. 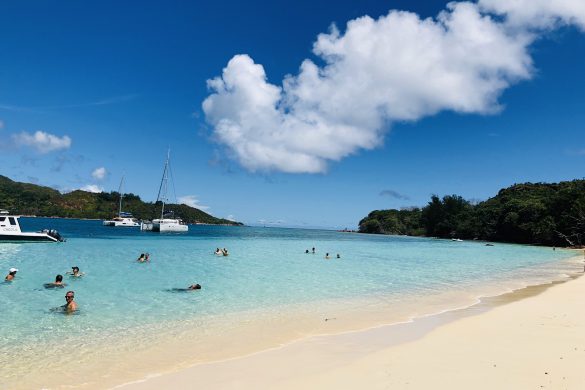 Cousin Island, 2km from Praslin, is an award-winning Special Reserve with a remarkable eco-tourism story. When Birdlife International (BLI) purchased it in 1968, it had been laid waste, again for coconut palms. Fifty years later, the restored vegetation is thriving and is a refuge for several rare and endemic species, some of which, like the Seychelles warbler, have come back from the brink of extinction. Cousin also holds the title as the world’s first carbon-neutral nature reserve.

Over-tourism is an issue here and only a certain number of visitors are allowed ashore each year. The island is a breeding site for a variety of terns and other seabirds and an important nursery for hawksbill turtles. Those planning to visit are collected from their boats in rubber dinghies and steered at speed through the choppy surf and high up onto the beach. After that dramatic arrival, guides then lead small groups through the forest on a 30-minute tour. The creatures on Cousin have no fear of humans and it’s not uncommon for white-tailed tropicbirds to fly extremely low and close to people as they make their way to their nests in the hollows of tree trunks on the ground. It’s a place that belongs to birds and where humans are welcome. Cousin is swampy in parts, which means there are swarms of mosquitos, so make sure every inch of your skin is covered by an eco-friendly repellent and appropriate clothing. 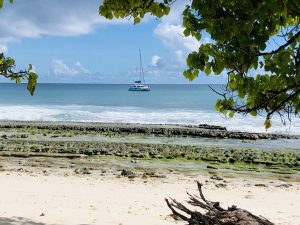 AN ISLAND OF CONTRASTS

La Digue, situated just behind Silhouette, is known as the cycling island. Visitors who aren’t arriving by helicopter disembark in the picturesque harbour and walk straight into the charming village of La Passe. It’s a bustling community with a tourist office, restaurants, beachfront bars, a pharmacy, bottle stores and shops stocking all the essentials. L’Anse Source D’Argent, which is part of the L’Union Estate National Park, has been voted more than once as the most beautiful beach in the world. At Grand Anse, Petite Anse and Anse Coco on the eastern side, the sea is wilder and can be dangerous between April and October when there is a very strong undercurrent. Touring in one of the lumo vintage-style cabs can be fun but the best way to explore La Digue is by bicycle. Kitted out with brightly coloured panniers, bikes are available for hire near the jetty and although mostly creaky, rusty old things (test your brakes before you pedal away), they do the job. There are a few gentle hills to negotiate along the well-established coastal road that runs from La Passe towards Anse Fourmis. If the going gets tough, stop for a tortoise selfie, have a drink at Bikini Bottom Bar or visit the Georges Camille Gallery. The rock pools on this route are a magical, translucent ice blue contrasting with weirdly shaped caramel-coloured boulders that look like dinosaur bones. Twitchers will be glad to know that the endangered black paradise flycatcher is found on this island and can be easily spotted in the taller trees. 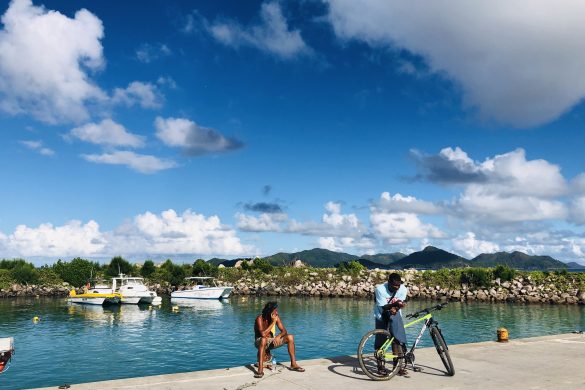 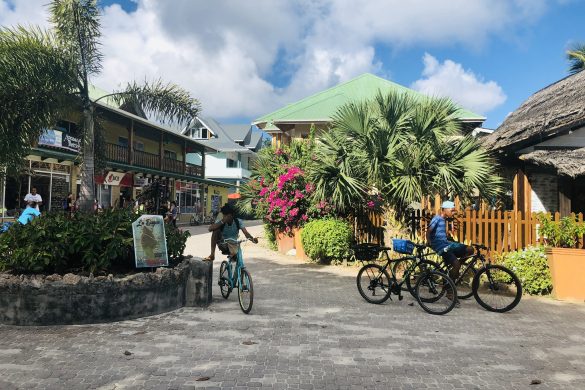 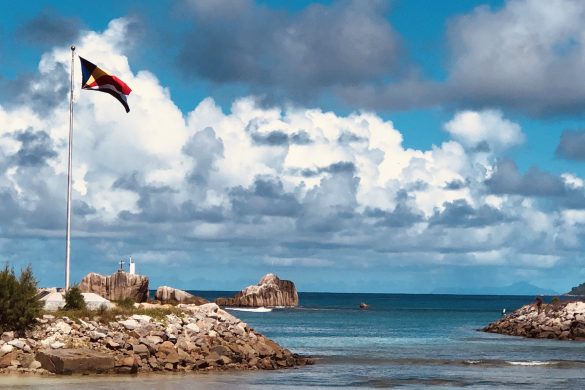 Seychelles is the jewel of the Indian Ocean, hypnotically beautiful, eco-savvy and culturally diverse. As tropical islands go, it just doesn’t get better than that.