The Weekend Wrap-Up 6 January 2020 – Start 1 of the Cape 2 Rio Yacht Race, South African skippers fight for the lead in the Clipper Round the World Race and we follow the WSL CT Qualifiers to China.

The Cape 2 Rio race began with a bang as the first group of boats set sail on Saturday, 4 January 2020.

At 14h00 local time on Saturday 4th January 2020, 13 of the participating Cape2Rio 2020 teams took to the blue and rather calm waters of Table Bay, hoisting their sails in the light SW wind embarking on this adventure of a lifetime. Years of preparation, dreaming and hard work came to fruition for these teams.

Family, friends and enthusiasts gathered in support at the Royal Cape Yacht Club (RCYC) as the teams carried out last minute checks ahead of their departure and for the blessing of the fleet. The ambiance was rich with anticipation, and the crew’s desire to get going was palpable. The fleet headed to the V&A Waterfront for a sail past prior to heading out into Table Bay for the start preparation.

Currently the teams are positioned off the west coast at Elandsbaai, having made slow progress while waiting for stronger southerly winds.

Track their progress and read more about their respective stories, crews and goals at https://cape2rio2020.com/entries-2020/. Better still, connect on Instagram and Facebook and support their significant fundraising efforts.

Here’s some of S+Ls favourite shots from the start: 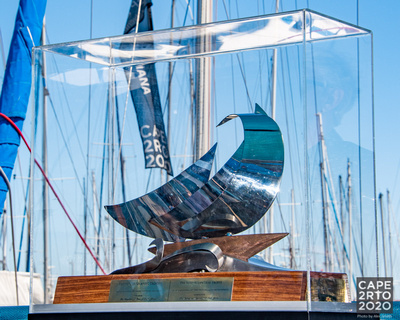 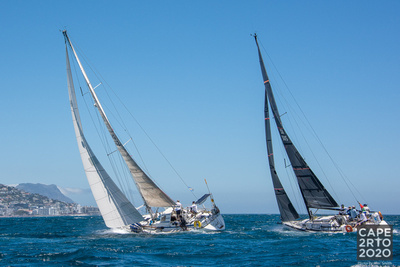 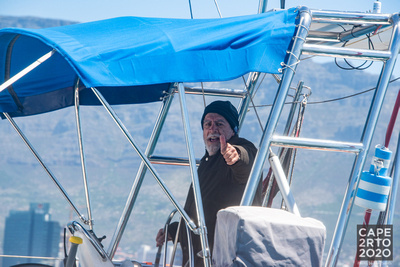 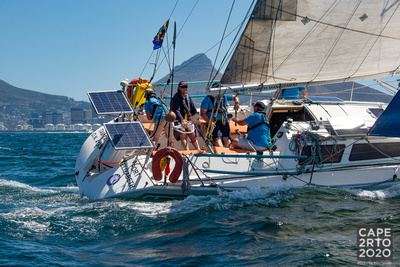 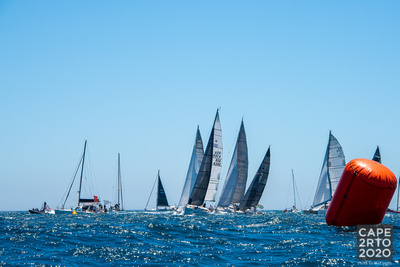 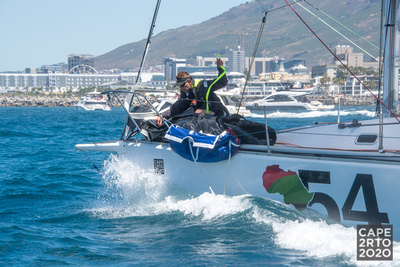 Race 5: The Whitsundays. Racing to the heart of the Great Barrier Reef will be one the crews will remember forever. Known for the anticipated Southerly Busters and unpredictable currents the East Coast has led to some tactical routing decisions. Whilst those closest to shore experience the effects of the east coast’s bushfires providing challenging and saddening conditions, a stark reminder of the devastation taking place so close by.

Now it is time for tactical decisions as the race develops with currently just around 730 nautical miles to go to for the front-runners.

Sailing second-closest to shore is GoToBermuda. South African Skipper David ‘Wavy’ Immelman reported: “We made our way in and out of the current, with Nick and his crew on Zhuhai close on our heels, only to have the wind drop. I felt the temperature change and the air just felt different somehow. I called the crew up and briefed them just in case this was a Southerly Buster (a very strong wind front), but not being able to see the clouds, or anything else for that matter, I thought better safe than sorry. [There was] nothing on the radar either, as you can usually see rain. Well, it paid off, the wind turned and we were hit in 75 knots of true buster style. We were ready, down came the Yankee 1 and in went the third reef, and off we went like a bat out of hell.18 knots of it.”

Currently leading the fleet Zhuhai has since tactically opted to go into Stealth Mode, meaning their position is hidden from the other yachts and the Race Viewer whilst they test their best position to tack.

Further down the fleet in sixth position, Seattle’s AQP, Lyndsay Barnes reflects on the devastating situation effecting those on shore: “We have been under a blanket of smoke at a very high level, but this far offshore we have not had the smell of fire that many of the other teams are reporting. The stress of racing fades into complete insignificance, and none of this really matters in comparison to the battle of man vs nature that is going on all over Australia at present.” 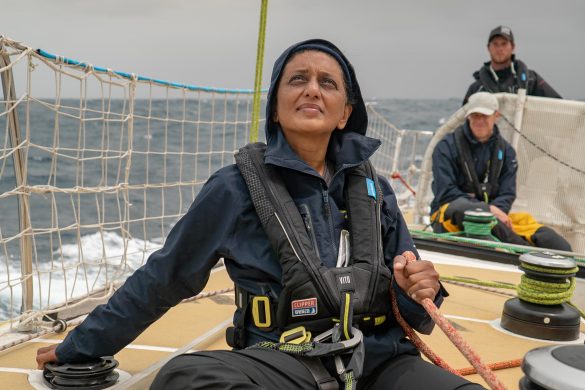 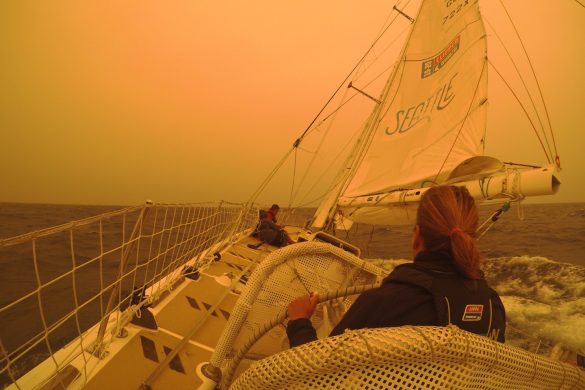 Please note that these are best estimates based on the latest weather and the average speeds of the fleet. Weather and tidal conditions will cause these times to change. Keep an eye on the Race Viewer for where the yachts are now. 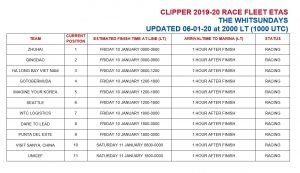 Despite it not really going down during the New Year, we thought it necessary to mention the prestigious event that is the Rolex Sydney Hobart. Kicking off on Boxing Day, a 157 strong fleet headed south towards Tasmania. 2019 celebrated the 75th edition of the race, celebrating a legacy of skippers and crew, big and small boats, and their triumphs and tribulations. This year Matt Allen and his crew on Ichi Ban won on corrected time, while Comanche took their second line honours victory.

Find full results and further information on the entries via their website. 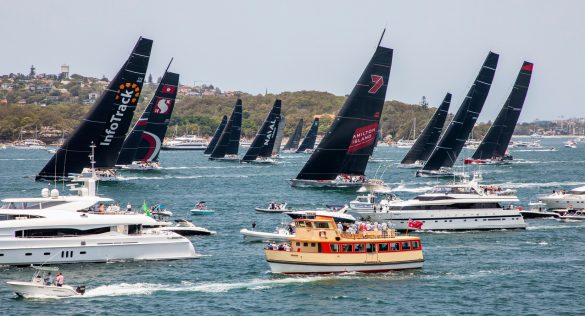 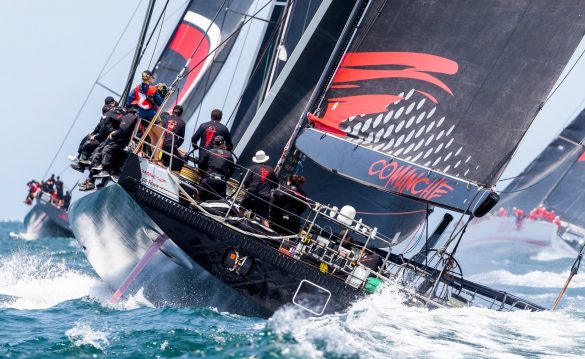 The combined men’s and women’s QS 5,000 event will see over 200 competitors from all around the world, fighting it out for important qualifying points as they look to secure a place on the WSL Championship Tour (CT).
Men’s Contingent Blast Through Early Goings at Corona Open China hosted by Wanning
Competition flurried into action on opening day of the World Surf League (WSL) Qualifying Series (QS) Corona Open China hosted by Wanning, a men’s and women’s QS 5,000-level event, with men’s Round 1 taking centre stage. Two-to-four foot (1 – 2 metre) swell pulsed into Riyue Bay’s left-hand point throughout the day and provided a brilliant canvas for some of the top QS threats on hand. Women’s competition was called off for the day with a likely start when the event resumes.

Qiu Zhuo (CHN) notched a milestone feat for his country as the first Chinese competitor to advance in a major WSL QS event. The 16-year-old edged past Jackson Butler (USA) in the final minutes.“I feel so happy right now and I’m so excited this being the first time WSL has had a big (QS) contest here,” said Zhuo. “I just want to represent my country and it feels good to make it past the first heat. I want to be on the [Championship Tour] when I’m older and it’s something I’ll try my best at.”[WSL Press] 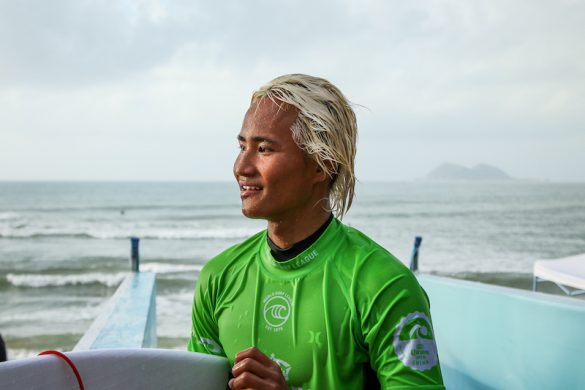 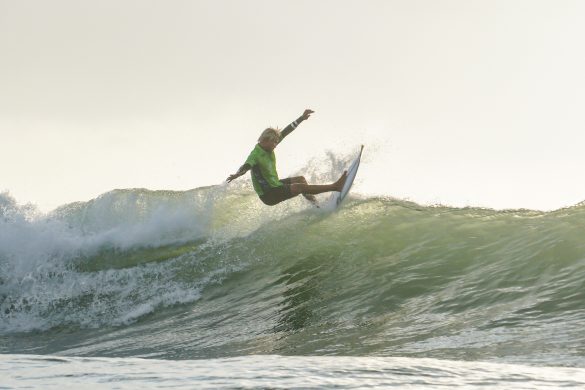 The 2020 Corona Open China hosted by Wanning (Men’s and Women’s) is running from January 6 – 12 and is broadcasting live on www.worldsurfleague.com and on the free WSL App.