4 November 2019 – This Weekend Wrap-Up covers the start of the Hobie 16 Worlds, updates on the Transat Jacques Vabre and Clipper Round the World Race, Ludertiz Speed Challenge and much more. 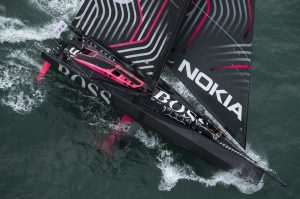 HUGO BOSS at the start of the Transat Jacques Vabre.

On the morning of the 3rd November while Neal McDonald and Alex Thomson were sailing at around 25 knots onboard the new HUGO BOSS, they hit something in the water. This caused significant keel damage, forcing the team to withdraw from the race on what was day 7. This was horribly disappointing for the team, who are now focussed on getting McDonald and Thomson (neither of which not seriously injured) safely to the nearest port.

Clipper Round the World Race – update

Day 11 of Race 3 (Sunday, 3 November) saw some challenges across the fleet making their way to Cape Town in intense weather conditions.

As he looks forward to arriving in his home port, Capetonian Skipper Nick Leggatt on board Zhuhai reports: “This time yesterday we were barreling along in gale force conditions and driving rain, and then just as suddenly, in the day time, the wind switched off and the sun came out. We were in the eye of the gale. Ever since then it has been a frustratingly slow game of trying to creep forward while waiting for the second part of the gale to reach us.”

This race from Punta del Este, Uruguay to Cape Town, South Africa may be one of the shorter legs, however it is known to be fast, furious and a true experience of ocean racing. The fleet are expected to arrive in Cape Town in less than week. You can follow the teams to check ETAs.

The 22nd Hobie 16 Worlds kicked off this weekend on Friday, 1st November at Captiva Island in Florida. The event, running from 1-16 November, will have sailors competing from around the world across three world championship disciplines: Women’s, Youth, and Open, and three additional disciplines: Masters Cup, Grand Masters Cup and Great Grand Masters Cup.

The Hobie 16 Masters, a four-day series, started the champs with great racing this weekend. Eight races have been completed over the past two days, with Darren Smith and Claire Bisgood from Australia currently on top.

The Hobie 16 Grand Masters, Great Grand Masters, Women and Youth races are scheduled to start on 6 November, so keep a close eye on their website for updates. 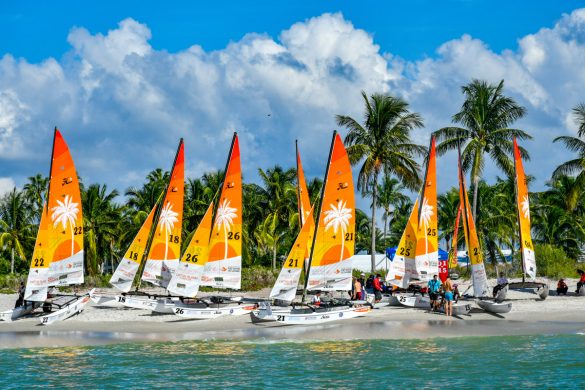 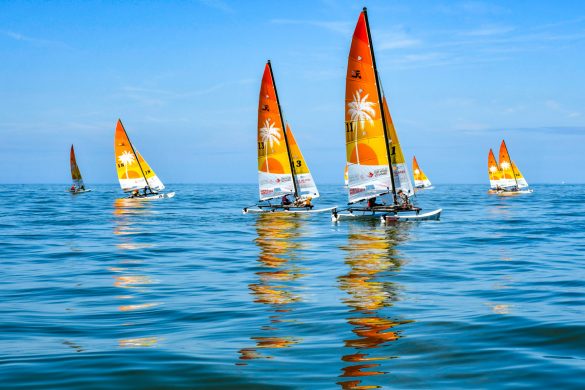 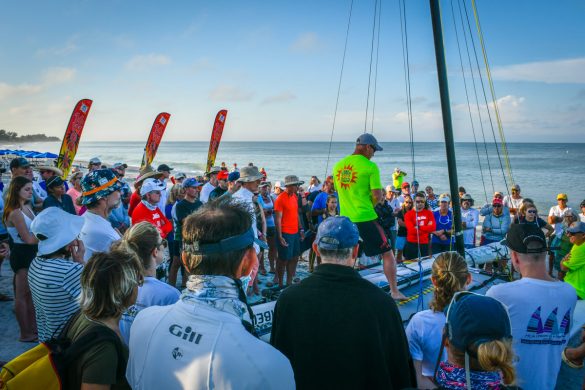 The story of 58ft Maiden is an incredible one. It started when Tracy Edwards decided she wanted to take the first all-women crew around the world. The Maiden’s current round-the-world campaign is aimed at raising awareness and funds for girl’s education and empowerment. The team, newly skippered by Liz Wardley, began the next leg of their 4000+ nautical mile journey through the Panama Canal to Antigua leaving Los Angeles this weekend on 2 November. 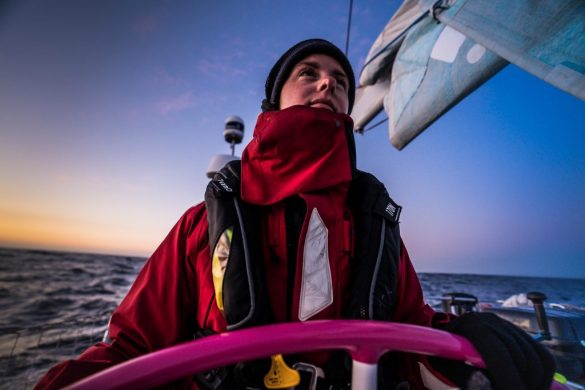 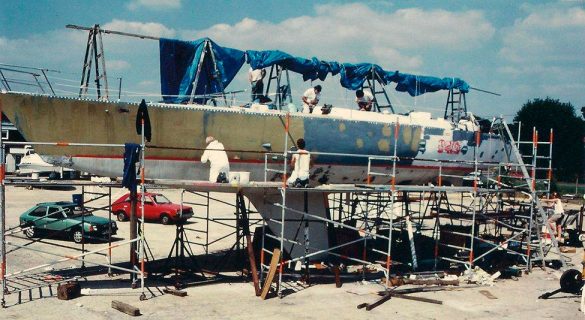 Maiden in 1988 being refitted. 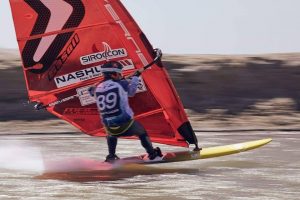 This weekend at the Ludertiz Speed Challenge a record was broken by South African Karo van Tonder. This new female African continent speed record of 43.3 knots average over the 500m course is an incredible achievement!

The days following the record didn’t have as much wind, giving the riders some time to test new gear and settings and have a well-deserved break before trying to push the limits again. Keep an eye on their page to see when conditions are promising for record-breaking again.

South African Davey van Zyl won the Vans Surf Pro hosted at Sunset Beach in Hawaii, becoming the second non-Hawaiian ever to take the title.  His biggest professional win to date, an underdog victory climbing out of a combo situation in the final and pulling ahead of heat frontrunner Ezekiel Lau. 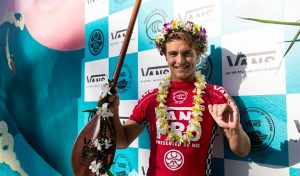 “I can’t believe it, I’m so stoked, I went into the Final just so stoked to have made the Final,” said Van Zyl. “I just wanted to surf and get a few waves, I wasn’t really planning on winning or doing anything crazy. I just wanted to get good scores and good waves. I was a bit nervous at the start, I actually was comboed for pretty much half the heat so to come back at the end was really special.”

Rugby World Cup Japan 2019 – South Africa erupted with pride on Saturday, 2 November as the Springboks triumphed 32-12 over England, winning the World Cup in Japan. For many, this was the most unifying game of rugby since the 1995 World Cup final. This win was made extra special with Siya Kolisi being the first black captain to lead the team to victory. Not only are the Bokke world champions, but this win took the team to the top of the World Rugby Rankings for the first time in 10 years.

GKA Morocco – On the tenth and final day of the GKA Kite World Cup, Dakhla Airton Cozzolino took the headlines yet again with an incredible eight back-to-back heat winning comeback in the men’s Kite-Surf double elimination. In doing so the Cape Verdean has also ensured that he’ll retain his World Championship crown.

In the women’s division, Carla Herrera-Oria also fought bravely through the entire double elimination, facing down five heats and reaching the final for her own re-match against Kirsty Jones. In guaranteeing her second place finish at the event, Carla too has done enough to win her first World Title. 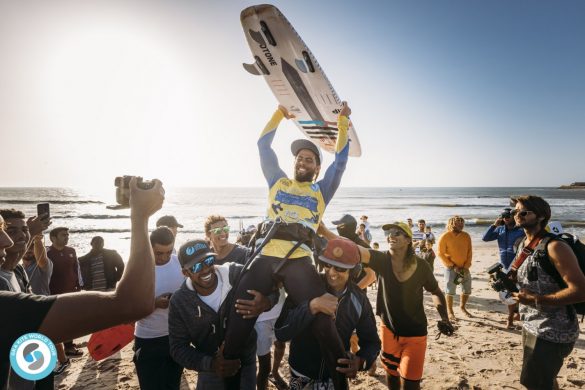 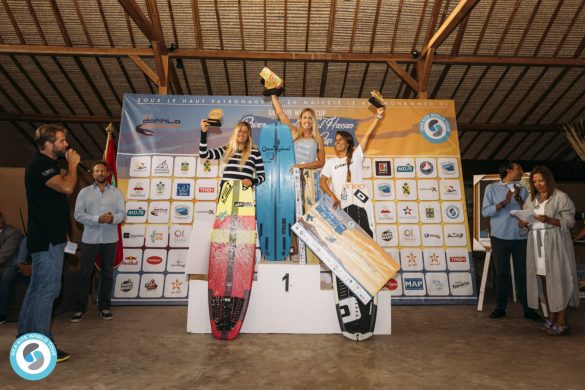 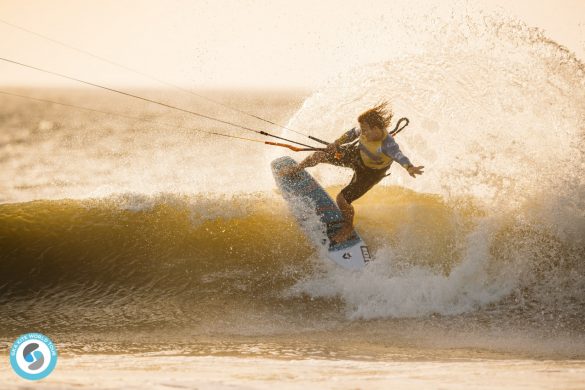 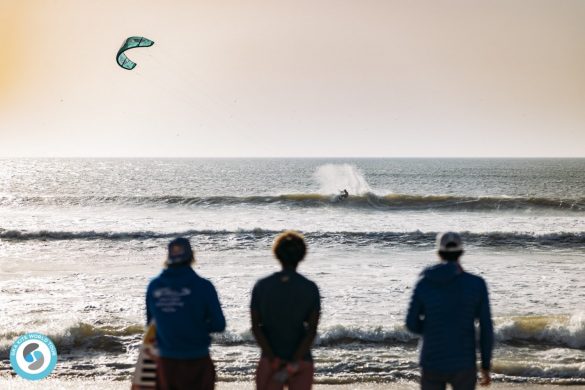 Formula 1 Austin, Texas – Lewis Hamilton took his sixth F1 win at the United States Grand Prix. This win has made him the second most successful F1 driver of all time behind Michael Schumacher, who has won seven times.