The Pammenter brothers have long been involved in fast-paced racing and the world of yachting, each doing it in their own way. Sail + Leisure caught up with them in their “down time” to find out what keeps them coming back for more.     We first chatted to Mike as he looked back on his sailing career and now we chat to Shaun who has had a varied sporting career, having pursued both rugby and sailing professionally.

When Shaun was 13 years old and Mike was 10, their father John bought a Royal Cape One-Design called Foxy Lady with friends. The brothers’ sailing careers began on this 29-footer with Shaun only getting into sailing Dabbies from about the age of 14. He competed in two Youth National Championships and finished mid-fleet. ‘I don’t have the youth sailing credentials that a lot of the guys sailing today have. And in Durban there wasn’t as much going on as there was in Cape Town or on the Vaal Dam, but Mike and I still loved sailing. Tearing around on Dabbies and making lifelong friendships while doing it is probably why we both kept at it. Later, sailing Lasers in Durban meant sailing against a handful of boats, so playing club rugby each weekend was more appealing.’

Shaun played for Border Under-21 and later the Natal B side in the Vodacom Cup. He stopped
playing when he joined Team Shosholoza for the America’s Cup in 2007, later returning to play Vodacom Cup rugby. He then went on to play for Cornish Pirates in the RFU Greene King IPA Rugby Championship in the UK but a shoulder injury prevented him from finishing the 2009-10 season. That season final saw the Pirates lose to Exeter Chiefs, and with that the team lost out on promotion to the Premiership Rugby Cup. Although Shaun was offered a contract with Pirates for the following season, he decided to return to sailing. ‘I made the decision to stop playing rugby for a number of reasons. In hindsight I regret not having played another two or so seasons. I was really enjoying it,’ he says.

Shaun’s sailing credentials include navigating some Transatlantic, Fastnet and Rolex Sydney Hobart Yacht races, and competing in the 52 Super Series this year. ‘The racing’s super close with even small errors costing three or four places in some cases,’ he says. He has also raced on some notable superyachts like Highland Fling and the J-Class Velsheda.

‘You can’t really compare such a variety of boats and events, but the highlight would have to be the America’s Cup. It’s the pinnacle of inshore racing and considered the Formula 1 of sailing. You’re in a team, and there’s a lot going on as you try to get the most out of the boat and its systems, and fine tuning crew manoeuvres. It takes years of dedication by everyone and a huge team effort.’ Shaun has been sailing on the South African TP52 Phoenix this year, starting with training regattas in Cape Town before competing in the Super Series in Europe this season. When asked further about the Transatlantic Races, he reflects on his long road working towards becoming a navigator. ‘In the beginning it was slow going. I started by studying navigation software given to me by Marc Largesse. I travelled to his home in France where he gave up two days of his time to teach me and help me prepare for my first Transatlantic Race as a navigator. It’s something he probably regrets to this day because I still harass him with questions!

‘I’ve been very fortunate to have so much help along the way from sailors, electronics engineers, weather gurus, and some of the best navigators around. Then comes the learning through experience, sometimes through humbling mistakes, but all valuable. Eventually you get opportunities that come with the responsibility of navigating a boat across the Atlantic as fast as possible while always keeping boat and crew safety in mind.’ Shaun says top-level navigators have a mix of three skill sets – they are good sailors with an understanding of what a tactician wants to know and how to provide that information; they have some weather knowledge (particularly useful for offshore racing); and an understanding of the electronics systems and navigation software. ‘For these reasons I studied meteorology. When not sailing I work for Osprey Technical as an electronics engineer to help develop the skills for navigating.’ 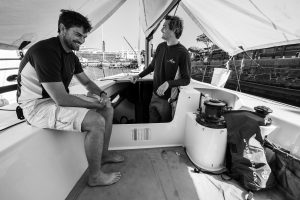 He and Mike sometimes compete against each other. Last year Shaun sailed on Phoenix, racing against Mike on Highland  Fling but with Phoenix staying in Europe this season they will be racing together on Fling in Cape Town. The brothers have no issues with sibling rivalry. ‘We have always supported each other. When we race against each other it’s just about trying to make sure your boat wins. After racing, everyone has a beer and a laugh.’

Beauty in the Bush | Botswana