Leg 2 of The Ocean Race Europe finished in Alicante, Spain in a nail-biting finish on Wednesday. It was the culmination of three days of tight racing between the 12 international crews since leaving Cascais, Portugal on Sunday afternoon.

The second leg of the inaugural edition of the three stage European event proved to be a challenging affair with the professional ocean racing teams facing a wide range of conditions along the 700-nautical mile (nm) / 1,296-kilometre (km) course, finishing in Alicante, Spain. Alicante is the home port of The Ocean Race and the start venue for the round the world race in October 2022.

Conditions on the leg ranged from fast downwind sailing in the Atlantic on the first day and night along the Portuguese coast, to battling gale-force headwinds in the Gibraltar Strait on day two. The final night saw light wind and ghosting conditions in the Mediterranean Sea.

The VO65 one-design yachts proved to be versatile across all these weather conditions, with all seven making it to Alicante by midday local time Wednesday, around 11nm /20 km ahead of the five IMOCA 60s.

Before dawn on the last day the two boats drifted the final miles to Alicante under the cover of darkness and on mirror-flat seas. The Portuguese yacht crossed the line just before sunrise at 0336 UTC / 0536 CEST – a little under half an hour ahead of the Dutch team.

Although the final 24 hours of close quarters match racing had been nerve-wracking for the two sleep-deprived crews, both skippers admitted the sailors thrived on the intensity of the racing.

“It was a long fight with Akzo,” said Yoann Richomme (FRA), skipper of the Mirpuri Foundation crew. “We managed to overtake them yesterday afternoon and then managed to hang on to our lead after that, which was very tough. We got very little sleep; the whole crew is very tired now. It was a full-on spinnaker run until the south of Portugal, then some strong upwind stuff through Gibraltar, and then straight into some light wind sailing. We were doing a manoeuvre – changing sails or something – every hour, so it was hard to get any rest.” 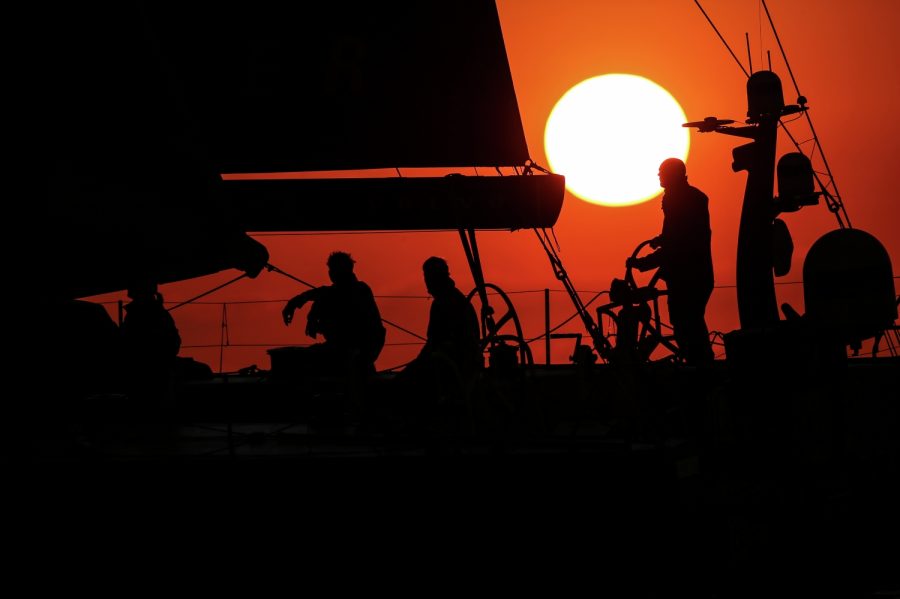 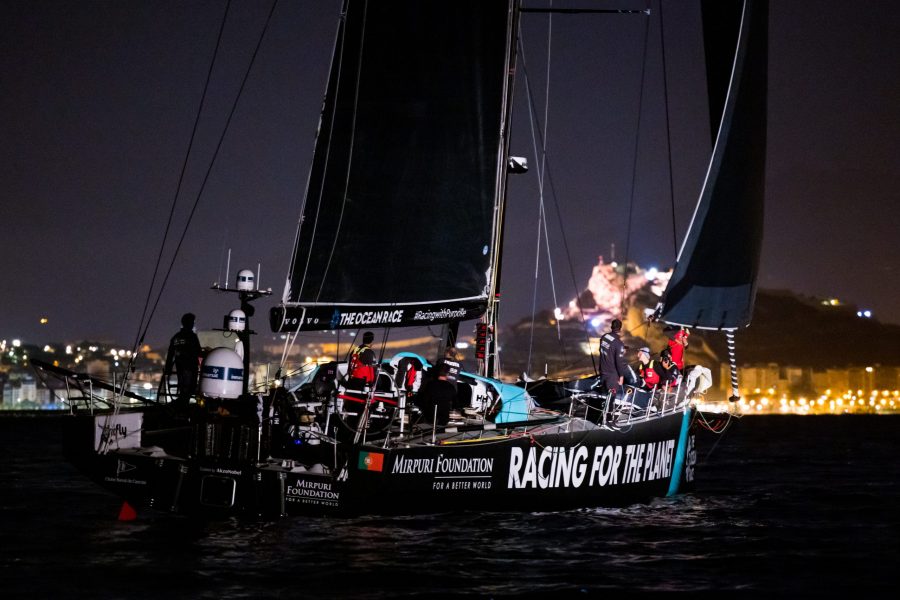 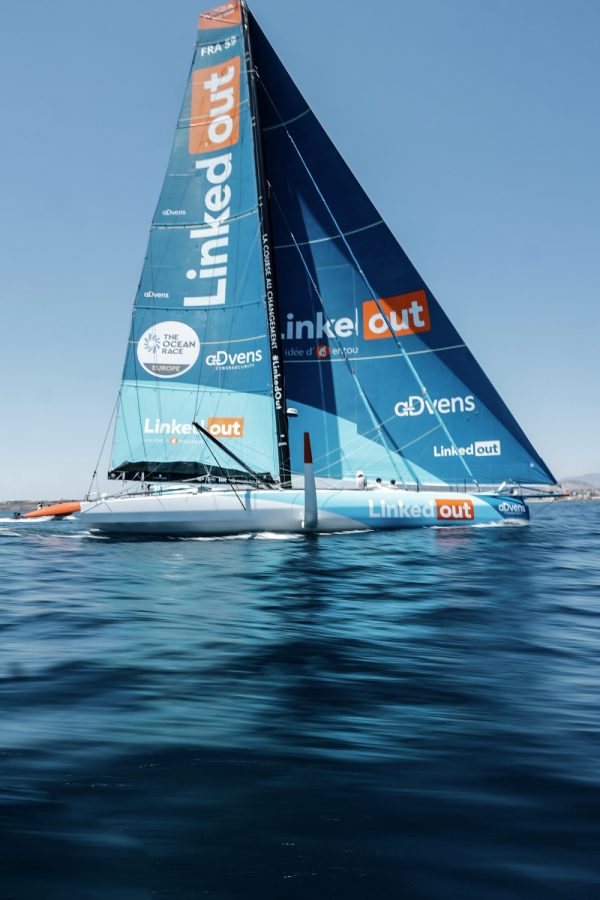 Both Richomme and his rival skipper Chris Nicholson on AkzoNobel Ocean Racing admitted to being relieved to finish the leg ahead of the chasing pack – unlike on leg one when these two crews led virtually all the way from Lorient before cruelly being overtaken in drifting conditions in the final miles to Cascais.

“You knew at any stage on this last day that it could end badly,” Nicholson said on the pontoon today.

“We have been chasing Mirpuri for a long time – we were in the lead for a little bit of it – but there were so many occasions where things went good, and then things went bad. We got to within a mile of these guys at the finish, when they had stretched it out to five miles a few hours before hand. You learn, you just never, never give up.”

The leg two results see these two teams top the overall VO65 standings. Both are on 11 points, but Mirpuri Foundation Racing Team claims first place by virtue of the tie-break rules, which favour the most recent result.

The third spot on the overall podium goes to Sailing Poland who led the fleet out of the Gibraltar Strait but struggled for speed in the lighter winds.

They came from behind to snatch third place on leg two by overtaking both Erik Brockmann’s Viva México and Simeon Tienpont’s Childhood I (NED) in the final miles to the finish.

“Childhood and the Mexicans had a little private battle, and that was our chance to come up on the right of them and then we passed them,” Bekking said, describing the finish. “We led the leg for a long time, especially in the windy part. So I think we deserve third place.”

A final challenge in the IMOCA fleet

The leg two results have created a three-way tie in the IMOCA 60s, with LinkedOut, Offshore Team Germany, and 11th Hour Racing Team, filling the respective podium positions on Leg 2 – all tied on nine points apiece.

“It’s cool that we’re all on equal points – anything can happen! It’s not going to be easy,” said LinkedOut sailor Clarisse Clemer.

Analysing the Leg 2 performance, she noted: “We had a good start, we were fast and we managed to go to the right places on the water and so it all worked out. We didn’t expect to have no wind at times during this last night, so we were a bit nervous, and in the end it was tense and close, there was a bit of pressure on board.”

The French team was just able to hold off a hard challenge from Offshore Team Germany, the only one of the five IMOCAs to be in a non-foiling configuration. With an older generation boat and his newly formed crew, German skipper Robert Stanjek, says he’s pleased with the results as his team is still on the steepest part of the learning curve.

“We are still learning heaps about the boat,” Stanjek said. “Even in this leg we were faced with racing without instruments through the night, and then the tricky light wind conditions, so it’s a huge learning curve. And of course we are also learning about our team and the different skills we bring to the table so I’m happy with where we are.” 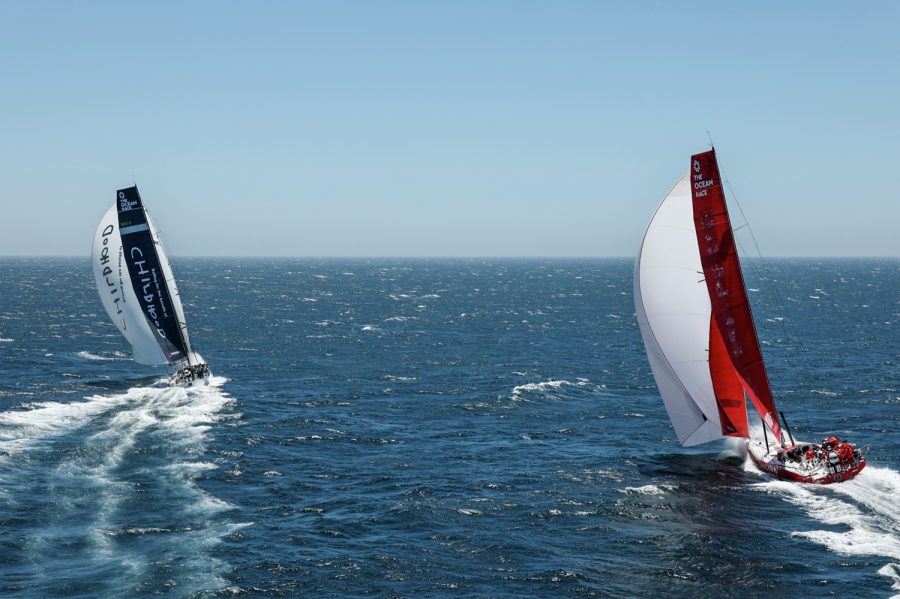 Second Leg of The Ocean Race Europe, from Cascais, Portugal, to Alicante, Spain. 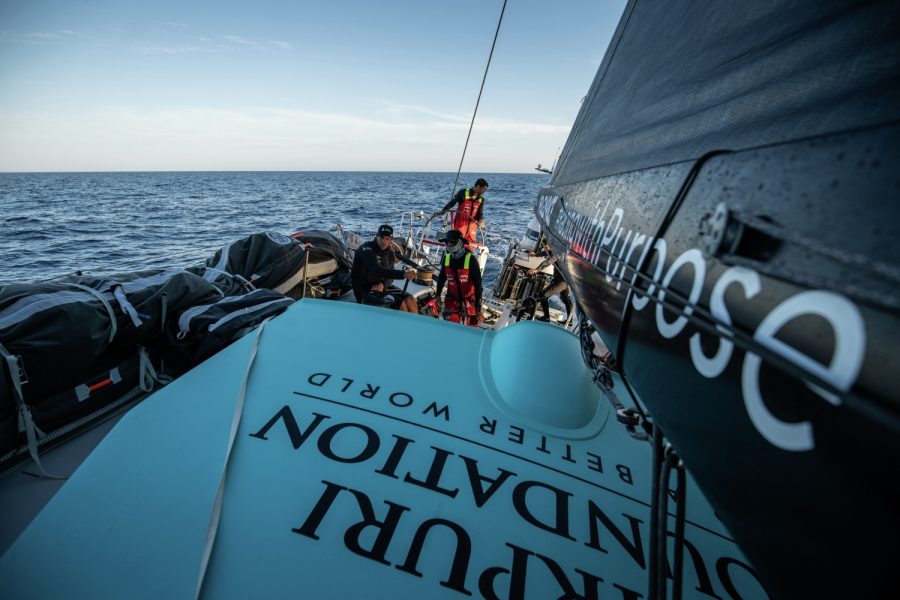 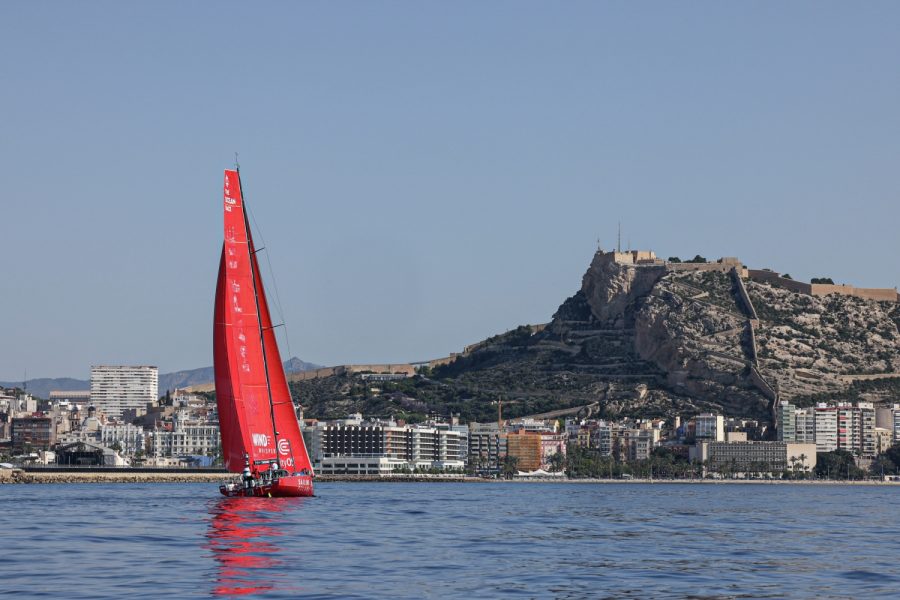 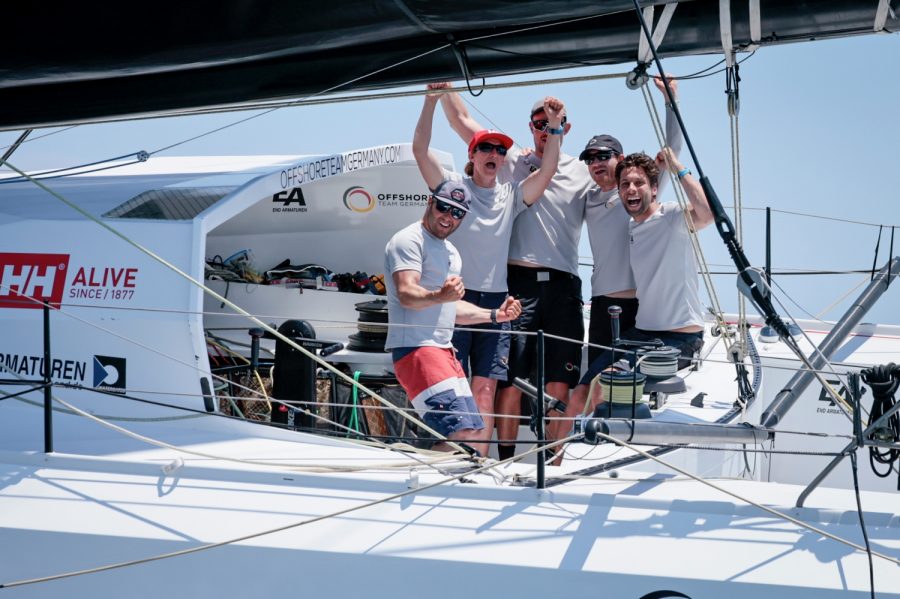 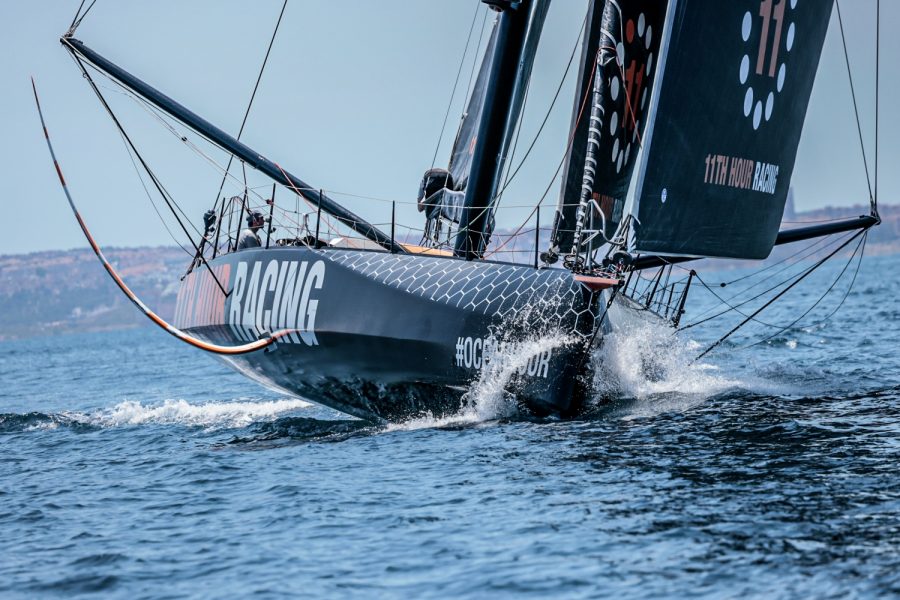 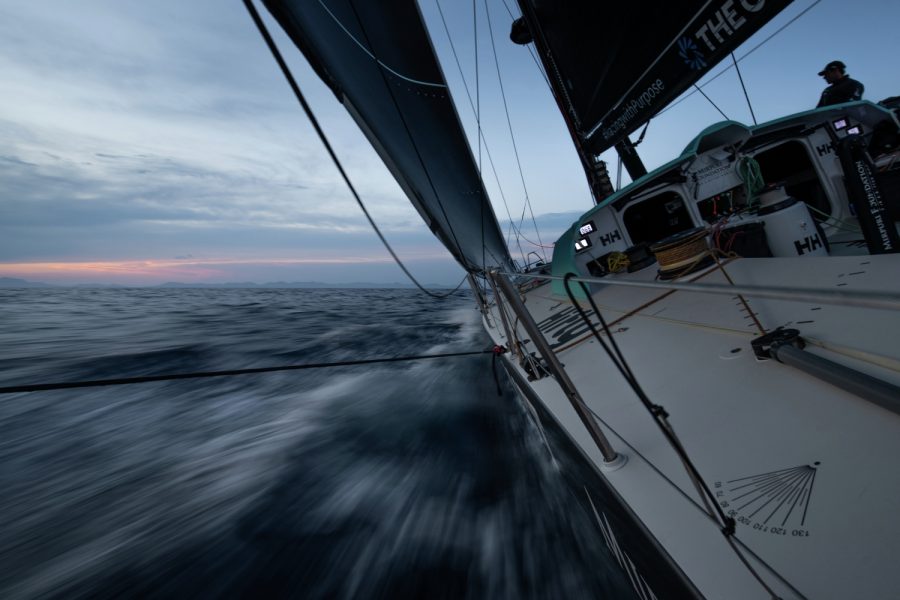 Getting ready for Leg 3

Having arrived in Alicante a full day ahead of the ETA predicted by weather models before the fleet left Cascais, the teams now have some extra downtime to rest their bodies and repair their boats before the start of the third and final leg of The Ocean Race Europe to Genova, Italy on Sunday June 13.

With such a close leaderboard at the top of both the IMOCA and VO65 classes there is a lot at stake on leg three, with the reasonable possibility that the final results could be decided by the outcome of the coastal race in Genova, which assigns bonus points to the top three finishers in each class.

** The Race Committee is checking Viva Mexico for a possible infringement of the TSS (traffic separation scheme), which may have an impact on their score in Leg Two.

** The Race Committee is checking Viva Mexico for a possible infringement of the TSS (traffic separation scheme), which may have an impact on their score in Leg Two.

Watch the start of the Ocean Race Europe