The Lineup with Dave Prodan breaks things down with influential figures from all across the surfing landscape. Hear their behind-the-scenes stories and unfiltered opinions to get a deeper sense of who they are and how they’ve influenced the sport and culture of surfing.

In the first half of this two-part podcast series, 3x World Champ and fastest-surfer-alive Mick Fanning lets loose about his evolution from scrawny Gold Coast grom to a competitive machine, his infamous encounter and new stance on sharks five years later, and his decades-long relationship with Rip Curl.

In the second half of this two-part series, Mick returns to talk about going head to head with prime Kelly Slater and Andy Irons, the physical gap between the QS and CT, 2020 season predictions and the possibility of returning to the tour in the future. 2020 World Surf League. All Rights Reserved. 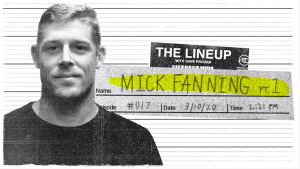