The dramatic Transat Jacques Vabre has come to an end. Boats have now crossed the finish line, some teams are delighted with their results and others not so much. This race is not for the faint-hearted. Even so the speeds that the Ultime Trimarans have achieved, are insane. Watch the incredible footage taken of these majestic boats during the race. We can’t believe the noise the foils make – imagine living with that sound for days on end?

This class was won by the French duo of Franck Cammas and Charles Caudrelier on Maxi Edmond de Rothschild. 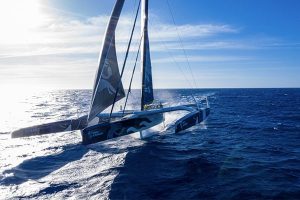 The IMOCA class was won by LinkedOut sailed by another French duo – Thomas Ruyant Morgan Lagravière. They held their week long lead over Charlie Dalin and Paul Meilhat on Apivia.

Read the dramatic story of Kevin Escoffier’s rescue during the 2020 Vendée Globe race.