Croatia is definately on our list of cruising destinations. So this hot-list of CN Traveller’s Best Croatian islands to visit is a must-have. Whether we’ll be seeking out the big-hitting names or the lesser-known slips of land for a crowd-free holiday and lazy contentment, these insider tips and gems of info will be invaluable to us. 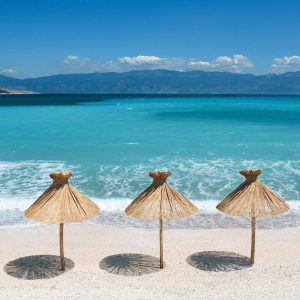 Romanesque churches, walled monasteries, lush vineyards and pretty fishing villages. Joined to the mainland by an impressive bridge, Krk draws visitors from northern Croatia and beyond with its superb konobe (taverns) serving local specialities such as šurlice (handmade pasta) and Kvarner shrimps – reserve a table at Bracera in Malinska, or Rivica in Njivice. Walk or cycle hiking routes that follow time-worn donkey paths over fertile farmland and barren rocky slopes, stopping to explore the underground caverns of Biserujka Cave, sample Žlahtina white wine in the hill village of Vrbnik and swim at Baška.

Insider’s tip: Call at family-run Utla near Malinska to taste their extra-virgin olive oils made from local Plominka olives

Croatia‘s trendiest island destination, Hvar Town sprawls around a sheltered harbour packed with yachts, a vast paved piazza with a baroque cathedral at its centre. Stroll along the palm-lined seafront promenade and up to the hilltop castle, then wander through cobbled alleys, packed with rustic-chic seafood restaurants (think lobster, champagne, and lavender ice cream), cocktail bars and boutiques stocking handmade jewellery and designer swimwear. Beyond the capital, the rural interior is a haze of lavender fields and vineyards – call at the Tomić winery in Jelsa to taste wines made from local grape varieties Bogdanuša, Pošip and Plavac Mali.

Insider’s tip: For authentic home cooking, visit Konoba Lambik in Milna with tables on a stone terrace in an olive grove 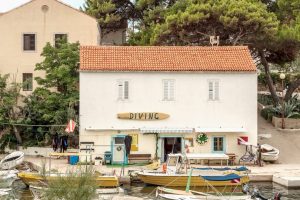 Overlooked by everyone from the Romans to tourists, Dugi Otok has space and silence to spare; both precious commodities in high summer. Its name means ‘long island’ in Croatian, and while itmeasures 45km in length, it’s only 4km at its widest point. Hilltop hamlets like Dragove shimmer in the heat haze like watercolours, while fishing villages such as Sali and Božava are bleached by a lazy sun. There are cliff-edge panoramas of empty Adriatic in the southern Telašćica Nature Park and white-pebble heaven on the lovely Saharun beach with its warm, shallow waters. Only later do you realise what’s missing: traffic, people and noise.

Insider’s tip: Dugi Otok is served by ferry and catamaran from Zadar to Božava, Brbinj, Sali and Zaglav. It’s also possible to visit as a one-day excursion from Zadar. 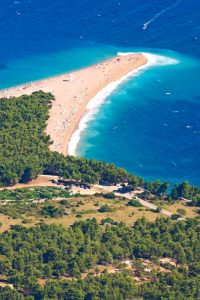 Brač is blessed with the magnificent Zlatni Rat beach in the harbour town of Bol, Croatia’s top windsurfing destination. The island appeals to adventurous types with its excellent water-sports facilities and well-marked hiking and cycling paths. Behind Bol rises Vidova Gora (780m), the highest point on the Croatian islands – climb to the top for astounding views. Brač’s hilly interior supports sheep farming – dine on lamb, roasted whole on a spit, at the lovely Kaštil Gospodnetić in Dol – while the island’s quarries have generated a population of skilled sculptors and you can visit the Stonemasonry School in Pušišća to see some of their work. 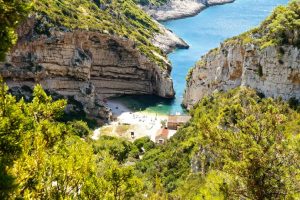 Rising from the sparkling Adriatic, Croatia’s most distant island is visited mainly by yachters, who moor up in Vis Town to feast on fresh fish at Villa Kaliopa ( Vladimira Nazora 34; +385 91 271 1755) or Pojoda (Don Cvjetka Marasovića 8; +385 21 711 575), or venture inland to Roki’s (Plisko Poje 17; +385 98 303 483) for octopus slow-cooked under a peka (a metal domed-lid pot, buried under glowing embers). The Ancient Greeks settled Vis in the 4th century BC, attracted by fertile fields and sheltered bays, and under Yugoslavian rule it was a military naval base, closed to foreigners. Relative isolation has kept commercialism at bay, so the bounty of, local produce served at the island’s many tiny family restaurants is mostly organic. 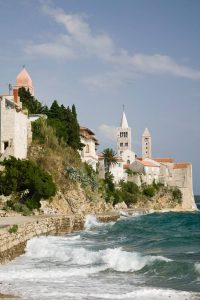 Christened Felix Arba, ‘Happy Rab’, by the Romans, the greenest island in the Kvarner Gulf is a place of pinch-me beauty. Viewed from the sea, Rab Town has the look of a grand medieval galleon built of pale stone, with narrow, steep staircases in place of rigging and four elegant bell-towers for masts. A warren of terracotta-roofed mansions and Romanesque churches, its cobbled alleys are lit by flickering candles come nightfall. And the island’s northern coast, near Lopar, is laced with sandy coves, a rarity in Croatia.

Insider’s tip: Be sure to try Rapska torta, an almond cake unique to the island and said to have first been created when Pope Alexander III visited Rab in 1177. 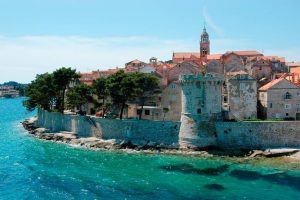 Korčula town, sitting compact on a tiny medieval-walled peninsula, reveals stone stairways, noble palazzi and a Gothic-Renaissance cathedral – seen from the sea, it has hardly changed since its most famous citizen, Marco Polo (said to have been born here), embarked on his voyages to the Orient. At dusk, watch a performance of the moreška sword dance, then head into the hills clad with pine woods, vineyards and olive groves, to Konoba Mahaor Konoba Mate, two rustic agrotourism eateries serving island specialities made from home produce. To sample the local white, Pošip, visit the welcoming family-run Toreta Winery in Smokvica.

Combine urban culture and island escapism (as local nobles did in the 17th century, when they built summer villas here), by visiting Šipan (population 436), one of the Elafiti islets, connected to Dubrovnik’s Gruž port by ferry and catamaran. Šipan’s two main settlements, Suđurađ (on the east coast) and Šipanska Luka (on the west), both have tumbledown limestone cottages and villas lining sheltered bays filled with fishing boats and yachts. They’re connected by a 5km rough track – hire a bike and cycle across the islet, past olive groves and orchards of orange, lemon, fig and carob. 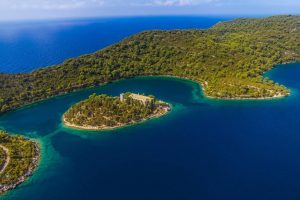 Homer eulogised this wave-washed island of Aleppo pine and holm oak in his Odyssey, and the World Wide Fund for Nature has named it among the last paradises in the Mediterranean. Mljet’s northern third encompasses Mljet National Park, where two interconnected turquoise saltwater lakes are set amid dense woodland. Pomena, the entrance to the park, is just 80 minutes from Dubrovnik by catamaran. Climb up Montokuc for a view of aromatic pines cascading down to the silver-blue Adriatic, or hire a bike and peddle round Veliko Jezero (Big Lake) – in the middle rises a tiny islet, capped by a 12th-century Benedictine monastery, which you can visit by boat. 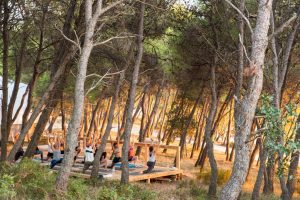 An idyllic islet devoted entirely to glamping, Obonjan is served by private shuttle boat from Šibenik. It opened in 2016, and can host up to 700 glampers in its wooden forest lodges and canvas bell-tents under towering pines. There’s a beach with sunbeds, straw parasols, DJ music, sea kayaks and SUPs; a spa offering holistic treatments; yoga and meditation classes; an outdoor pool; a stone amphitheatre for concerts; and several eating options, including pizza and Sri Lankan street food. It’s popular with hipsters and the concept is great but Obonjan’s eco-credentials could be improved – after all, who needs air-conditioning when you’re camping?

Insider’s tip: While in Šibenik, be sure to explore the old town, with its Unesco-listed cathedral and a number of sturdy hillside fortresses. 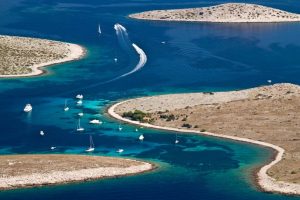 Incomparable to any other form of transport in Dalmatia, sailing is an absolute must for exploring the pristine waters of Kornati National Park. Encompassing 89 wild, rocky largely uninhabited islands, islets and reefs, it’s named after the largest, sage-scented Kornat. Most visitors arrive by private yacht, and come here to drop anchor in one of its sheltered bays (several host simple waterside restaurants), and sunbathe, snooze and snorkel in a blissful blurry blue of endless sea and sky. While looking up, you might even spot rare peregrine falcons. 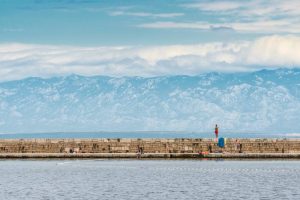 The main town, Mali Lošinj, sits at the end of a long narrow bay on this self-titled ‘island of vitality’. Once a busy shipyard filled with merchant vessels, its moorings are now home to yachts and excursion boats overlooked by 19th-century villas with gracious gardens, some now boutique hotels. Lošinj’s natural attractions include the Aromatic Garden planted with lavender, sage, rosemary and other Mediterranean shrubs, and dolphin watching trips organised by the Blue World Institute, while the Apoxyomenos Museum displays an Ancient Greek bronze sculpture of an athlete, discovered nearby on the sea bed in 1996. 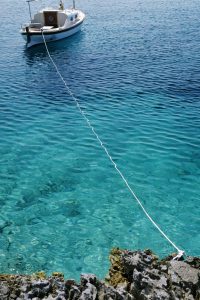 Southwest of Hvar Town (served by taxi-boat), the Pakleni archipelago is a scattering of islets covered in pine woods and sheltered coves, where yachters drop anchor to swim and snooze. The largest, Sveti Klement, is a real back-to-nature escape, with rough footpaths leading through lush Mediterranean vegetation to secluded pebble beaches, several overlooked by seasonal waterside restaurants and cafés. Best of all is Palmižana, an overgrown botanical garden of pines, palms, mimosa, lilies and fragrant herbs, plus a dozen quirky villas and bungalows – the owner, Dagmar, is a contemporary art collector, and her paintings adorn their boldly coloured walls.

Insider’s tip: There’s a small general store in the ACI sailing marina on Sveti Klement, where you can buy basics such as bottled water, bread, coffee and milk. 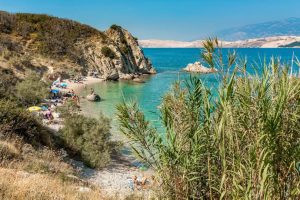 Pag with its bare, pale-pink hills, a landscape as silent and magical as any desert, is unique among the green-sloped Dalmatian islands. It was stripped of its forests by the Venetian Republic, to provide timbers for their galleons. Today, beaten by the harsh bura (northeast wind), it’s linked to the mainland by a road bridge. Drive through the rocky moonscape to see hardy sheep grazing wild rosemary, and dine on Paški sir (Pag sheep’s cheese) and juicy roast lamb. Through summer, suntanned revellers attend electronic music festivals at Zrće beach, and holidaymakers visit Pag Town with its salt pans and lace makers.

Insider’s tip: Book a dairy tour with cheese-tasting at Gligora in Kolan, then buy rounds of cheese) direct from their farm shop. 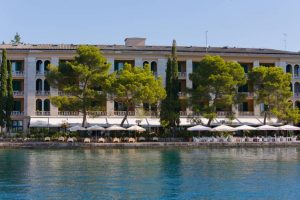 Elizabeth Taylor, Richard Burton and Sophia Loren were among the glamorous guests entertained by Yugoslav President Tito on the islands of Veliki Brijuni, his beloved private summer retreat from 1945 to 1980. Veliki Brijun is the largest of 14 pine-scented islets within Brijuni National Park, and its beautifully maintained parkland reveals Roman archaeological remains. It’s also home to a number of exotic animals such as elephants, llamas, zebras and ostriches (given to Tito as gifts by visiting dignitaries from South America, Africa and Asia), as well as deer and peacocks. It’s small enough to do some exploring on foot or there are golf buggies for rent, and a 3-star hotel offers overnight accommodation.

For more inspiration see their guide to the best beaches in Croatia.