The 23rd edition of Europe’s longest-running superyacht regatta kicked off yesterday with the bay off Palma delivering incredible racing conditions.

Class A lead the way, Nilaya followed off the starting blocks by Win Win and the equally high-performance Open Season in what looks set to be a hard-fought class contest. At the finish the start order was reversed, but as Superyacht Cup regulars know, nothing is decided until the ORC handicap system has worked its magic. Once the ratings were applied, the winner was suitably named Win Win ahead of Open Season. “It’s very exciting to be back again for the fourth year in a row, and we are just trying to keep up the standard and repeat our performance this year,” said skipper Ryan Taylor. 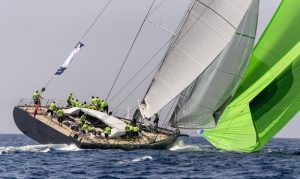 Class B saw the closest contest, with Velsheda getting off to a winning start in defence of her 2018 SYC title – but only by 15 seconds from her J-Class compatriot Topaz. It’s a tight tussle relished by Topaz’s helmsman Peter Holmberg: ‘It’s always really close between us and we love the fact that we start together – we play fair but we play hard.’

It was a close run in Class C too, with the top three boats separated by just 37 seconds on corrected time. First time SYC participant Huckleberry edged out the Spirit of Tradition yawl Bequia to take the narrow win, with the Hoek Design modern classic Kealoha taking the last spot on the podium. The 52m schooner Meteor – the largest vessel at this year’s Cup – came home fourth. 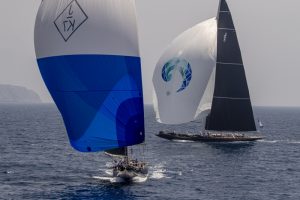 S+L contributor Inge Schabort reports from the front row on the action.

The golden Mediterranean sun rose from behind Military Hill, warming up Palma Bay, in preparation for Day 1: The Pantaenius Yacht Insurance Race.

Today was J-Class day as my eye was caught and my soul was excited by the magnificence of the J-Class boats. There are only two of these boats competing in the 2019 Superyacht Cup Palma – Topaz and Velsheda, in Class B. These classic vessels were originally built around the early 1930’s and interestingly they were raced and helmed by their respective owners and crewed by fishermen during the fishing off season, a very curious combination which made good sense during that time. Topaz is based on a 1935 Frank C Paine design, completed by Hoek Design in 2015 by Holland Jachtbouw, skippered by Peter Holmberg for this event. Velsheda, the 1933 classic, was designed and built by Camper and Nicholsons and being the defending champion, under pressure to hold her title.

Racing started with a fairly brisk breeze: 15 knots from the South West and the J-Class started together (the other boats, for the purpose of safety, start within 2 intervals of each other).  The boats finished in a dying breeze of about 8 knots and after corrected time the winner was Velsheda, very narrowly beating Topaz by 15 seconds. It was impressive and super to watch.

Some exciting news revealed last night is that the J-Class will be competing over a three week period in the weeks leading up to the America’s Cup in Auckland, New Zealand in 2021. How exciting for the followers of yachting in New Zealand and what a great added bonus for those thinking of travelling to New Zealand with their eye on the racing during that period of time! It’s fantastic that a boat with such a grand and old design still makes her presence relevant and exciting.

In true Superyacht Cup style the early evening was laden with cheerful chatter, paella and some good live music during the Southern Spars Happy Hour.

Tomorrow my interest will be focused on following the duel between Win Win and Open Season, both being crewed with some South Africans two of whom hold significant positions; Mark Saddler as tactician on Win-Win and Marc Lagesse on Open Season as navigator.  Today Win Win beat Open Season by around 3 minutes and so tomorrow is game on in “The Battle of the Japies”.

Check out all the highlights from Day 1 in Palma Bay and find results here.

Racing at the Superyacht Cup Palma continues till Sat,22nd June, and will be followed by the Marinepool Paddle Board Challenge where the crews can continue their friendly rivalry.