The first Test Event for the Star Sailors League (SSL) Gold Cup was hosted by the Cercle de la Voile Grandson on beautiful Lake Neuchatel in the Swiss canton of Vaud from the 15th to the 19th of September. And Sailing League (SSL) Team South Africa won the inaugural Test Event! The SSL Gold Cup was created to promote and position sailing as a spectator sport with a truly national identity. Billed as the “Football World Cup in Sailing” the event did exactly what it set out to do.

In true SA-style, SSL Team South Africa sailed under the name Team UBUNTU – living up to the true spirit of their name. They finished 2,4,1,1,2 in the eliminator series against Tahiti, Turkey, and France, and then achieved a hard-fought victory in the final against Thailand, Ukraine and Malaysia. 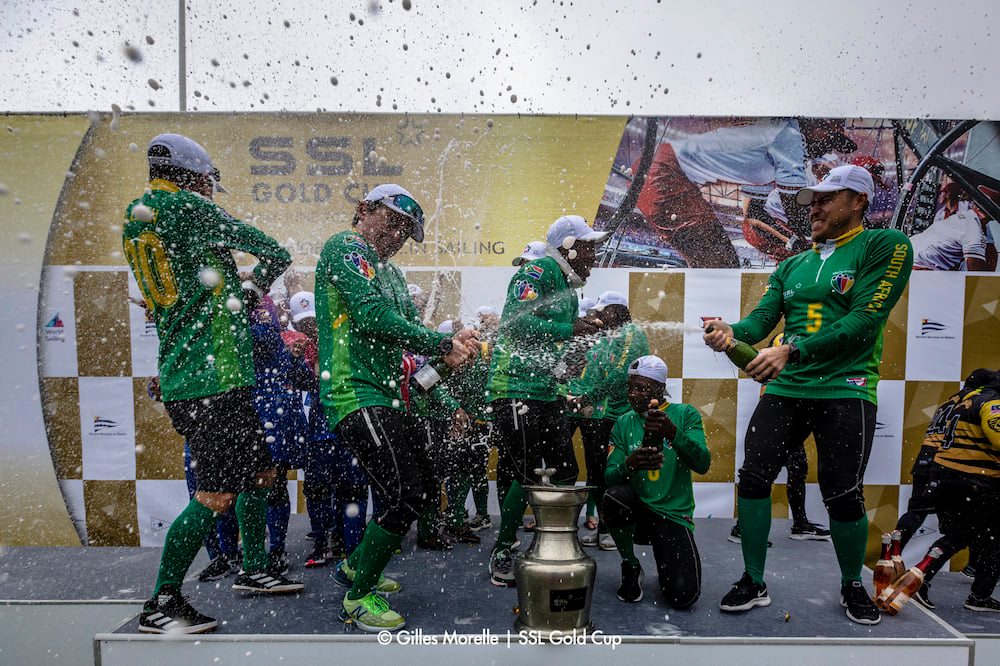 Eight teams representing Turkey, Mexico, France, Ukraine, Malaysia, Thailand, Tahiti, and South Africa took part in Event one. Each team was allowed to field nine sailors per race on their boat. The important stipulation was that all participating sailors had to be nationals of the country they were representing and had to be selected using the acclaimed SSL Ranking system which allocates points based on the global event performance of each sailor, the more you sail, the more you progress up the ranking individually. A captain’s pick further supplemented the skills level on the boats and ensured that there was no bias toward established Olympic classes, considering the skills of crew and not only Olympic class sailors.

Team Captain Ian Ainslie is a long-time champion of “Sailing for All”. He’s a three-time Olympian Athlete and has also coached the Dutch team on three occasions. He assembled the team using the ranking system and was allowed the privilege of the ‘captain’s pick’ too. He put together a team of athletes that truly represents the current level of top sailors competing both locally in South Africa and abroad. This was a truly diverse and representative group of individuals who gelled into a cohesive and collaborative team in a very short time.

When asked about the surprise performance of the team, Ian was quick to point out, “This team represented the culmination of many years of training and racing opportunities, as well as individual dedications to enhance the sailors in our sport. I hope that this result and any future results will inspire clubs, organisations, and individuals in South Africa to continue building a strong talent pool.  The crew work on board was clearly a vindication of the huge impact that local racing has had in the Cape31, L26, and other classes active in South Africa, and complemented by the individuals in the team plying their trade globally, it made for a strong foundation.”

Our Q&A with Ian

We were certainly not amongst the favorites as the team had never sailed these boats before or together as a team before. However, we had a few days of training before the event and it went very well. It was a test event, so the focus was on making a huge step in the teamwork for next year’s main event. The highest ranked team was France. The other teams had trained more than us, and/or sailed together more often, so the others did not have high expectations from us at all.

I think good decision making by the “back of the bus”, good speed and good boat handling from a motivated team, keen to grasp the opportunity. Plus, we are South Africans, so you can be confident that there will be plenty of “gees” and we push each other harder than others do.

Next year’s event will be the first of its kind. There will be 56 nations competing using supplied equipment. Every member of the team must be a citizen of that country, so there are no “hired guns” jumping from country to country. It is modeled on the soccer or rugby World Cup and nothing of this scale has been done before.

The organisors, the SSL, have a panel of esteemed sailors who select a captain for each country. As the captain I could arrange the team as I saw fit. I decided early on that my role would be to make it happen for a South African team and coach the team too. I wanted to form a very competitive team, one that would be representative of South Africa, and one which would also provide a platform for the younger sailors to hopefully make a name for themselves on the world stage.

The team is selected partly from the SSL rankings and partly from my choices. The onboard leadership of the team consists of Paul Willcox (tactician), Gareth Blanckenberg on the main sheet, and Asenathi Jim on the wheel. Twenty years ago, I started a development school in Simon’s town. Four of the guys in Team UBUNTU are from that group. They were able to use that initial opportunity to make a name for themselves in SA and are now racing on board on their merit. I consulted a lot with Gareth about the team. I was also impressed with some of the guys I sailed with on Cape31’s during the odd race I did in Cape Town. The team’s boat handling around the course was impressive for a first sail-together. All our travel and living expenses are covered by the SSL, but no one in the team received payment. Anthony Spillebeen helped me with the management of the team – I was confident that he would make a big effort, irrespective of being paid or not.

There were many good moments on the racecourse, but you always feel especially proud standing on the podium when the SA anthem is playing. I hope it happens again next year.

Yes, the current elite of the sailing world will be competing next year so I would like more opportunities for this particular Team UBUNTU to sail together before May 2022.

The SSL Gold Cup was created out of the need for sailing to become more spectator-friendly and is based on the premise that sports fans are more likely to support their national teams than club teams in their country. Further, the SSL Gold Cup aims to create household names of sailing’s top competitors. It’s such a great idea, and just what the sport of sailing needs.

The four boats provided by the SSL Gold Cup Organisation are matched SSL47’s, a derivative of the highly successful RC44’s. They have been simplified and proved an ideal platform for an event of this nature. The light to medium winds and flat water of Lake Neuchatel meant that the speed differences between boats were minimal, and the racing was extremely tight at all times.

The boats are rotated through the teams, with each team racing in two fleets of four Nations, in a best of five races elimination series. At the completion of each fleet’s elimination series the top 2 nations then progressed to the Final, with the bottom two Nations competing in the petite final. Teams competed in national colours embellished with each athlete’s name, creating a clearly identifiable “TEAM” feeling not unlike that seen in National football, rugby, and cricket teams globally.

The South African team put together a consistent series in the pool racing, despite some tricky conditions and was the top ranked team going into the final. After some heavy rain in the morning, the final got underway and tactician Paul Willcox sailed an absolute blinder in very fickle conditions, expertly linking the puffs and shifts together to put the team in front at the first top mark. A small split with the Thai team on the 2nd beat, allowed them to get back into the race, but a well-executed gybe set at the 2nd top mark enabled us to roll the Thai’s and sail back into 1st.

Paul, Asenathi and downwind trimmer Sean van Rensburg matched the Thai team all the way down the final run and we crossed the finish with a comfortable margin to take overall victory in this first Test Event. 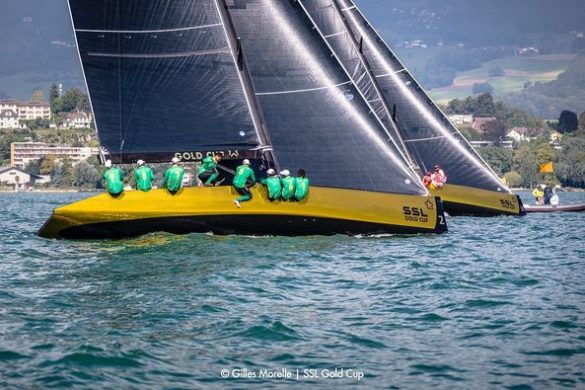 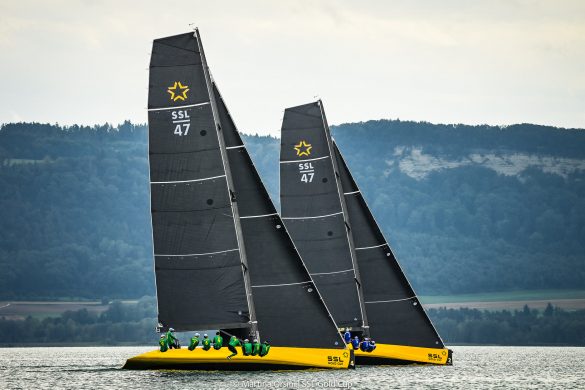 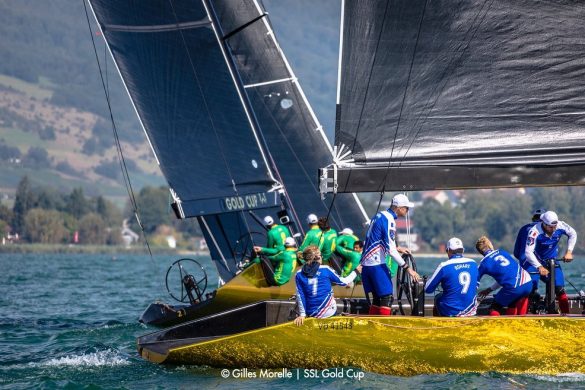 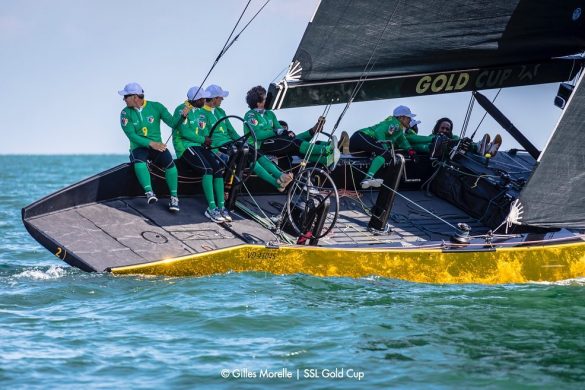 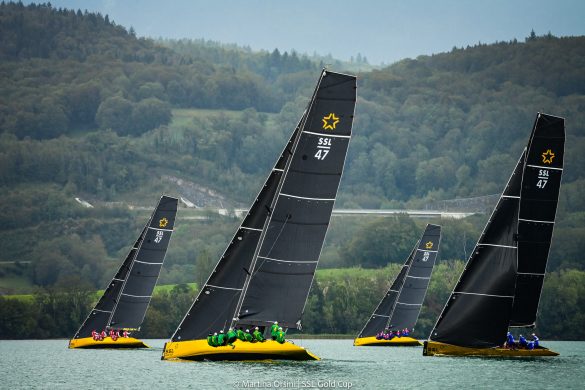 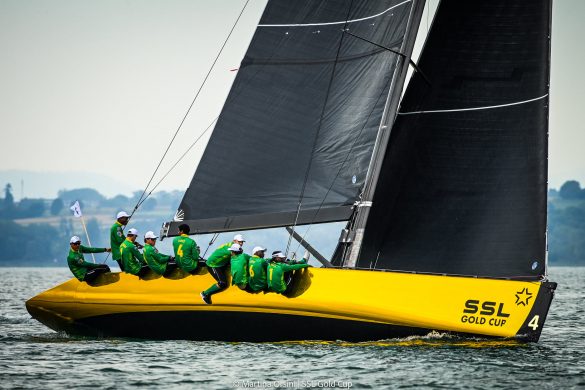 The Test Event format followed that of the soccer or rugby World Cups, with teams initially allocated into pools of 4 countries. Each pool sails 5 races over 4 days, with the top 2 teams from each pool progressing through to the one race, winner-takes-all final.

The process for selecting the sailors who compete in the SSL Gold Cup is meant to create an equal platform for all top athletes to compete, free from financial or political considerations. The creation of a global SSL Ranking for sailors from all inshore racing categories means that, for the first time, sailors in one class should be able to compare themselves directly with those in another. The top ranked athletes in the SSL Ranking will be selected for each country alongside some discretionary ‘Captain’s picks’.

Two more Test Events will be held over the coming three weeks, with various international teams competing, depending on availability. Two more test events are scheduled to take place over the next few weeks:

56 countries are scheduled to participate in the 2022 event. As in tennis tournaments, the lowest ranked teams will start the competition first by participating in the Qualifying Phase. At the end of each round, half of the teams are eliminated; the rest move on to meet higher-seeded teams. The format seems sounds and with a few minor tweaks, could prove to produce a compelling final product.