South Africa’s kiteboarding ‘mecca’ has once again hit the shores of Kite Beach in Cape Town for another epic show of daring talent. Organisers and kite-boarders have been watching the wind closely since the start of the event’s window period on Saturday, 26 January 2019. 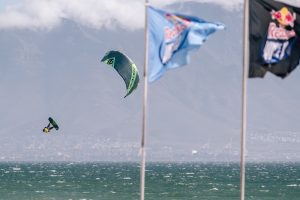 The King of The Air is a favourite amongst the kiting scene, showcasing incredible jumps and style. The famous Cape Doctor south east wind makes for perfect conditions to achieve world-record heights. This year’s event is hosting 18 of the best international and local talent including past champions Jesse Richman (USA), Aaron Hadlow (GBR), Nick Jacobsen (DNK) and the 2018 champion Kevin Langree (NLD). Alongside these superstars are Liam Whaley (ESP) and Lewis Crathern (GBR) who both finished on the podium at the 2018 event. Joining are also two local riders Josh Emanuel (Red Bull Megaloop 2017 winner) and Ross Dillon Player to support, with familiar faces Ruben Lenten (NED) and Jerrie Van De Kop (NED) returning, as well as GKA Kiteboarding ‘Air Games’ World Champion, Carlos Mario (BRA), making his debut at the event. Be sure to get down to Kite Beach to watch this amazing line up. 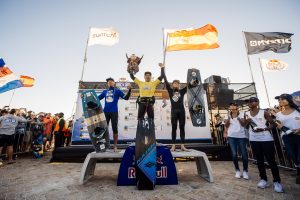 Podium shot of Red Bull King Of The Air, Kite Beach, Blouberg on January 31, 2018The window will stay open until 10 February, so be sure to keep a close eye out for 48 hour and 24 hour calls ahead of the competition. Two days of kiting is needed to complete the event. All updates can be found online or by following @RedBullZA’s social channels – this is not one to be missed! If you aren’t lucky enough to get down there yourself, you can watch the action live on Red Bull TV.

The Debrief: Boat Ownership – Your Options

Podcast with the Pro: Off Watch with Dee...