Following last year’s memorable gathering in Cascais, Portugal, the host venue for the 2019 edition of the TP52 World Championship is Puerto Portals on the island of Mallorca, Spain. Rolex is making the third year of its partnership as official Timepiece of the 52 SUPER SERIES and Title Sponsor of this pinnacle annual event, which will take place from 25 – 29 August 2019. And Sail + Leisure will be in on the action.

The Best of Inshore Yacht Racing

The Rolex TP52 World Championship and the associated season-long series showcase the very best of inshore yacht racing, demanding the highest standard of human and technical performance. The TP52’s are powerful carbon-fibre boats, representing the best of monohull yacht design and build techniques, and are crewed by some of the world’s finest sailors. “The Rolex TP52 World Championship and the 52 SUPER SERIES have the ambition to be the best sailing platforms in the world,” explains Agustin Zulueta, CEO of the 52 SUPER SERIES. “Having Rolex, with its 60 years of history in the sport, as a main partner and title sponsor is one of the milestones in achieving our aims.” 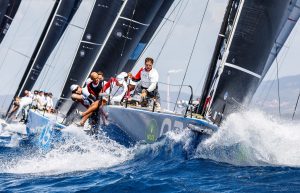 Top Talent on the Water

Racing closely matched yachts means the talent and expertise of the individuals who prepare and crew the boats are critical. Every process needs to be perfectly executed to achieve success. Eleven teams will contest the title over five days of pulsating action, with a maximum of 10 races. The fleet includes the past five winners of the world crown and the three leading crews from the 2018 World Championship. The defending champion is Doug DeVos’s United States entry, Quantum Racing, for whom former Rolex World Sailor of the Year Ed Baird is the tactician. Among their opponents are two former world champions: Harm Müller-Spreer’s Platoon from Germany and Alberto and Pablo Roemmers’ Azzurra, from Italy, last year’s runner-up. Andy Soriano’s British-flagged Alegre finished third in Cascais, while Ergin Imre’s Turkish entry Provezza has made an impressive start to the 2019 season after three events.

Sail + Leisure will be there to cheer on the South African – flagged team Phoenix, and we simply can’t wait to witness all the action. For more information, you can head over to 52 SUPER SERIES, and keep an eye on our page for updates.