Oceans without limits is a venture set to journey across the Indian Ocean to highlight the plight of plastic pollution through research and adventure. Guests can join the crew on a leg or two to support the cause. Headed up by Gert Muller and assisted by Mark Gibson and Jan Dekker, amongst others, the venture is set to create awareness on the extent of the macro, and micro-plastic pollution in the ocean. Sail + Leisure will follow this great inititiative every step of the way!

At atolls and islands where seagrass is present, detailed research will be conducted on the volume of micro plastics present in the seabed sediment and the resultant effects. The aim is to educate, create awareness and conduct research along the way.

The vessel Acharne, which was delivered by Jason Ruger, arrived in Cape Town from the Caribbean at the beginning of February. Preparations are well underway to convert the internals of the boat to accommodate a limited number of guests to join them on a leg (or 2) of their journey from Cape Town to Exmouth in Western Australia via the atolls and islands of the Indian Ocean.

Acharne was renamed and converted into a motor yacht in the Caribbean a few years after her very impressive pedigree as a racing yacht.

She was formerly Sagamore and proved to be a top contender after her launch in 1999, taking line honours in the 2000 Bermuda Race, winning the Middle Sea Race in 1999, and placing first (1999) and second (2000) in Antigua Race Week. The yacht has been campaigned hard, from the Fastnet Race to the Cape Town to Rio Race (coming second in 2000), and sailed by one of the contributors to this venture, Jan Dekker. Her structure, a credit to New England Boatwork’s engineers, composite specialists, and builders, has come through every challenge with flying colours.

By reducing the yacht’s displacement by removing the sailing rig, modifying the keel, and installing a larger engine, an extraordinary explorer yacht has been created. Through the journey, Acharne’s new challenge is to educate and document her findings, which seems fitting in that she has been “recycled” for such an important venture. 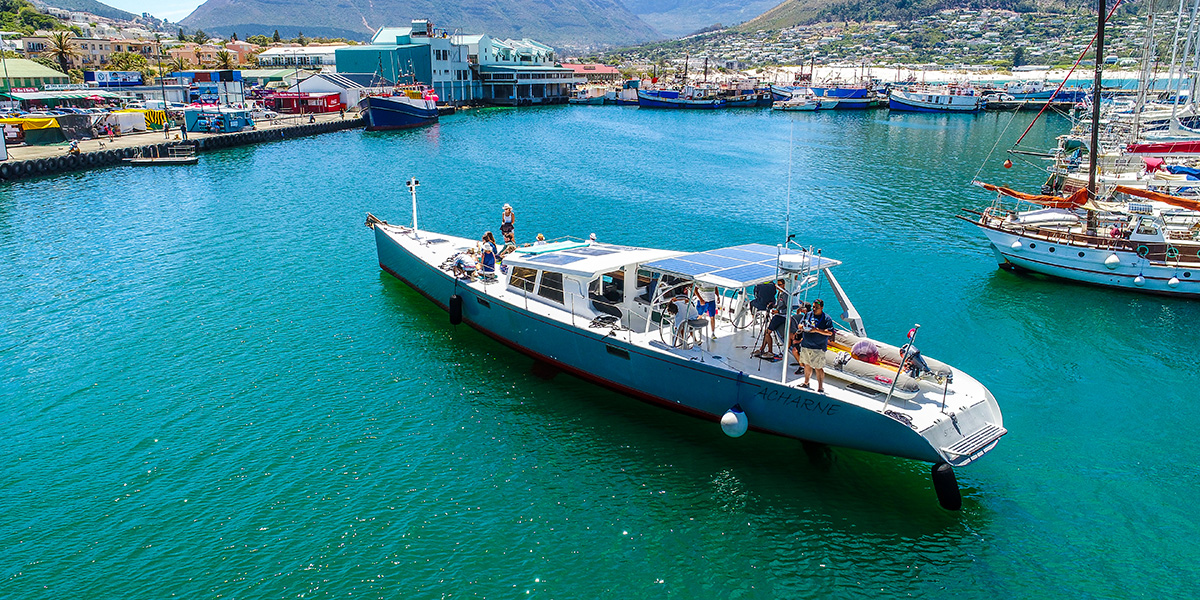 Acharne will sail 100% plastic-free on her voyage. By using the latest in video and camera technology the Oceans Without Limits crew will provide continuous insight into their travels by capturing life at sea, and by providing constant live updates of their location. All data collected on the voyage will be used in ongoing research into the ocean’s plastics pollution problem with suggestions on how we can turn this tide on plastic.