Clipper Round the World Race skipper Nick Leggatt arrived in his home port, Cape Town from Punte del Este, Leg 2 of the race last week. Sail + Leisure managed to catch up with him during his very brief and busy stay.

What was your experience of Leg 2?

My experience of Leg 2  was that it was a tough and challenging event. They were some of the strongest winds and biggest waves I have sailed in when crossing the South Atlantic.

The biggest challenge was having to deal with an injured crew member while still racing in winds that peaked at hurricane force. One of my biggest concerns was always the possibility of one of the team members injuring themselves. We had a crew member break five ribs when he was swept into a winch by an 8 m high wave.

What about surprises in terms of crew work or the sailing conditions?

The team work is without a doubt the biggest challenge, with many of the crew having little more than four weeks of training, and up to half of the crew being changed at the start of every leg. Having said that it was great to see how the team pulled together and kept the boat sailing in very trying conditions while I was having to deal with their injured crew mate. The weather took me a bit by surprise, in that the general pattern was more or less as anticipated, but the storm that hit us was just a little further north and a lot more intense than any that I have seen since my first trans-atlantic crossing back in 1985. 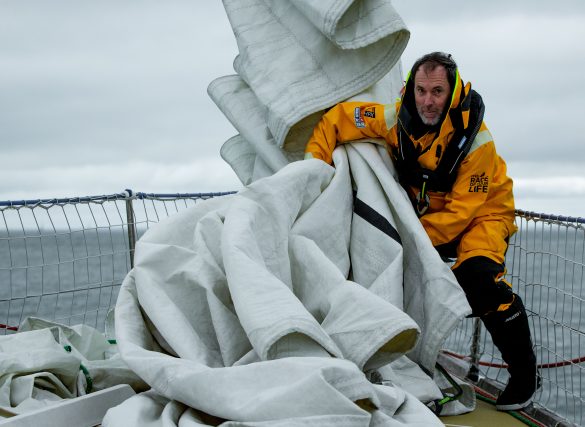 Did you meet your expectations?

Definitely not in terms of race results, but yes in terms of keeping the crew together and motivated for the next leg. We still have a team with an overwhelmingly positive attitude to the race and keen to ensure that we do well.

How do you feel about the next leg?

We are excited and keen to get going and improve our position in the fleet rankings.

What will your strategy be?

Look after the boat and the crew, and the results will look after themselves. In general we will be looking to stick pretty close to the great circle route. Not much point in sailing extra miles, as there is usually enough wind down here for the whole fleet!

What kind of commitments did you have while you were in Cape Town?

Cape Town was a very busy stop-over as we were there for less than a week. Commitments included the usual ones to Clipper, having to give the boat a thorough clean, and complete a detailed rig and safety check. Then there were commitments to the crew, which included having a proper braai at Royal Cape Yacht Club, who hosted me, my crew and Wavy Immelman and his crew for an evening. I then took time to show the members of the Bishops Sailing Team around the boat. I was a member of the Bishops Sailing Team in the early ’80s! Finally we had to spend a day on refresher sail training for the new crew members joining the team for the next leg, as well as provisioning the boat and refuelling.

What was the best thing about being home?

The best thing about being home was seeing family and friends and being able to lie in my own bed and take a hot shower with fresh water! And enjoy the view of Table Mountain.