The fleet drifts towards Club Mykonos in the Mykonos Offshore 2019.

On the weekend of 22 February boats of all sizes embarked on what was promised to be a fast and furious downwind dash in the 29th edition of the Mykonos Offshore regatta. Run by Royal Cape Yacht Club, the Mykonos Offshore regatta is a classic on South Africa’s sailing calendar. The regatta is broken up into 4 ‘Races’. The first is a 62-mile sail from Cape Town to Dassen Island, the second is from Dassen Island to Langebaan, and race number three is the overall results of these two legs. The fourth and most popular race is the Bay Race, which takes place the following day.

Boats came in at all hours that Friday night, some as late (or early) as 6am. Only nine boats finished the race due to the light conditions. The spirits on Saturday were high however, and the starts for the Bay Race began later that morning. 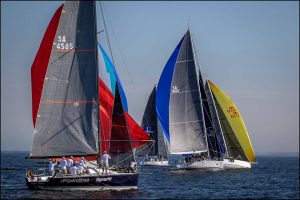 The skipper’s briefing was held at RCYC the day before the start. Organisers went through the predicted weather for the following morning; sailors were to expect pre-frontal conditions with a possible dying south-easter at the start. Despite this not-so-exciting news, 80% of the entries started what was sure to be a slow and long race to the west coast seaside village.

The first boat to arrive on the other side was the Corby 49, Nitro. Mike Hayton, David Rae and the team claimed all three titles for the weekend: Line Honors, Bay Race Champs, as well as taking the overall winner’s trophy for this year’s event.

Saturday saw better conditions than the offshore legs, with the wind sticking around in the afternoon. The Bay Race is one of the most anticipated races on the local sailing calendar; it’s a pursuit race with the slowest boat starting first and the rest of the fleet following according to their handicap. The Bay Race begins off the breakwater at Mykonos where the boats then head to a mark north of Schaapen Island, followed by a long haul to Saldana Bay. They then sail out the mouth, around Jutten Island and back to Schaapen Island before the finish off the breakwater. Langebaan usually offers up a fresh and steady south westerly wind for this race, adding to the beautiful scenery. Following Nitro’s win for the day was Hollard Jacana in second and TNT in third. Prize giving was held that night and was infectiously good-spirited as crews compared their stories. 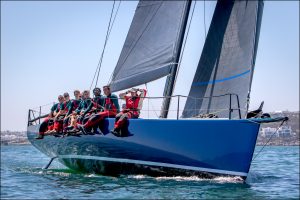 Cape Fling in the Bay Race.

The past few years have seen a lack of wind for this event – a slow sail without all the action is enough to put anyone off making the long journey to Langebaan. Organisers have re-looked the dates for the event to ensure the presence of the promised Cape Doctor wind. We hold thumbs for a fast dash to Langebaan in next year’s Mykonos Offshore regatta. 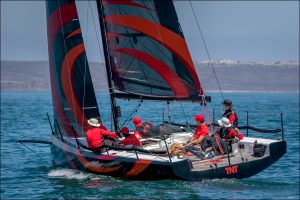 TNT in the Bay Race.

Many thanks go out to the organisers and sponsors that made this weekend as fantastic as it was. See full results of the weekend here and here.