Meghan Hale recalls her weekend getaway to one of Spain’s lesser-known Balearic Islands.

The sky lit up, electrified, and loud claps and echoes filled the streets of Barcelona. The storm came in, and afterwards the city felt deserted and peaceful as we made our way to the airport for the flight that would take us to Menorca. It’s a short hop over (around an hour) to the island, and the excitement of our upcoming adventure made the unstable plane – and the frightening noises it made – more bearable.

We landed in Menorca’s capital Mahón, or Maó as it is known locally, and were greeted by a warm breeze and our host for the weekend. It was a short 20-minute drive from the airport to our host’s family home, nestled between salt pans and a national park, near Fornells. Here we were welcomed with a dish of sweet melon, a local delicacy, served on the terrace overlooking the lagoon that was bright with reflecting stars. Finally, a sense of peace came over me after the buzzing city energy of Barcelona.

We awoke to the sun peeking through our white shutters. Through the slats we could see a flat and sparkling lagoon. Parc Natural de s’Albufera des Grau, where our host’s home is situated, is known for consistent kiteboarding and sailing conditions. We’d watch the group of sailors making the most of the breeze each morning.

The day started with a swim in the pool where we were joined by our host’s wolfdog puppies. Afterwards, we enjoyed a long, lazy lunch, just as the locals do. The traditional Spanish dish of fresh baguette with mashed tomatoes, drizzled with olive oil and a pinch of salt, was a highlight. Island life is slow and peaceful.

We packed our day bags and headed to the south of the island. On the way, we stopped at the small town of Fornells to walk the cobbled streets that weave among the white houses. Imagine Greece with its white and blue aesthetic, only quieter and much quainter. We bought our snacks for the day from the local ‘supermercat’ and continued south.

From the car park at Cala Sa Nau, a 15-minute hike along a sandy path surrounded by Mediterranean shrubs and volcanic rocks brought us to the beach of Cala Mitjana. It was a piece of paradise. The bay was picturesque with its turquoise waters and pearly-white sand. The water was packed with sailing boats and superyachts of all shapes and sizes and the beach was filled with people. The south is known for its blue waters and impressive cliffs and that’s exactly what we had found. 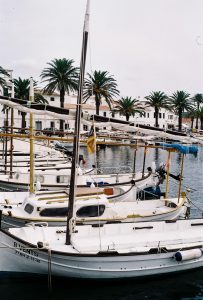 ‘Estábamos viviendo la vida’. We were living the life.

We swam far out into the bay and found a deep volcanic cave hidden beneath a cluster of cliffs. We had to swim for at least 10 minutes to reach the end of the cave. We swam until it was pitch dark and the only source of light was coming from our escape route. The water was so warm, we spent hours swimming and exploring.

The picnic of local fruit and bread we’d brought along wasn’t enough to keep us satisfied for very long, so we decided to take a short drive to nearby Ciutadella. This town is popular among tourists, although it doesn’t feel like your typical tourist destination. It is one of the more beautiful villages to visit with its traditional architecture and restaurants. We walked around the village, stopping in at various tapas bars to sample an assortment of traditional fare. Afterwards, we found a little harbour, where we enjoyed delicious cool gelato.

Later that day we headed back to Fornells to join our host for dinner.
The sun was setting east over the lagoon while our host sat fishing in the last stream of light. We had homemade tomato soup, and sobrassada, chorizo and fresh fish for dinner. The night was young, so we made our way to Mahón for the island’s traditional celebrations. Every Spanish village celebrates a different tradition at different times. Because of this, every weekend in Spain there is a village throwing a traditional festival of some kind, and it just so happened that we were there for the horse fiesta.

This festival involves horses and lots of drinking. The tradition is for the horses to walk through the village alongside the locals, eventually arriving at the main square where they perform for the people. The goal is to get the horses to rear as high as possible while the locals compete by trying to get directly underneath the rearing horse. We admired the competitors while sipping the local drink known as Pomada, a mixture of gin and lemonade. One thing is for sure, the Spanish know how to party! 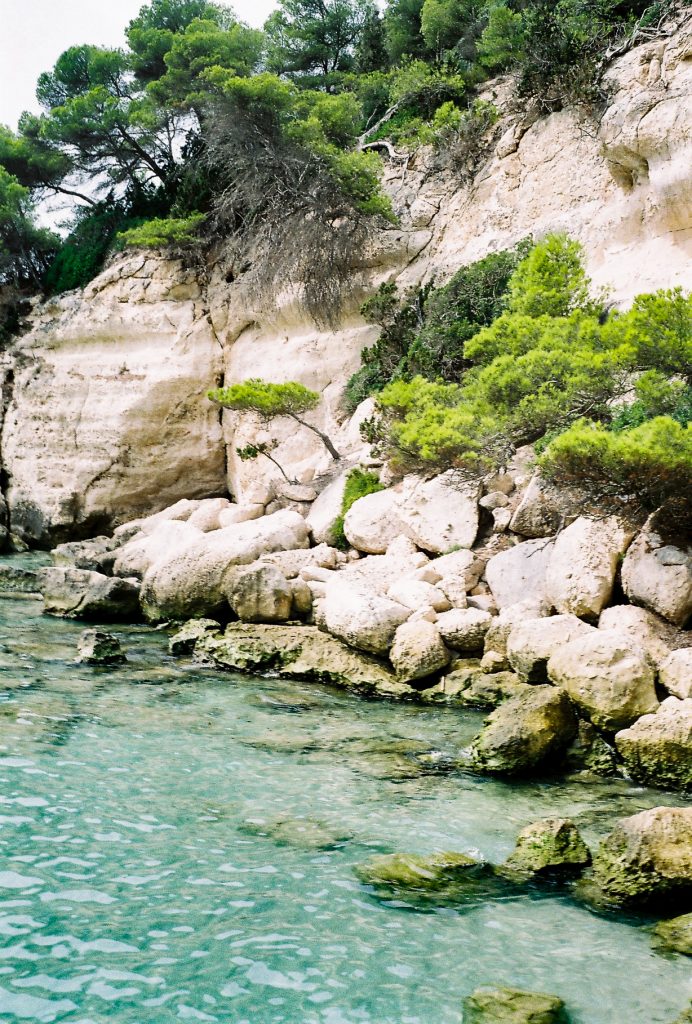 The next day we wanted to explore the other coasts of the island. It was recommended that we go to Cavalleria Beach, which is known for its mud. We arrived at a long strip of beach consisting of reddish-orange sand, which contrasted starkly with the clear, blue water. The beach is semi-nudist and frequented mainly by locals who go there to cover themselves in the mud, which is supposedly rich in antioxidants and minerals. After spending quite some time on the golden beach, we decided it was time to explore the cultural aspects of the island too, so we made our way to Punta Nati Lighthouse. We discovered it was used by the British as a lookout in wartime because of its high vantage point. We also explored the island’s ruins. The locals tell a beautiful story of the mysterious megaliths known as the taulas of Menorca, which were supposedly built by aliens.

The next day we woke to light showers and a warm breeze as if we were on a tropical island. It was our last day, so we decided to visit the north coast.

We made our way to Binimel Beach, which is known for its green stones and tiny coves. If you walk right towards the rock pools and over the sharp sandstone, you’ll find a private cove with crystal-clear water. We found one for ourselves and settled in for some shade. We were in awe of the sand, scattered with jade gemstones, which we used as an exfoliator for our skin. After marvelling at the pristine landscapes made up of sharp cliffs and blue waters, we headed to a local restaurant, Restaurante Binimel.lá, for paella. This traditional Balearic seafood dish is made with fresh crustaceans and fish, caught right in front of the restaurant. Island time here is slow, and we sat there for three hours, as one does in Spain, our skin glowing from the therapy of sun and ocean.

We headed back to the Mahón side of the island with our car packed, ready for our flight later that night. But before our dream weekend ended, our host had one more surprise in store for us. We were to visit a nightclub/restaurant in a cave 100m above the sea called Cova d’en Xoroi. This was the best surprise yet. The restaurant overlooks the open Mediterranean Sea with nothing else in sight. There are VIP areas set up between limestone rocks and also day beds perched on private cliff peaks.

Sadly, our night had to come to an end as we were due to fly back to Barcelona.

Just two hours later we were back in the city, left only with incredible memories and tingling skin.

G E T T I N G THERE
Flights run regularly from the mainland to the Balearic Islands and we flew on a low-cost airline. You can save money on your fare by only taking hand luggage. Most European airlines offer this saving. A ferry service also runs from Barcelona to the island every day

The Best Drone Shots of The Ocean Race