Cape Town-based sports journalist, Jeff Ayliffe, had the enviable job of being the official media man for the Cape Town stopover of the Volvo Ocean Race.

He shares with us what it takes to get behind the scenes to get the shots!

It was a fast-paced, two-week stint of never ending activations, team briefings, boat haul-outs, and action-filled races in Table Bay. Rubbing shoulders with the worlds best sailing photographers, he found himself in the action. This is his take on the experience and the equipment he used to deliver the best shots and footage possible. 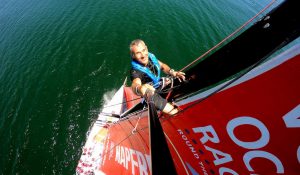 Jeff Ayliffe up the rig of Mapfre

On Sunday, December 10, a fleet of seven Volvo 65’s blasted out of Table Bay, to start leg three of the 2017/18 Volvo Ocean Race, their destination – Melbourne, Australia. During  the 17 day stopover period in Cape Town, I had been assigned to document the dockside activities, along with on-board action. I was once again privileged to secure slots to sail on a few of the boats during both the practice and Pro-Am races.

My ‘weapon-of-choice’ was the new GoPro HERO6,  and what a weapon it proved to be. Upgraded from the HERO5, the 6 looks identical, but under the skin it carries noticeably more grunt in a few areas that are key to my role as professional media-content producer.

Firstly, new software for camera stability takes a hand-held so close to looking like it was being used in a Karma-Grip Gimbal. ( I wasn’t able to use the Karma-Grip on the yachts due to the amount of salt-water spray blasting over the bow) The stability was insane!

Secondly, colour saturation is just spectacular. Standard video footage just brings out the amazing colours and contrasts of the ocean, sky and sails that make it appear that the video has been magically colour-corrected, when in fact it is original, untouched footage.

Thirdly, a massive bonus for use in water sports is having a waterproof camera that doesn’t require the housing, yet it still allows me to capture crystal clear on-board audio and  interviews. The sound of sheets creaking around the carbon drums, and sea-spray whipping into the crews foul-weather gear like the cracking of whips, the crew comms, the hoisting of the kites etc. are all captured in stunning audio quality. Once again, as a media professional, that’s key for me.

Its almost become standard now for some of the crew to send me up the 100ft masts to shoot action footage from the rig during the racing, and needless to say, the size, weight and quality of footage makes it the perfect camera to have with me to capture this action. I know that I just turn it on, and all colours, sights and sounds are delivered to my PC later exactly as I experienced them. 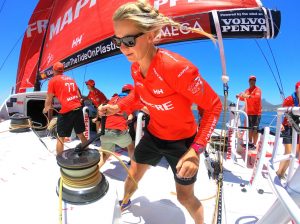 Lastly, when involved in racing on a Volvo 65, things happen fast, and there is no time or opportunity to request a ‘re-take’.  This means I question “Do I shoot video, or do I shoot stills?” With the HERO6, I always shoot video, because one of my favourite discoveries about this new camera, is that the quality of the screen grabs is sensational!

Battery life is improved from the HERO5, but I would always suggest having a spare. (The battery did last an entire practise race plus pre-race brief, sail hoist etc) which was about 2 hours, but you don’t want to be holding back on shooting.

Another key element, is that the lens on the 6 is detachable, and easily replaceable. Sailing is a rough and tumble sport when the breeze gets going, and the prospect of hitting a lens is always possible. In the past, that’s the end of the camera, but now with the 6 just unclip, and replace with a new lens – simple!

In summary, it’s an OBR’s dream.

The new HERO6 and must-have accessories are available at specialist retail stores. Enquiries.

Check out our article: Which is the right Go-Pro for you?