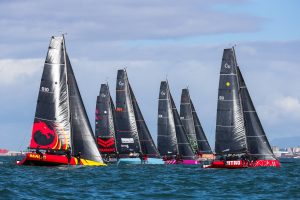 After the third scheduled day of racing of the Lipton Challenge Cup was cancelled on Wednesday due to a strong Cape winter’s storm, racing resumed yesterday.

The conditions were icy, with rain, and huge swells of between 2.5-3m’s with drastic wind shifts. All this didn’t make for an easy day out on the water. 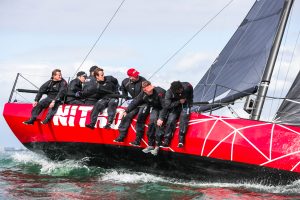 But it was anybody’s day. The positions changed from leg to leg, and boats that were in last place landed up in the top 5 positions and vice versa.

The first race sailed was the obligatory triangle course. Mark Sadler, helming Orion For Royal Natal Yacht club took the win by gaining on a wind shift, followed by David Rae, sailing Nitro for Witbank Yacht club, and Bjorn Geiger’s MB Racing sailing for Walvis Bay Yacht Club, came in third. Gerry Heggie sailing Yanmar for Royal Cape Yacht Club lost his first place due to the wind shift after leading for most of the race. 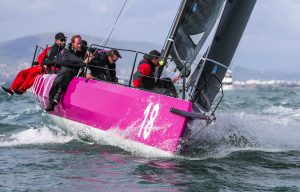 The second race sailed was a windward leeward course, and once again the shifty conditions made for a lotto in the results. No two legs produced the same top three positions, and until the very end, it was anyone’s race.

However, Nitro’s consistent sailing, and by mostly being on the right side of the course helped them take the win over Geoff Meek on Scud sailing for Langebaan Yacht Club. They were followed Orion (Royal Natal Yacht Club), 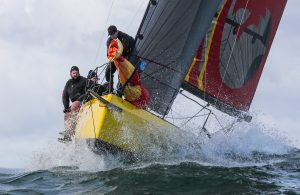 The provisional overall results after 4 races: