Since February 2017, the NPO Saving Langebaan Lagoon has been fighting a government approved aquaculture development zone (ADZ) that is set to take up 884 hectares of Langebaan’s waters. The strong community of sailors, ocean enthusiasts and residents are concerned for the future of their playground.

What It’s All About

The ADZ of Langebaan is an industrial-scale plan by the Department of Agriculture, Forestry and Fisheries (DAFF) to set up bivalve (mussel and oyster) and fin fish (salmon and trout) farms in the waters of Saldanha as well as at the entrance to the Langebaan Lagoon. Aquaculture has been practiced for many years, but the industry has recently boomed worldwide in response to the issue we are facing that is food security. In South Africa however, most of the existing aquaculture isn’t ‘feeding the people’, but rather exporting quality items oversees, as well as producing fish meal.

The case made by developers for this group of farms is the potential job creation and industry development; but are the environmental and socio-economic risks worth these returns?

From a recreational perspective, the waters of Saldanha and Langebaan have been used for generations by many for sailing, boating, windsurfing, kiteboarding, paddling, swimming and fishing. With the current mussel farms set up between the ore jetty and Saldanha Bay, it is virtually impossible to sail to any of Saldanha’s beaches from Langebaan. The proposed fish farms in Big Bay North will limit the accessibility to these waters even further. Additionally, the Mykonos Offshore race, which consists of a race from Cape Town to Club Mykonos and the popular Bay race, will become trickier to navigate due to the patch of farms planned just North of Jutten Island. Windsurfing and kiteboarding will also be greatly affected by this development as their waters are reduced to a slither to share with motorboats, fishermen, sailors, swimmers, paddlers and water skiers. By reducing the size of the area, these athletes are likely to seek other waters to enjoy their sport on and thus we will see less bed nights and meals required in Langebaan. A crash in the tourism industry can be foreseen, leading to job losses.

The number of jobs created by these water sport enthusiasts is rumoured to be around 10 000 in the high season, which is a good number for a small coastal town offering nothing but the West Coast National Park and its waters for recreation.

The largest concern amongst community members is the obvious attraction of more local fish scavenging off left-over feed, which in turn attracts seals, and of course, sharks. This has been seen worldwide in which regions adopting open-water fish farming experience an obvious increase in shark activity. Although there are many seals for meals at this moment in time, this is not ideal for water-sports enthusiasts. It will only be a matter of time before an attack will be recorded.

The reputation that aquaculture gets is not unwarranted. Open-water cages pose a threat to biosecurity. An ever-growing worry in industrial-scale farming is the use of antibiotics in fish farming, which are passed through water systems and the actual meat of the animal ingesting them. These antibiotics pollute the water system and will in turn be digested by wild species. The result of an over-intake of antibiotics is the risk of antibiotic-resistant bacteria which are responsible for the deaths of hundreds of thousands of people a year. Specifically to Langebaan, these pollutants  threaten the general unemployment in the area if the tourism industry takes a hit due to contaminated or unsafe waters. 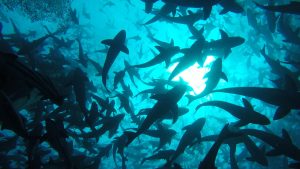 Modern aquaculture techniques have been under scrutiny for many years due to the issues they impose on the environment. The technique used for bivalve farming is considered a ‘passive’ method of farming, as the animals feed themselves with the free-flowing water in the ocean. Invertebrates such as mussels and oysters are fairly sustainable to farm when doing so at high densities (300 per rope/crate), and are considered very useful in removing excess nutrients from the water.

The finfish farms planned for Saldanha will be growing Atlantic salmon and trout, both of which are aliens to the region. The system will be a cage in the open water, also utilising free-flow. A massive concern surrounding open-water aquaculture is the surplus of nitrous waste (that a large concentration of fish tends to create) which will flow directly into the surrounding ocean. Nitrogen waste is what causes eutrophication or algal blooms, which overpower other forms of life sharing the water. Alongside this concern are the risks of fast-spreading and evolving disease or parasites which are then passed on to wild species, as well as the flushed antibiotics or vitamins. Thus, finfish farming is not considered the best practice based on its direct effect on local ecosystems.

Integrated aquaculture is a process in which species like mussels and oysters are grown alongside finfish in order to compensate for the excess nitrous waste caused by the fish, making it a more sustainable practice. However, this is not a perfect relationship, and the bivalves can only aid in removing some of the nitrous waste, but not any of the other ocean contaminants. As can be seen in the figure below, bivalves are planned to be placed next to fin fish farms in certain areas on the coastal side of the zones. The areas marked with a “C” will be fish cages. An environmental threat which has not been mentioned in the report released by the consultant agency analysing the ADZ, is that of nitrogen-dense water being caught by the channel and subsequently dumped in the lagoon, and eventually trapped higher up in the West Coast National Park, which is a highly sensitive zone. 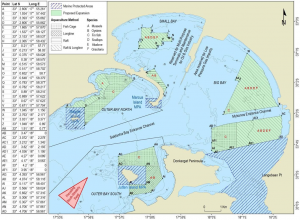 Nitrogen-dense water in the park would completely change its ecological structure. This zone has already experienced a lot of change over the years with the disappearance of large patches of seagrass, a used-to-be integral foundation of this ecosystem. With a flux of nitrogen, algae and seaweeds will grow faster than seagrass, thus inhibit the seagrass all-together as they block the sunlight. Seagrasses are ecosystem engineers as they create unique environments just with their presence; they are also considered to be the ‘lungs of the sea’, and produce more oxygen than other plants in the ocean. The beloved crystal blue waters of Kraalbaai and Church Haven are largely the result of the seagrasses; there is a high chance of the aquaculture development having a hugely negative impact on this entire system.

Saving Langebaan Lagoon plan on taking their battle with the developers and government to High Court. To do this, they need to raise R2.5 million – now is the time to stand up for our playground! You can get involved and donate via their page. Spreading the message is also important, so please share and speak up! If you have any further questions, you are welcome to contact any of us at Sail + Leisure, alternatively you can use Saving Langebaan Lagoon’s contact page.