A proud Italophile, lifestyle editor Helen Clemson discovers an off-the-beaten-track area in the hidden depths of Italy that’s been lovingly restored into a living, breathing rewind of a place that time forgot.

It’s easy to get sucked into the ‘Big Four’(Rome, Florence, Venice and Milan) but head south of these tourist traps, and you’ll happily stumble upon Italian beauty – both natural and architectural – beyond your bucket-list dreams.

That’s Matera, in the region of Basilicata in southern Italy, for me. It’s difficult to fathom that less than 70 years ago this part of the country was known as the ‘shame of Italy’ due to its grim poverty. The reason for the nation’s embarrassment was the way in which the people of Matera’s Sassi (Italian for ‘stones’) district were living.

To fully understand these conditions, one needs a brief history lesson. First occupied by early man in the Paleolithic Period, the myriad natural caves in the area were gradually burrowed deeper and expanded into dwelling spaces by their inhabitants. This continued through the ages and into the modern era.

In the 1950s the entire population of roughly 16 000 people were relocated to better living conditions in new housing projects, and the Sassi began its transformation into a living monument. The bonus for travellers seeking authentic experiences is that you can not only visit the Sassi, but you can rest your head there too – in a cave, and a very chic one at that. 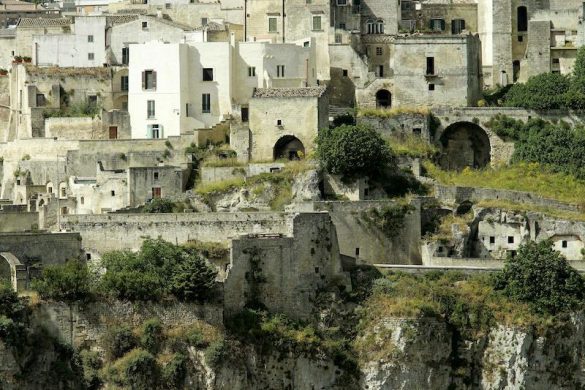 To immerse yourself fully in the Sassi experience, book a cave at the truly bonafide Sextantio Le Grotte della Civita. This hotel is pure Matera magic, thanks to the historically enriching experience it offers.

All the rooms at this beautiful property are dug out of existing rock – think centuries-old caves (or civitas) that have been lovingly and thoughtfully restored. The simplistic, striking glory is seen not only in the bedroom caves, but also in areas like the Cripta della Civita, once an ancient church and now the hotel’s breakfast room and common area. While the hotel’s developers have been extremely careful to keep the look and feel as authentic as possible by retaining original features, the mod cons (and let’s admit they are nice) are all there. So while Italy’s forebears may have spent chilly evenings in the Sassi, thanks to indoor heating, winters in Matera are no longer an issue. It may be tempting to ensconce yourself in your very own piece of rock antiquity, but outside your civita there’s a rather astounding view.

Declared a UNESCO World Heritage Site in 1993, Matera’s Sassi is also the proud host of th  Murgia Park and its rock-hewn churches. As a guest at Le Grotte della Civita – located in the oldest part of the Sassi – this natural wonder is your constant backdrop.

Italy is known for its cathedrals and churches and Matera is no exception. It is the site of the Park of Rupestrian Churches of Matera, comprising rudimentary cave churches among others that blend the beauty of stark rock with the splendour of the interior frescoes and decorations they house.

From the simplest of caves where farm folk worshipped to more imposing structures such as the Church of San Pietro Barisano, these incredibly preserved sites are definitely worth a visit. Make note of the Church of Santa Lucia alle Malve, the Rupestrian Complex of Convicinio di Sant’Antonio, the Churches of Santa Maria de Idris and San Giovanni, the Church of Santa Barbara (the frescoes here are superb) and, finally, the Rupestrian Complex of Madonna delle Virtù and San Nicola dei Greci, between Sasso Caveoso and Sasso Barisano. Every year the latter hosts a significant international sculpture exhibit. As is the case with most European city or town holidays, expect to do a lot of walking. This luckily ramps up the appetite.

At Ristorante Baccanti (baccantiristorante.it) in the Sassi I ate splendid stuffed ravioli with pezzente (typical pork sausage) and a bean sauce, while my husband dined on veal cheek with puréed potatoes, green beets and Aglianico wine sauce. It’s just a seven-minute walk – if that – from Sextantio Le Grotte della Civita and is housed in, you guessed it, ancient caves. With its pared-down luxury and minimalist feel, I’m happy to report the cuisine is heartily Italian and the wine list plentiful.

Visit sextantio.it for details on Le Grotte della Civita and its sister property Santo Stefano di Sessanio, a fortified medieval village in Abruzzo in the hidden depths of Italy.

Tip: if you’re a Game of Thrones fan, a few nights at this culturally historical project, situated in the most beautiful countryside ever, will make you feel as if you’re live on set.