Seafaring Superstitions to Remember This Halloween

Seafaring and superstitions go together like the Gorton’s Fisherman and a yellow raincoat. There’s just something about the maritime life that seems to inspire trust in supernatural forces. We’ve compiled a few strange superstitions that perhaps even our most avid sailors don’t know.

Although they are a major import between countries, it’s considered bad luck to have bananas onboard. Why? The fruits were thought to have a negative effect on the crews abilities to catching fish. This myth originated in the Caribbean in the 1700s, when boats carrying bananas for trade had to sail faster between ports to get them to market before spoiling.

Sailing fast made fishing difficult, but rather than blaming the speed of the vessels, sailors focused their woes on the cargo.

Earrings Protect a Sailor From Drowning

For sailors and pirates, earrings were far more than just fashionable accessories. The jewellery carried with it the superstition that a sailor with a pierced ear wouldn’t drown. Sadly, sailors with pierced ears did occasionally drown – but if their bodies were recovered with a gold or silver earring, the earring could be cashed in to cover funeral costs.

Lucky Coins Should Be Placed Under The Mast

Mast stepping – the practice of raising a mast on a ship – brings with it a superstition that is thought to go back thousands of years. When a ship’s mast is raised, coins are placed under the mast into the step. The practice dates back to the Roman era. If the ship sank, the coins could be used to pay Charon to ferry the sailors’ souls across the River Styx to the underworld.

The superstition is still observed today. The USS Teddy Roosevelt, for instance, had a plaque and a sealed box with lucky items welded to its mast when it was overhauled in 2011.

When sailing across the equator for the first time, it has long been believed that crews must offer a tribute to Neptune. This should apply to any of the first time equator-crossing crew members on board. Without this tribute it was thought that your vessel will be plagued by storms and heavy seas.

Even in todays modern ocean crossings, crews will dress up the tribute(s) as offerings while the captain or skipper dresses up as Neptune ready to accept offerings for safe passage across his seas. Often used as a type of initiation ceremony this tradition can also involve shaving heads and eating bizarre foods.

The Story of The Flying Dutchman

Known for its terrible storms and treacherous outcrops of rock, The Cape of Good Hope in South Africa once had a far darker name: The Cape of Storms. This rocky peninsula, which juts out into the water, was the final resting place for many ships unfortunate enough to run afoul of this beautiful yet temperamental coast.

European trading ships heading to Asia would have to pass through this dangerous route, and one of the first people to journey around the southern coast of Africa was the Portuguese explorer Bartolomeu Dias. He was followed by Vasco da Gama, who was the first person to sail directly from Europe to India and, it is said, the first person to name this rocky headland ‘The Cape of Storms’. It is from here that the legend of the Flying Dutchman set sail.

The Beginning of the Legend

Taking you back to 1641 when The Flying Dutchman’s captain, Hendrik van der Decken, and his crew were returning to Holland from the Far East when they, like all trade ships, had to risk the dangerous passage around The Cape of Good Hope under the employment of the Dutch East India Company.

Legend has it that, as van der Decken and his crew attempted to round the Cape, a storm began. The crew begged their captain not to sail into the storm, but he was determined to sail around the Cape, even if it took him ‘until Doomsday’ to accomplish it. Some say that, at one point, an angel appeared to van der Decken, and the Dutch trader shot at his otherworldly visitor. With that, the ship’s fate was sealed and the ship sank, with a full crew on board.

The Flying Dutchman now haunts the worlds oceans appearing as a ghostly, glowing ship. It will materialise suddenly and then, just as suddenly, vanish. Some claim the ship, doomed to sail the seas forever, will attempt to make contact with other travellers, and that seeing the Flying Dutchman is a sign of horrible misfortune to come. Any who witness this goulash site should return to land immediately, or else. This story was made famous by the Pirates of the Caribbean movies.

Whether maritime superstition or true event, the Flying Dutchman continues to haunt the Cape. Standing on the beach on South Africa’s southern coast, looking out beyond the crashing waves, you may just catch a glimpse of a hazy ship longing for home. 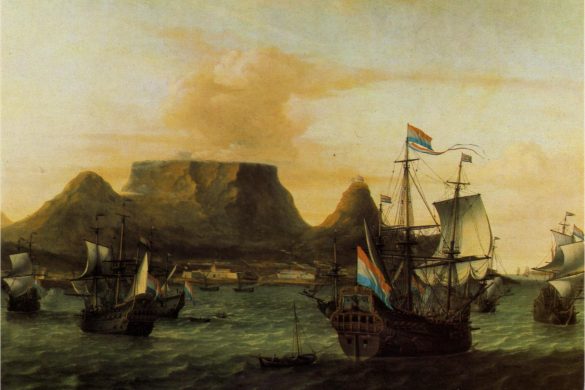 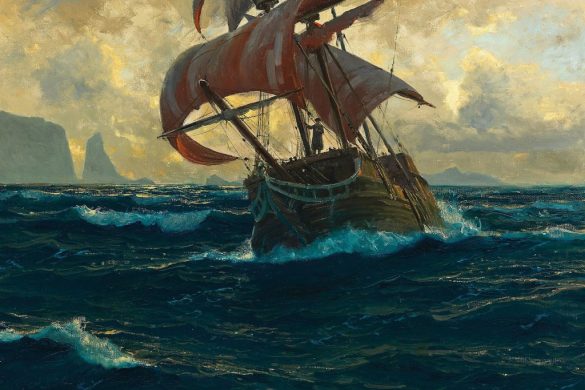