Ferney Trail Run | Running for a Cause

Debbie Hathway returns from the 12th CIEL Ferney Trail in Mauritius fired up to be more active next year.

That’s what I say every year. And after the 2018 CIEL Ferney Trail, I was determined to enter this year. Extra motivation was the organisers’ introduction of a fun 8km option for those who simply wanted to enjoy a little exercise around one of the most magnificent natural attractions on the southeast coast of Mauritius.

The annual event is held in September in the Ferney Valley, a privately owned domain where 200ha is dedicated to the protection and rejuvenation of endangered flora and fauna in some of the last remaining endemic forest on the island. The proceeds are split between La Vallée de Ferney Conservation Trust and Inclusion Mauritius, a group of 12 NGOs working for people with intellectual and physical disabilities.

Looking through the commemorative photographs on Facebook brings memories of my third consecutive CIEL Ferney Trail attendance flooding back. So many smiling faces – 3 400 to be exact – some of the most memorable being the reactions of the two participants in the joëlette (an adapted chair for the physically disabled) as they were carried around the Nando’s 10km race by a band of volunteers. Young Kurish Gajadhur from Mauritius and Marie Jeanne Robert from Reunion Island covered ground that most able-bodied people never will, partly because they’re not fast enough to get their entries in before cut-off! 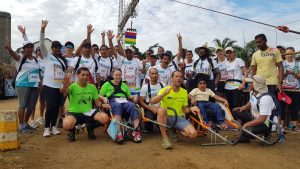 The Nando’s 10km was oversubscribed last year, hence the introduction of the Nando’s 8km Fun Run. The former was capped for 2019 to control numbers passing through some of the more delicate areas of the landscape. “Many participants are noncompetitive and want to walk so we changed the route. Some plants were trampled last time with too many people on the track,” says Mathieu Razé, Group Head of Communications and Sustainability at CIEL.

Don’t think that the shorter distance is any easier though. Jean-Marc Rivet, technical and administrative supervisor of the CIEL Ferney Trail, took us on a recce of the new routes the day before the race. It’s really something that needs a little training and the right gear! The sheltered tracks patterned by the roots of the indigenous forest can be wet and slippery. It can also be incredibly humid under the tree canopy, in contrast to the hot sun (or rain when the tropical weather system kicks in) through the open stretches. Not that it puts anybody off – these are simply things to be mindful of in your race preparation.

The other change was the amendment of the 50km to the Allsport 37km, designed to encourage more entries over a longer distance, while still incorporating the daunting summit of Lion Mountain at sunrise. That was a great idea and it worked!

The Bank One 20km and the Sun Kids 4km race were well supported. It’s not unusual to have entire families participating in this event, which has become a must-do for the fitness conscious and outdoor lovers living on or visiting Mauritius at that time. 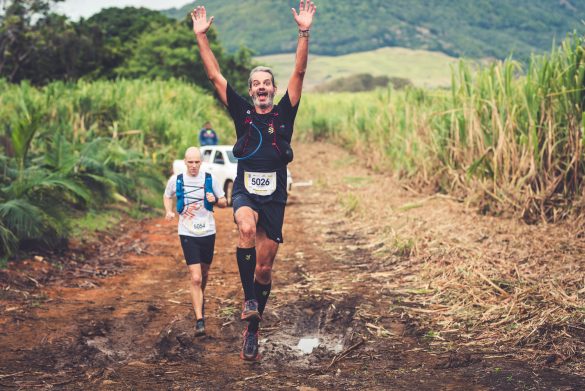 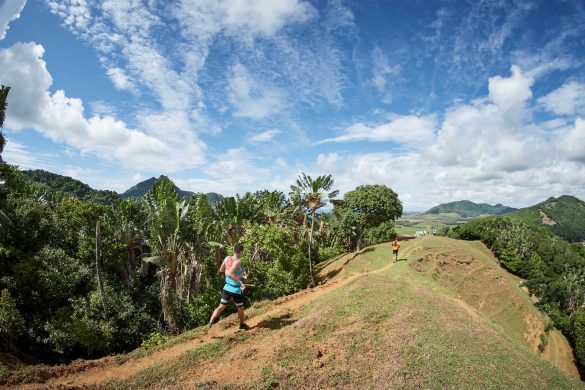 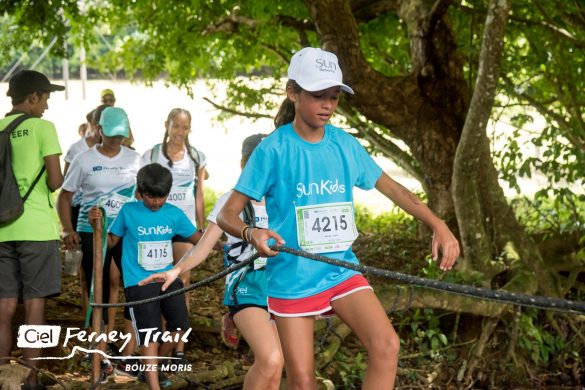 I was at the finish to see German victor Moritz auf der Heide complete a gruelling 37km race, 50 seconds ahead of four-time CIEL Ferney Trail winner Jean Eddy Lauret from Reunion Island. Auf der Heide has an ITA 884 index, putting him in the second tier of the Elite global classification (the top tier starts at index 900). Third on the line several minutes behind was Simon Desvaux from Mauritius. Lea Cavelier from France was the first lady across the line in that race.

“It’s my first time on this island. When I had a look at the profile before, I was pretty happy, not so much elevation,” says Auf der Heide. “It didn’t look too crazy, so I started very content, until I got to the first climb… I didn’t expect it to be so tough. For me it was then a matter of not running too hard because I knew there were a lot more technical climbs to come. Jean Eddy came up to me at about 16km, and then we ran together. After about 29km, when we came out of the technical sections, I managed to get a gap on him, and we went into the downhill. I was feeling ok, thinking I was going to win this, and then all of a sudden he was right behind me. So for the last 3km I went all out just to get to the finish in front of him.”

Auf der Heide had to change his race plan thanks to the humidity. “In the forest it was crazy. I think I drank six litres of water today! It wasn’t my best performance in terms of speed, but I don’t care. It was super beautiful, good competition, I managed to win, so I’ve got everything to be happy about.”

Wandering around the general area, listening for South African accents, I chatted to who I thought was another 37km finisher. “I just did the 10km for fun with mates,” he tells me. “Doing anything more than 10km isn’t fun.” Tall, tanned and well built, I ask for his name. “Cabous,” he says, and begins to spell it – as if I didn’t know what was coming next! The last time I saw Cabous van der Westhuizen in the flesh, I was managing a sports injuries public relations account and this former SA rugby player was in his prime, long hair and all.

Rugby fans who like to keep track of what he’s up to might like to visit his new venture. He’s calling it Landshark Bar & Grill and it’s set to open at the end of October. It’s at the old Sea Lovers site in Pereybère, a particularly beautiful spot with loads of potential with a tiny strip of beach. I can’t wait to see that transformation! 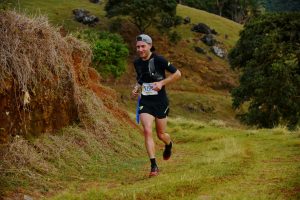 Furthering the CIEL Group’s sustainability initiatives, finishers received bamboo cups this year instead of T-shirts, the manufacture of which has a higher environmental footprint. Water was dispensed into trailers’ own cups, which they had to carry with them, eliminating the use of plastic water bottles. Recycling bins were in evidence in the race village, with monitors on hand to guide the waste disposal. “We’re investing in local,” says Rivet, who is also behind the development of the Ferney Nature Lodge, which will be open for business as soon as the necessary licensing formalities are completed.

It can accommodate eight guests in four individual lodges with double bedrooms en suite, and up to 50 guests for functions in the lounge and dining area. Taxis will be commissioned from the nearby village should transfers be required.

“What do you hear?” asks Rivet, during our site visit. Absolutely nothing. Birds, maybe. Among the protected bird species now in the valley, there are 15 to 20 breeding pairs of endangered Mauritius kestrels. You can watch one pair being fed daily at noon.

Meanwhile, for those who can’t visualise participating in the CIEL Ferney Trail, but still want to experience the beauty of the Ferney Valley, there is good news. More tracks have been opened to the public to explore on foot or mountain bike, out of hunting season, for an annual fee of Rs1,500 (R617 at time of publishing). The routes cover 5km, 13km and 20km and that registration gives you access as often as you like.