FAST40+ Race Circuit | The Line Up

The gloves were off for Round One of the FAST40+ Race Circuit with eight FAST40+ teams in the combat zone for the Royal Ocean Racing Club’s 2019 Vice Admiral’s Cup held from 10th – Sunday 12th May. Eight races were scheduled in the Solent on fast and furious windward leeward courses, and round the cans style races.  Rán won this in a close encounter with Girls on Film and Tokoloshe II who took second and third place respectively and who are sailing with South African’s as crew members. See full results here.

If round one is anything to go by, it will be a hotly contested circuit. 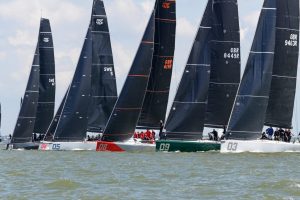 The Fast40+ fleet line up for a start

Who’s in the line up this season?

With Round 1 in the bag, Niklas Zennstrom’s Carkeek designed FAST40+ Rán will be the boat to beat this season, having joined the class last year and winning the 2018 FAST40+ Race Circuit. Rán’s crew continues to feature young talented amateurs, eager to learn from world class sailors. The core of the team have been racing together for many years in the 52 Super Series and on the Maxi72 Circuit; Niklas Zennstrom on helm, Tim Powell on main, Justin Slattery in the Pit, and Steve Hayles on Runners. Double 470 World Champion Nic Asher is the tactician.

2017 FAST40+ Race Circuit Champion skipper Peter Morton is racing CF40+ Girls on Film with his Cowes based team. The Girls on Film boat has Team Ineos‘ Ben Cornish racing with them as an early season stand in for World Match Racing Champion Gerry Mitchell. Multiple world champion Will Beavis joined the team, sharing roles with round the world sailor Jason Carrington. And Chris Dorey joins the team on the sharp end of Girls on Film. South African Anthony Spillebean is also on board.

There is a switch around for FAST40+ Class Chairman Tony Dickin, who purchased the Carkeek Mk3 Rebellion pre-season for a tilt at the 2019 title. Now renamed Jubilee, multiple world champion Kevin Sproul joins the team as tactician. Tony Dickin’s previous FAST40+ is now under the charge of Ed Fishwick and renamed Redshift. Ed Fishwick’s team had a glorious baptism of fire this month, winning overall in a fleet of 108 yachts in the 30-knot, 160-mile RORC Cervantes Trophy Race. Redshift’s team includes Hannah Diamond and Dave Swete from the Volvo Ocean Race, and will be skippered by Figaro exponent, Nick Cherry. 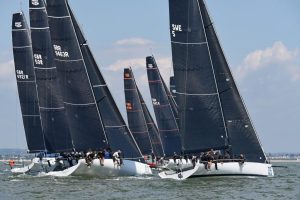 The six regatta 2019 FAST40+ Race Circuit promises thrilling high speed action for the owner-driver class. A total of 50 races are scheduled with six discards available for the total points score for the season.

Stay up to date through the FAST40+ Class Facebook page or via the official website for full results.

Beauty in the Bush | Botswana