The wonderful thing about being a delivery skipper – besides having hours to spend fruitlessly contemplating the meaning of life while looking up at the stars, and never having to buy fish – is that when civilisation starts feeling more like a mental hospital we get to run away and restore our diminishing sanity.

The call I received from Bruce Tedder, the South African Lagoon Catamaran agent and co-owner, couldn’t have come at a better time. I was sitting in traffic when he asked me to quote on delivering two Lagoon cats to Cape Town from France. The concrete madness before me suddenly melted away to reveal fresh sails like the wings of a swan and, with a breeze at my back, I felt myself riding the northerlies towards tropical climes as I raced dolphins playing in the bow waves. I imagined mackerel skies, red sunsets, swimming in the tepid waters of the equator, colourful lunches in the cockpit and freshly caught tuna…

Gary Ruger, my most trusted and experienced skipper, would captain the 45-foot cat, Cheers, and I would be in command of the 42-footer, Ruby Ruby. Our journey would take us across the Atlantic twice – once by air and then a sea voyage of nearly 8 000nm.

Avoiding the salt-water cocktails, headwinds and Benguela Current that would define the direct route, we chose instead to ride the Canary Current south from Europe, cross the Intertropical Convergence Zone (ITCZ), also known as the doldrums, and head south along the Brazil coast with the help of the Brazil Current. Just north of Rio, we would turn east for Cape Town.

As my deputy, I chose an old friend from school, Nicholas Mittelmeyer, who had done several crossings and as my crew a young couple, Jean Niemann and Danielle Boon, already in France and waiting to board. Following some exhilarating flights and a scenic train ride through the Bordeaux region, we reached our new charges. Like shamefully opening someone else’s present at Christmas, our reverence for these beautiful machines was not without a little guilt at the entitlement of enjoying them before the owners could. The captain’s quarters on this three-cabin 42-footer, spanned the length of the starboard hull, were the equivalent of a small New York apartment complete with sofa, desk, queen-size bunk and a stately head. Gary’s boast on the 45 was a flybridge with full-control helm station giving an elevated view of the decks and sea ahead, and the swankiest cockpit layout I’ve ever seen.

We were met by Bruce, who had flown over to oversee the handover of the vessels in Les Sables-d’Olonne and ensure they had been built to the impeccable standards that Lagoon is known for. During our own inspection we found that the finishing and attention to detail were superb, and we were particularly impressed with the roominess of the saloon area. Going through the guts of the boat we noticed that the plumbing and electrical layout were very sensible, a tribute possibly to the ‘poor folk’ whose sailing memories are clouded by the horrors of contortionism and awkward spaces.

Several days later, after touring the supermarkets and applying my fair Spanish to the uncomprehending Frenchmen of this seaside resort, and meticulously wrapping counter tops, saloon cushions and other inventory with every protective covering possible, we set sail across the Bay of Biscay. Known for its tricky weather, we had to kill time for a couple of days waiting for a low-pressure system to pass. Leaving at the tail end of it, we enjoyed a spot of rain and mild squally conditions on the way to Cascais, Portugal, where we moored five days later. Here, the catamaran motors would have their first service by the local Yanmar dealer. A fishing town with a 16th-century fort that still stands today, albeit converted into a luxury hotel on the marina, Cascais attracts thousands of people to its gorgeous beaches. Winding stone lanes lead from the promenade through a pedestrianised old town, alive with throngs of happy people seemingly on eternal holiday.

Our next stop would be an overnight stay only 515nm away on the Portuguese island of Madeira. I hadn’t been there since I was a toddler ‘crewing’ alongside my mum, dad and brother during our first family voyage in 1984 aboard a 30-foot Miura called Ocean GypsyIT, which inspired my business name, Gypsy Yacht Deliveries. We anchored in a bay east of Funchal (the capital city of the Madeira archipelago), went ashore for a few fresh veggies and were off again the next morning.

São Vicente, a Cape Verde island a little over 1 000 nm away, would be another short leg before the long haul to Brazil. We had a Code 0 Genoa on board that combined the advantage of the massive sail area of a spinnaker with the ease of use of a furling system. Flying the ‘Big Black Ugly’, we were able to catch up with and pass the guys on Cheers, rubbing it in by ragging them about it over the radio.

Our sail to São Vicente was dreamy and without episode, and we arrived at Marina Mindelo early in the day, coming up stern-to alongside Gary (who, yes, had taken the lead on Cheers again). He was already sunning his laundry and knocking some to do’s off his list. Without rest for the wicked we were greeted by the marina manager, who told us to report to the office and pay. That night ‘Team South Africa’ went out to enjoy some of the local jet fuel at a bar where the walls were hung with musical instruments of every conceivable kind. Gary and I, each with borrowed guitars in hand, sat out on the pavement jamming with the locals.

The best route to Recife, Brazil, would take us over the equator at about 28° west. We aimed to limit the time and fuel spent crossing the ITCZ band, which is narrower the further west from Africa you sail, but go too wide and you risk putting your course at an uncomfortably close angle to the southeast trades once you cross into the South Atlantic high-pressure cell. Approaching South America it is vital to stay east of the South Equatorial Current, which splits at Cabo de Sao Roque, being sure to be swept south with the Brazil Current rather than west with the North Brazil Current.

Crossing the ITCZ we had only two or three days of calm. It was hotter than a Durban curry, so to ‘cool’ off and add a little playful release to our routine we swam off the boat in that 30° bath water I had been fantasizing about. Mid-oceanic water is soft and velvety, and comes in a shade of blue found nowhere else in nature – unimaginable to anyone but a sailor. Staring down into that vast azure expanse, beams of light illuminate never-ending pathways to a welcome abyss – it’s easy to imagine letting go of the world’s noise and plunging into its depths. On the days we chose to swim, we’d suffer a minor loss of distance, but for the sake of mirth and morale I believe it was a sacrifice worth making.

I often get asked what we do all day out there. Between boat handling, navigation, maintenance and cleaning, there’s still plenty of time for self-indulgence of one sort or another. Eating becomes an enhanced pleasure at sea so we tend to get very creative in the galley. My specialty is pan-fried pizza and, as a rule, on board everyone has to learn how to make vetkoek – no exceptions! If you don’t make ‘em, you don’t eat ‘em! The same applies to bread. For dinners, a chef could compete for the highly esteemed ‘Cordon Bleu’ title if the meal they created was voted superior to the dish cooked by the current titleholder. This accolade would absolve them of all dish duty as long as they held the title.

We played a lot of cards and I taught everyone Texas Hold’em Poker. The three boys on board lost interest very quickly when it became obvious that Danielle had an uncanny knack for winning almost every hand and appropriated our macaroni chips quicker than you can say Emergency Position Indicating Radio Beacon.

Being at sea is a great time to think or try something new – to draw, learn a new language, write a book or read a dozen. We are devoid of so many of the distractions on land: the shopping mall and TV, the mobile phone ringing and WhatsApp pinging, that we really get to enjoy the simple activities we used to as children. And how lovely it is to develop a different relationship with time, needed only to determine when to change watch and when to fill in the log. Otherwise, you are free to forget that it’s a Wednesday or a Sunday, and might find yourself sleeping at 3pm and awake at 4am.

We had unbelievable sailing to Recife, and crossed the equator east enough to enjoy some close-reach sailing. With the approach of Brazil came the scent of soil, growth, decay? and civilisation. We found a small marina in Recife and tied up for three nights. With coffers long since depleted of greenery, we were eager to locate a fresh-produce market that could satiate our craving for fruit. Our taxi driver, Pablo, played tourist guide all day for a song and a dance, goading us to try different street foods that were unique to Brazil. We drank the coconut water of young nuts skilfully opened at their top end with a few fell swoops of a machete, and marvelled at vegetables we’d never laid eyes on. 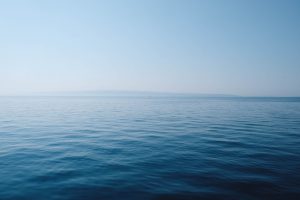 Back on the water, we turned east 150 miles north of Rio, making a slightly southerly arc along a great circular route to Cape Town. By this time we had caught our fair share of fish: four dorado, a wahoo, a barracuda, several bonito, skipjack tuna and, surprisingly, a marlin. I still hadn’t caught my all-time favourite – yellowfin tuna. But, on a sunny day in the mid-Atlantic the bungee went taut and I yelled to Nick to furl the genoa to reduce our speed. Hauling her in I could feel she was heavy and when the line dipped and the fish swam down – the tuna telltale – I knew we had one. Nick and I took turns hauling our trophy to the boat and when that golden belly surfaced behind the transom, on the count of three we each reached for a gill, and in a single motion hauled all of her 32kg onboard.

From Recife to Cape Town took a mere 26 days, seven days faster than my originally projected 33. Always nice finishing with a bang, our last three days were spent pounding into a gale-force southeaster, thus concluding our trial of the boats in all points of sail. They were impressive to wind, maintaining good momentum through direct swell, and proved to be a very fine balance of luxury, speed and aesthetics.

It was a memorable trip, not like some others immortalised for their difficulty but because of the lack of it. I’ll put this down to good planning, a fantastic crew and a lovely boat.