Crete is a land in one country. By far the largest of the Greek islands, it has a quality and temperament all its own. I’d visited Greece before, but always the smaller islands. My partner and I chose Crete this time for its size, diversity and the chance to hire a car and explore widely on our own, something not possible on many Greek islands. Crete offers the chance to relax on stunning beaches, hike its rugged mountains, visit the ruins of antiquity and sample its unique cuisine.

Having done a bit of online research and spoken to Greek friends, we decided to stick to the western half of the island, which is wilder, more rustic and less touristy. We flew into Chania, the biggest town in the west, hired a car and set off on a 10-day adventure.

Crete’s fascinating history stretches back through the millennia. This island is the birthplace of Europe’s first advanced civilization, that of the Minoans, who ruled here more than 4 000 years ago. You’ll find vestiges of their presence all over Crete, especially at the famed Palace of Knossos.

The island lies at the maritime crossroads of three continents. It’s been fought over and occupied by many invaders. The Romans had outposts here, while the later Byzantine influence is evident in magnificent frescoed churches and monasteries. The Venetians laid out the beautiful cities of Chania and Rethymno, both lorded over by great fortresses. Next came the Turks, who built strongholds and mosques around the coast. World War II saw Crete invaded once again, this time by German paratroopers. Many islanders still talk of the bravery of the struggle against the Nazis and the partisan hills that never surrendered. Cretan spirit remains one of courage, loyalty and a passion for liberty.

We spent our first night in Chania’s picturesque old town. Narrow alleys lead down to an elegant port lined with pastel-coloured buildings and punctuated with a domed mosque and spindly Venetian lighthouse. The town has excellent maritime and archaeological museums, while remnants of Venetian and Turkish architecture fill the lanes. There’s good shopping (especially for leather goods) and dozens of fine restaurants.

But our hearts were set on discovering rural Crete. The next day, we drove south across the island to Sfakia, where we caught a ferry to Loutro. This charming village has no roads – the only access is by foot or boat. Think turquoise water, whitewashed houses, blue shutters and the tranquillity of an enclosed anchorage. The bay was known in Biblical times (Paul the Apostle was here) and became a pirate lair, later a Venetian stronghold and eventually a Turkish outpost.

There’s not much to do here, except while away your days on Loutro’s two small beaches. If you’re feeling energetic, hike along the dramatic coastline through olive groves loud with the bleating of goats and tinkling of bells. In the evening, find a waterside restaurant and watch the moon caught fresh from the Libyan Sea roll a carpet of silver across the bay. 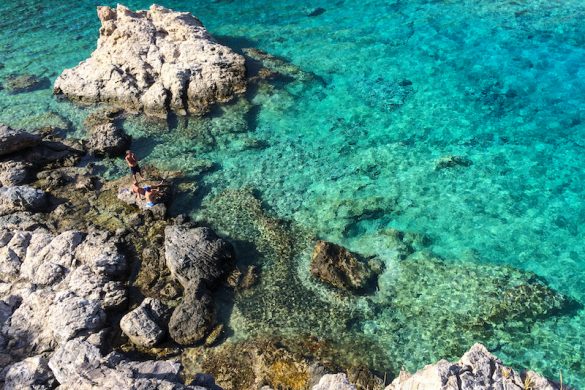 Next, we headed into the mountainous heart of the island. Amari is a fertile valley filled with vineyards and orchards fed by the snows of Mount Ida, the tallest peak on Crete. We rented a restored, stone cottage in the village of Meronas. It was a quaint hideaway with hammocks, pergolas and terraces that offered breathtaking views of the valley. The owner’s mother, who lived next door, cooked us traditional Cretan dishes (at no extra charge). The charming, grey-haired lady spoke no English, but arrived smiling each morning with such delights as chick-pea soup, stuffed courgettes, rice pudding and lamb-and-pea stew.

From Meronas, we explored the Amari Valley by car, hiked the surrounding hills, or simply sat at the local taverna and watched the world amble by. On one occasion, we ventured further afield to Heraklion to see the Palace of Knossos, the island’s most famous attraction and capital of Minoan Crete. Set on a hillside, it’s an impressive cluster of royal chambers, courtyards, private apartments and bathhouses. Much of the site’s excavation was conducted in the early 20th century by British archaeologist Sir Arthur Evans. His ‘creative reconstruction’ of Knossos was speculative and controversial, but nevertheless brings to life parts of the palace, including the unique tapering columns, painted red with gold-trimmed, black capitals.

A clever drainage system and innovative floor plan kept Knossos cool in summer and warm in winter. Look out for the palace’s famous Bull-Leaping, Dolphin and Lily Prince frescoes.

Gastronomic retreat in the mountains

From the Amari Valley we headed to the far west on the coastal road via Rethymno, a Venetian town with a vast fortress and a warren of streets clustered around a colourful harbour. We passed Souda Bay, a famous battleground in World War II, where the Royal Navy was bombed into retreat by the Luftwaffe. This attack was followed by waves of German paratroopers, dropped all along the north coast, who soon put the Greek and Allied troops to flight.

I pulled off at a German cemetery on the hillside next to Maleme Airfield, a strategic position during the Battle of Crete. We stood among rows of regimented, grey gravestones – young paratroopers, many of whom were shot before their boots touched Cretan soil – and thought about the futility of that terrible encounter.

Before turning south, we made a detour onto a headland whose northern tip boasts one of the most beautiful beaches in Greece. Balos lagoon and beach present a kaleidoscope of blue, green and turquoise waters. The peninsula has a savage beauty with towering cliffs, barren islands and white sand. It was an idyllic spot for a picnic lunch.

The road then led higher into the mountains on a winding track towards our final destination. We parked in a forest of chestnut trees and walked the last stretch to Milia, a medieval hamlet converted into a rambling hotel. The houses were built in the 15th century and renovated in the 1980s, retaining their rustic, old-world charm.

Milia specialises in authentic Cretan cuisine based on fresh produce. The vegetables come from an organic garden; meat and other products from local villages. There’s warm bread, baked in a wood stove, and mouth-watering traditional dishes such as roasted baby goat, vegetarian moussaka, lamb with herbs and zucchini pot pie. If you’re a serious foodie, Milia even offers cooking workshops.

Our days were spent hiking the hills: over dry stone walls, through olive groves and past herds of sheep, the air fragrant with the scent of rosemary and thyme. It was the perfect way to work up an appetite for the sumptuous dinners.

On our last evening, we climbed a nearby peak and looked out over the serrated spine of Crete. White mountains were cut with deep, wooded ravines that sliced to the coast where crescent bays basked in turquoise luxuriance. Our Cretan adventure had given us a bit of everything we’d been looking for: gorgeous beaches, mountain scenery, good hiking, ancient sites, history, food and culture. We would definitely be back for another bite of the Cretan apple.

TOP 5 THINGS TO DO 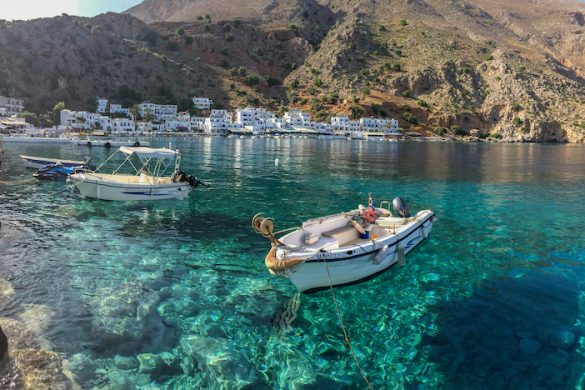 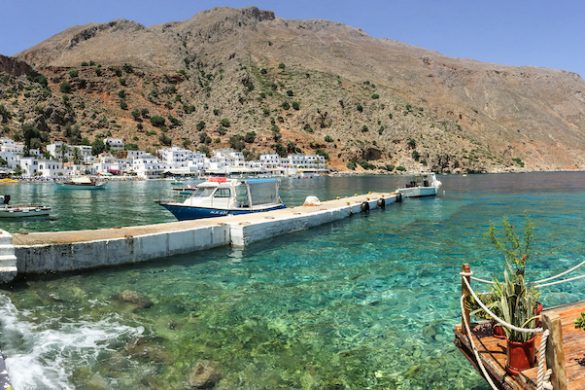 Winters can get very cold, especially in the mountains, while mid-summer can be scorching. We recommend spring and autumn as the best times to visit.

Crete’s two main airports (Heraklion and Chania) receive daily flights from most major European hubs. Search for the cheapest flights at travelstart.co.za or cheapflights.co.za, or with budget airlines such as Ryanair and easyJet.

Crete has good bus, taxi and ferry services, as well as a quality road network (visit we-love-crete.com). However, we found that hiring a car gave us the kind of flexibility we wanted. All the top car-hire brands (Avis, Hertz, Europcar) have outlets at the main airports.

The island has a vast array of accommodation types. One of the most affordable (and nicest) options is to rent a self-catering cottage or flat, which gives you complete independence. The best way to book is through an internationally recognised accommodation website such as tripadvisor.com, lastminute.com or airbnb.com.

We chose the following: