Chris Bertish took on the seemingly impossible task of being the first person to wing-sail across the Pacific Ocean. Setting off strong on his small craft, he faced challenges just one week in. Sadly, it was impossible to recover from these obstacles. We follow his trials and tribulations.

And Chris is off…

“I couldn’t think of a better way to celebrate World Oceans Day than starting on my two month journey across the Pacific! I’m officially off on my journey, and for the next 50-60 days I’ll be wing-foiling over 2750 miles to be the first person to wing-foil across an ocean, alone and completely unsupported.”

He continued, “The purpose of this project is to raise awareness and money for ocean health and conservation. Along the way I’ll be collecting important data on ocean science and putting together ocean classroom sessions, so I can teach people all around the world about the ocean, and why we need to come together to protect it”.
Thanks to my amazing partners Ocean Unite Sea Shepherd Conservation Society Conservation International and Armstrong Foils

For the love of the ocean

Chris partnered with Sea Shepherd Conservation Society on the TransPacific Wing Project, to raise money for their marine protection programs around the world. Sea Shepherd is an international non-profit marine conservation organisation that uses innovative, direct-action tactics to defend marine life and protect the ocean from illegal exploitation and environmental destruction.
The rise in illegal and overfishing has had a major impact on both the fish stocks and pollution, and put many species under threat of extinction. Sea Shepherd helps combat this by facilitating the arrests of unlawful fishing vessels and recovering thousands of illegal nets from the sea, saving the lives of countless marine animals.
“We are pleased to be working with Chris Bertish on this exciting initiative to raise awareness about the plight of the ocean. We must all do our part to protect our planet’s vulnerable marine ecosystems and wildlife, because if the ocean dies, we die.” said a spokesperson for the Sea Shepherd Conservation Society.
Captains log – 14th June
“The opportunity is in the obstacle” – Chris Bertish
Learn, apply, reset, implement, move forward.
I set a new world record – covering 212miles, on the open-ocean, unsupported wing-foil mission – and giving back to education, the ocean and the planet.
Success means something different to everyone. For me it’s about starting something that you have dreamed of and planned for years and implementing it. Getting to the start line is always my definition of success, if you achieve that you have already won, as you have often already done more than most, who simply talk about doing things, but that’s all that’s done.
Over the last couple of weeks and months we have had so much amazing support and help from so many different people, places, my team, friends and Half Moon Bay community and family.
We started planning this journey 18 months ago and last week I started the TransPac Wing Project expedition, on the perfect day that just happened to be on World Ocean Day! Serendipitous.

I started from Half Moon Bay for multiple different reasons, and one of them was so that when I left, I could skirt the coast south. This was in case there would be any major issues in the first 72hours before turning right – West – to head far offshore into the Pacific, as after that decision is made you are on your own and there’s no turning back.
At about 7pm on the second night, my little craft had a leak and I started taking on a little water from some point that was difficult to access. However, after a couple of hours I managed to address it and fix it with some expandable foam sealant, which I always take with me. I got through the next couple of days and then moved down into the Big Sur region where the fog rolled in and the seas increased to 2-4 meters with wind speeds of 25-35 knots. The conditions were very cold and misty where I couldn’t see more than 30ft in any direction for 36 hours!

Working through the challenges

No problem, just deal with it, that’s what I’ve prepped and trained for – working through those situations, through the day and night alone. As the winds started easing my main electronics systems drained, which shouldn’t happen  as I had been monitoring and managing things correctly. I always do this vigilantly on these types of expeditions, as it’s key to your success, and to the survival of the project.
I went onto my sea anchor until morning, so with the morning sun I could start recharging my systems. It was then that I realised that if I wanted to move forward across the Pacific without addressing these two key items it was not something I could do. It’s really that simple.
When this happens near the end of your journey, you find a way to make it work and get to the finish. But when it happens at the beginning of your expedition, and you have the choice to correct it or to move forward despite knowing that this could happen again, and not addressing it appropriately, is the definition of foolish and reckless.
On expeditions like this, like all others in extreme and remote natural environments, those decisions become pivotal decisions that save your life – don’t put yourself and many other resources at risk. It’s the difference between those that make it and those that often don’t come back at all.
Taking the longer route
So at this point I decided to take the route closer along the shore as the tracker shows and winged it to a couple of miles off of Morro Bay, so that I could get these issues I had already addressed, sorted out. But I knew that they would surely come up again and again on the journey.
As the wind died close off the Morro Bay entrance, I was in contact with the awesome team at the Morro Bay coastguard during the day so they knew that I was safe, but that I may need a short tow in once I got closer. Coming into the entrance of Morro Bay at night in the fog is radical. The coastguard was amazing and they saved me a 4 hour paddle as the wind had died. So stoked for the help from these guys. It was a very long day and I had been on this shift since 4am to 10pm that night. 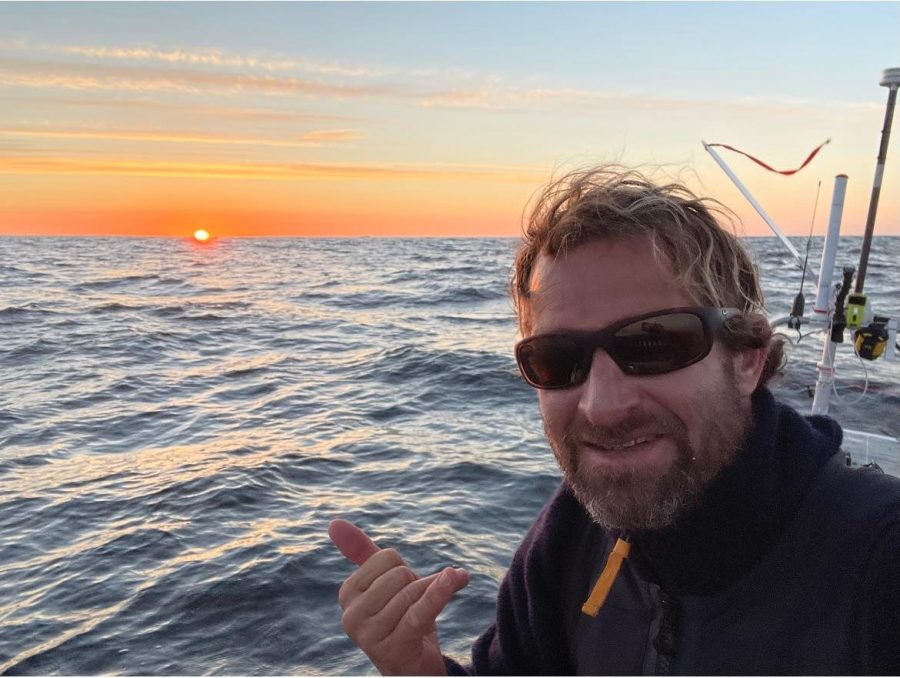 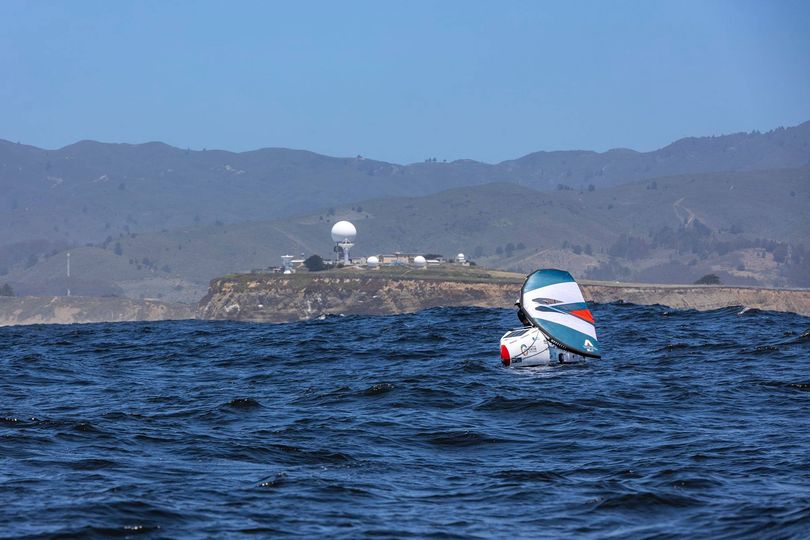 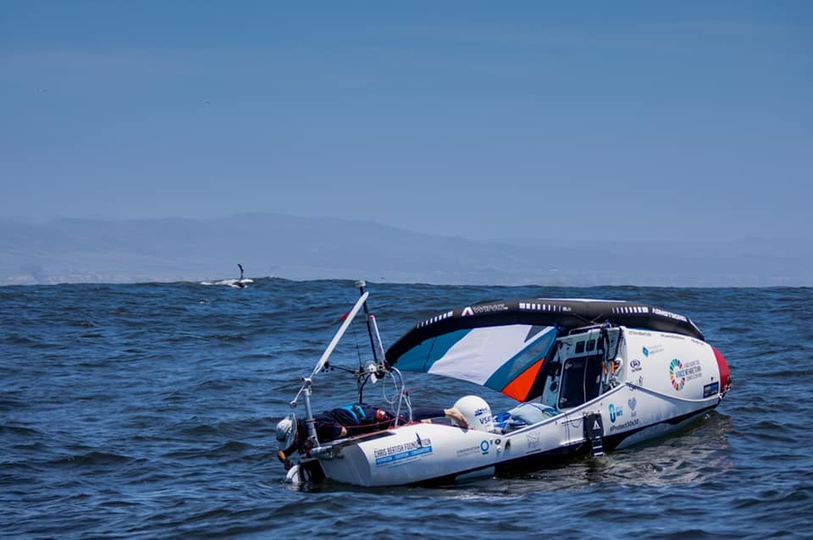 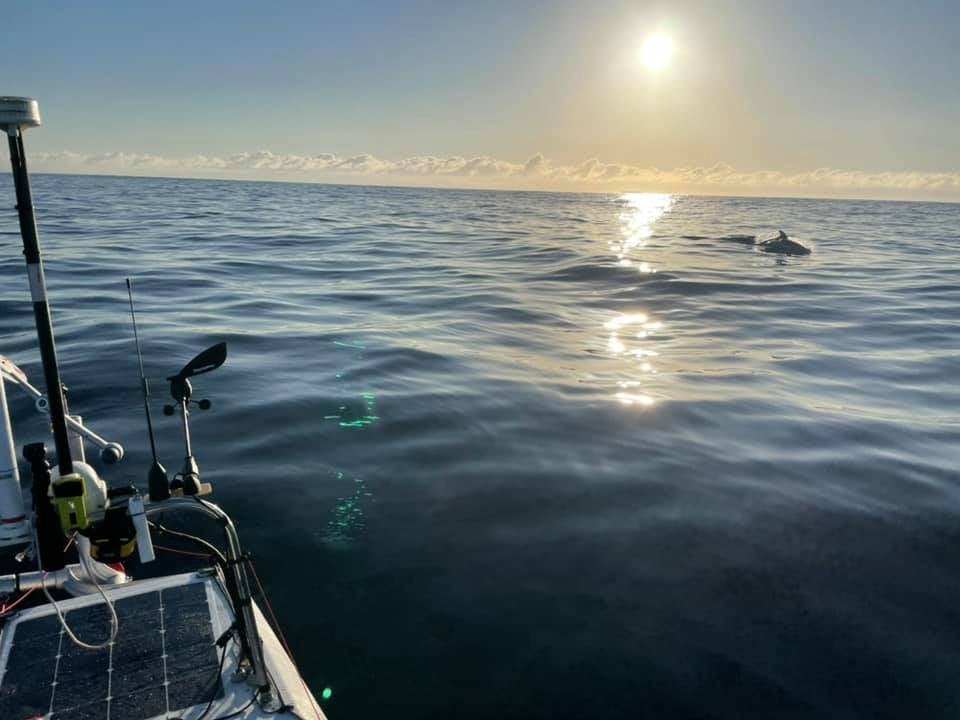 The end of the road – for now

I’ve wrapped up in Half Moon Bay, getting the craft out and trailering her north today to look at getting the electronics sorted. It might take some time, but that’s ok.
What an awesome ocean shakedown it has been, with another record set. There have been so many valuable insights, experiences and knowledge gained, which I can apply before I look at re-starting the next attempt. It will either be over the next month, or early next season. This depends on getting everything needed to get updated and fixed, before resetting and moving forward.
Either way I am very happy with the craft and wings and foils, and how she sails. I feel confident that once the issues have been sorted I will be able to do the crossing at least 15% faster than I had forecasted, which is amazing news.
Gaining knowledge and experiences, and making the right decisions are key to moving forward and to having the successful outcome intended, and to achieve all our goals – so that everyone wins!
That’s always the plan and I’m looking forward to continuing till it’s done.
Thanks to everyone for the amazing support all over the world and from my beautiful fiancé and team.
It’s just the start, reset and keep moving forward!
Read more:
Chris’ brother Greg Bertish is also doing amazing things
Another SA adventurer Peter van Ket’s row across the Atlantic to Antigua
AdventurerChris BertishPacific Ocean CrossingsailingTransPacific Wing Projectwing-foil
0
FacebookTwitterPinterestEmail
previous post