Debbie Hathway takes us on her Bush Break adventure to Limpopo South Africa where she experienced indulgent luxury and conservation.

As the crow flies west to east across Limpopo in South Africa, Motswari Private Game Reserve and Welgevonden Game Reserve are almost exactly in line with each other. One puts its weight behind rhino conservation, the other wages war against elephant poaching. Both are well worth a visit.

There was barely a dry eye in the audience at the end of the local launch of virtuoso pianist Tian Jiang’s CD, Motswari Fantasy Night Symphony, held recently at the scene of his inspiration.

Geiger’s Camp at Motswari Private Game Reserve in the Greater Kruger National Park hosted media and special guests on a windless night beneath a star-studded sky as Jiang played. He was later accompanied by owner and artist Marion Geiger-Orengo as she painted the subject they are all so passionate about. The rhino.

Marion’s husband Fabrice Orengo de Lamazière tells the story of their first meeting at a private concert given by Tian in Cape Town 12 years ago, when they discovered a mutual passion for music and wildlife. ‘His music is powerful, moving. Most of the crowd started to cry,’ says Fabrice.

‘Tian started to come regularly to Motswari, and one day we decided to host a crazy concert in the bush, in the middle of nowhere, with a grand piano. Soon after that we experienced the tragic death of a rhino poached on one of our properties.’ According to figures released by the South African Department of Environmental Affairs, at least two rhinos were poached per day in the Kruger Park last year despite overall poaching numbers dropping below      1 000 for the first time since 2012. South Africa has the largest population of rhinos in the world and savetherhino.org says most illegal activity occurs in this 19 485km2 protected habitat. 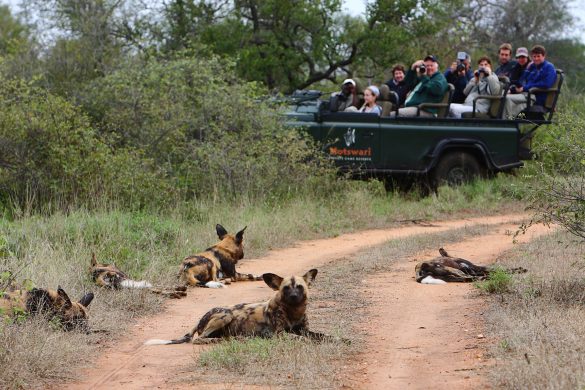 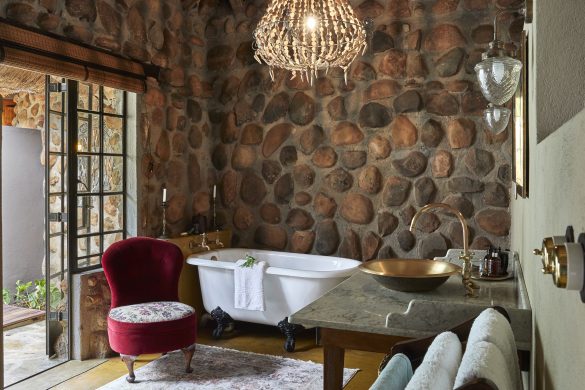 That poaching incident inspired Fabrice and Marion to establish Rhino Disharmony through which artists from many backgrounds unite to raise awareness of the animals’ plight through the only language that is understood internationally: art – from music to painting to sculpture to poetry. Tian was their first Rhino Disharmony
ambassador.

Motswari is a second-generation family-owned property located in the Timbavati and Umbabat private nature reserves. It’s Big Five territory, a wild and unspoilt part of South Africa’s bushveld region that provided the inspiration for the design and decoration of Geiger’s Camp. ‘It’s also about a soul holiday,’ says Marion. ‘It’s not just coming into a beautifully decorated place where you’re an observer.’ In fact it’s a homely space, layered in bohemian chic, where people should feel comfortable enough to put their feet up on the couch or take an afternoon nap on a lounger next to the pool.

There’s no doubt that Motswari offers fantastic wildlife experiences, great food, beautiful bedrooms with fantastic beds and fine linen. But what makes it stand out from the rest? ‘There’s no secret,’ says Fabrice. ‘It’s just love and passion for art and nature, and the staff, whom we are proud to call our family. This is Geiger’s Camp.’ 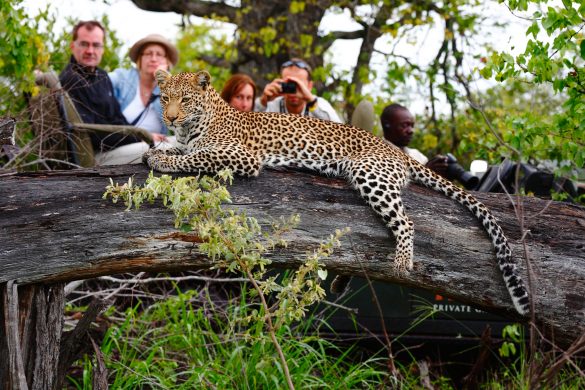 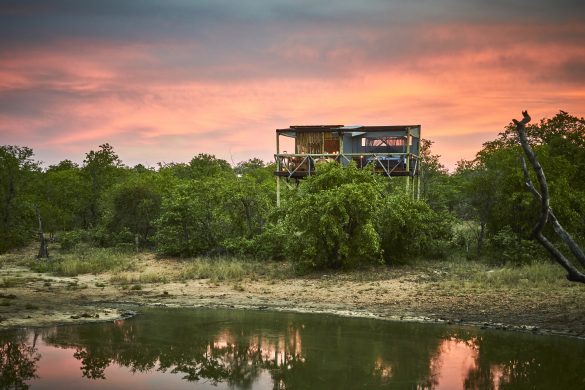 Conservation is also the prime focus for the owners of Mhondoro Safari Lodge & Villa located in the 35 000 hectare Welgevonden Game Reserve in the Waterberg. Guests are lucky enough to experience their vision and see the results of the highly successful elephant anti-poaching efforts. The elephants’ favourite party trick is drinking out of the swimming pool, even if guests are cooling off in it, often preferring that to lumbering along to the lodge waterhole.

Activity at the waterhole can also be seen up close via an underground tunnel that leads to a game-viewing hide, affording keen photographers the most incredible opportunities to capture their subjects on film. All frivolity aside, protecting 100 African elephants as well as the rest of the Big Five, more than 129 other mammal species, 350 birds and 2 000 plant species is serious business for the Dutch owners. The world’s largest land animals are classified as vulnerable since they remain under threat from poaching, habitat loss, and human-wildlife conflict. Since 1979, African elephants have lost over 50% of their range and this, along with massive poaching for ivory and trophies over the decades, has seen the population drop significantly. In the early part of the 20th century, there may have been as many as 3 to 5 million African elephants, but today there are only around 415 000 left in the world. 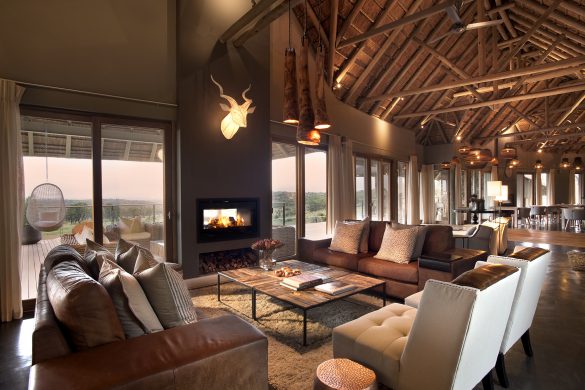 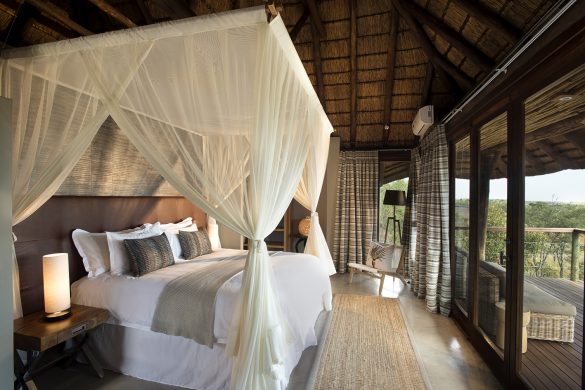 The interior design at Mhondoro is described as a fusion of African chic and edgy European influences. That might have had something to do with their walking away with the Best Safari Retreat in the World, Best Family Villa in Africa as well as Best Bush Lodge in Africa titles at the 2018 Haute Grandeur Global Hotel Awards in Dubai. But more than that, as is often the case at these special reserves, it is the wealth of knowledge you gain in the hands of experienced guides and the sense of wellbeing you take with you after being hosted by incredible managers and staff that makes all the difference.

Good to know for travelling families is that Mhondoro is child-friendly and welcomes children of all ages. They can run free at the dedicated open-air play area, which is protected by an elephant fence, or amuse themselves in the playroom in the main lodge without disturbing other guests. Special children’s activities can be arranged on request. 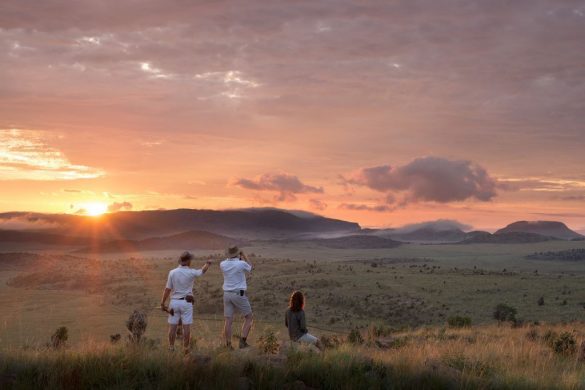 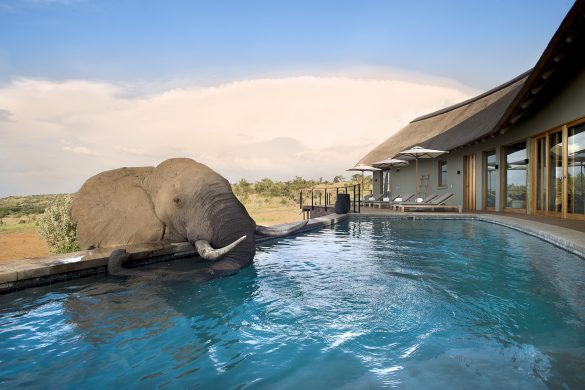