Adventurer, surfer and philanthropist, Greg Bertish joined friends in Mentawai to visit a surfing legend, explore islands, and to surf the waves of their dreams.

Moose sailed to the Mentawai Islands in the late ’80s and never really left. The surfers’ Holy Grail had been found. Moose, now 62 years old, is a Kiwi who is still as stoked on the waves of Mentawai, as he was almost 30 years ago. He surfs most sessions with his guests (often after they are too tired to carry on), and he surfs hard and fast, like many youngsters wish they could.

I first met Moose in 2011, but his reputation had preceded him, and we’d actually been in communication via email for a good few years before that. I had assembled a crew comprising both my brothers and some good mates. The seven of us missioned from all corners of the globe to meet ‘the Moose’ and his old wooden ketch, Kuda Laut (which means seahorse). It was a game-changing trip for us all – we found and surfed islands and waves that we had dreamt of, but never knew existed.

Fast forward eight years and the whole playing field looks a little different. Not only did our crew have a few more grey hairs and a bit more disposable income than before, but Moose too had changed the game and taken his offering to a whole new level. For 30 years Moose has run charters and trips out of bustling Padang in West Sumatra. He would cross the Mentawai Strait every two weeks on the 58-foot Kuda Laut, and head for the string of islands that lie 100 miles to the west.

Over the years, Moose developed a reputation for getting surfers to the best and least crowded waves they’d ever experienced. Clients and surfers would come back full of tales of magical waves, secret islands and waters, and jungles that were abundant and almost untouched by the Western World.

All the while, Moose dreamt of the most amazing surf-explorer boat imaginable. He dreamt of a 75-foot power catamaran that would sleep up to 14 clients, cruise at 10 to 12 knots with ease, be stable, be comfortable and be very seaworthy. His dream was ‘crystal clear’ (he would later name his boat just that). 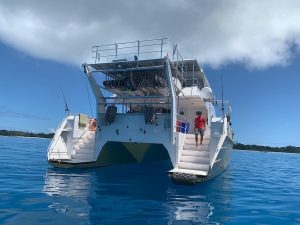 Boarding our surf searcher on the evening of 28 April last year was when the reality of our adventure hit home. We also discovered just how special this boat actually is. She is constructed from aluminium and was purpose-built, under Moose’s watchful eye and guidance, in Surabaya. Over the course of two years, his dreamboat took shape and his dream was realised. Space is the big luxury. A massive saloon that comfortably seats 14, there’s aircon throughout, and beer, coffee, cold drinks and Beng-Beng chocolates on tap. Add to that awesome chillout decks and spaces, both forward and aft, warm freshwater showers inside and on the stern, four large cabins and a massive galley. Cooki the chef was incredible and served top-draw meals ranging from burgers, sushi and steak to prawns, mi goreng and Mexican dishes.

No man was left unsatisfied. The boat is so comfortable and so well run, that even non-surfing families and partners love the set-up and join the trip to find their paradise. What transpired over the next 11 days was a blur of islands, beaches and barrels.

Moose chased waves through the islands by night and by day. Each morning before sunrise we would arrive at a new island and a new wave. Every day we surfed an average of four to seven hours. At most of these sessions, our group was alone in the line-up; sometimes it was shared with another boatload of surfers from a camp or charter nearby. But on most days, Moose would zig when all other surf charter boats would zag, and we would often score sessions in paradise, trading waves with just our mates.

The amazing thing was just how much our group was absolutely able to let go! The boat has no WiFi, but you can purchase very cheap SIM cards locally that generally work all over Indonesia, but not always where we ended up. If you go exploring, really searching and chasing waves, then you go beyond! Beyond and on the path less sailed, and to the islands that have no cell towers, no 3G networks and very little access to the outside world. That world of work, kids, emails, elections and stress slowly seeped away and a beautiful chilled tropical vibe took over. It was absolutely fantastic, and so were the waves.

Bat Island is the ultimate tropical island. I was the only human there and I walked around it in 10 minutes and then surfed both the left- and right-hander that peeled off each side. At Outer Moose’s, we scored some slabbing barrels with not another surfer in sight, and at The Left and Franklins, we surfed beautiful big clean walls for days and days. We shredded A-frames, ripped it up at Little Nias, got some barrels at Sleepy Wave (she was not so sleepy), and surfed with Jordy Smith at Hollow Tree’s Resort. Then it was off to the next island while trolling lures and hooking skipjack and Spanish mackerel along the way. 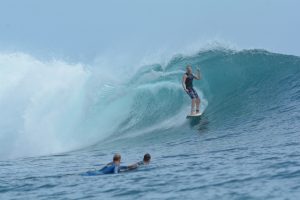 Our days ran something like this: (excerpts from Paul’s diary)

Day 1: Arrive in Padang. Transfer to hotel for burgers and beers; transfer to boat 6 pm. Departed for the crossing; heavy seas all night. Thank goodness for this boat.

Day 2: Awoke to beautiful islands and tropical blue waters. Some guys went for a swim, then breakfast and first surf at Telescopes 4 to 5 feet. Just us out – glassy and some fun waves. Lunch. Second surf cleaner and cooking; surfed until dark.

Day 3: Telescopes cooking again. Two sessions before lunch. Went ashore, walked the jungle and beach, and visited a lodge for a beer. Cooking waves at Sleepy Wave, until some pro surfers arrived. Surfed Icelands alone and had sundowners. Beautiful!

Day 5: In the water at 6 am; cooking. Another session after lunch; surfed with a girl who is 85% blind, so inspirational. How lucky are we? Steve pulls his hammy. Another boat arrives, but waves cooking till dark.

Day 6: Woke and surfed a beautiful right-hander in a beautiful bay, just us. Lunch is awesome Mexican. Cooking waves at The Left that evening. Depart for Macaronis and Nic catches a skipjack.

Day 7: Macaronis has too many boats. Head to Bat Island and have a day of really fun waves on lefts and rights all by ourselves. Visit the caves. Cruise three hours to Hollow Trees along some of the most beautiful coastline I have ever seen. Surf with and watch Jordy going off. Steve catches a Spanish mackerel. Sushi for starters tonight.

Day 8: No boats at The Left; 4 to 6 feet with 8-foot waves cooking. Three sessions. Karl breaks his board. Amazing day and awesome chow of prawn curry.

Day 9: Surfed The Left all morning. Head to Hollow Trees. Ant catches a big fish. Sushi tonight. Surf with and watch Jordy again in cooking 4-to-6-feet surf. Visit the lodge – some guys have massage and beers.

Day 10: Travel to Franklins; small waves but fun and no one else. Headed north, surfed The Vault and got some barrels till dark. A big game of ‘quarters’ till late.

Day 11: Woke to cooking A-frames; 3 to 5 feet and empty. We all scored. Surfed Little Nias and then Outer Moose’s alone in the evening. Wow! Departed for the calm and beautiful crossing back to Padang. What a trip! The fact that the best skipper and guide in the Mentawai Islands now has the best boat means that one thing is crystal clear, we will return, and this time we won’t wait another eight years! 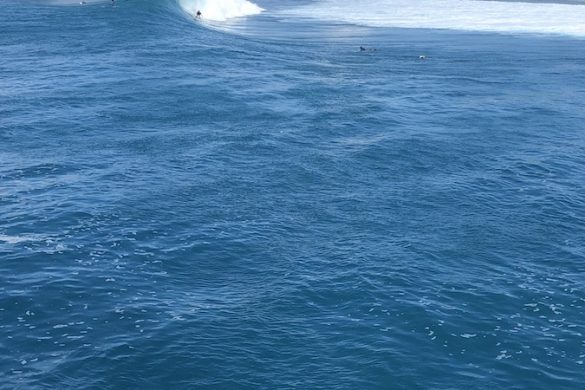 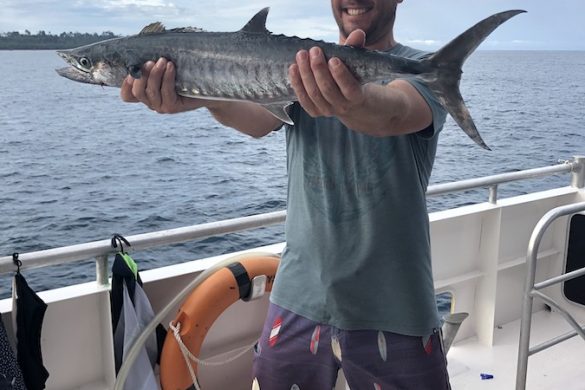 Podcast with the Pro: Off Watch with Dee Caffari

We Care: The Deal that Saved the Seychelles

A Recap of the America’s Cup World Series

The America’s Cup in High Speed